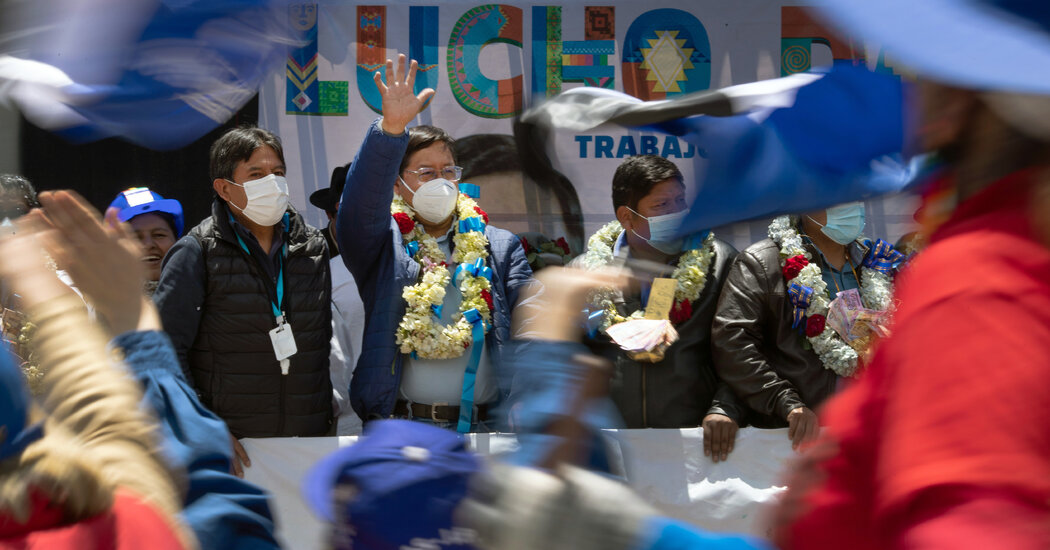 In the last year, Bolivia’s democracy suffered as partisan clashes filled its streets and mistrust in government grew. And yet it pulled off a calm, uncontested election. What can it teach other democracies under siege?

LA PAZ, Bolivia — As nationalism, misinformation and the pandemic have emerged as threats to democracy — and a presidential election has roiled the United States — the relatively small nation of Bolivia, in political upheaval for most its 195-year history, managed a free and fair vote.

It did this amid extreme polarization and racial division, on the back of violent protests, while battling voter distrust and fighting one of the worst coronavirus outbreaks in the world.

Luis Arce, a former economy minister, won with 55 percent of the vote, a clear sign that much of the country embraced his party’s socialist project. The feared mass protests and violence never happened. And voter turnout hit a historic high at nearly 90 percent.

Political analysts say Bolivia’s improbable achievement is rooted partly in exhaustion with uncertainty, a well-received government plan for voting, and a pledge by the trailing candidate to respect the outcome. Even with far fewer resources and more challenges than many nations, has Bolivia offered the world a teachable moment?

Image A campaign poster of former President Evo Morales remained along an underpass in El Alto. Mr. Morales was a towering figure in Bolivian politics who lifted many out of poverty.Credit…Tyler Hicks/The New York Times

Approaching its Oct. 18 election, Bolivia was intensely divided between supporters and critics of Evo Morales, a larger-than-life former leader who had been the country’s first Indigenous president.

For 14 years, Mr. Morales had run Bolivia, transforming the country by lifting hundreds of thousands out of poverty, including many Indigenous Bolivians who for centuries had been relegated to the margins of society. Mr. Morales’s election was historic, but he lost supporters as he persecuted opponents, harassed journalists and stacked the judiciary in his favor.

In late 2019, his attempt to run for a fourth term ended in allegations of electoral fraud, and in demands from protesters that he step down. The police and armed forces soon joined the call, and he fled the country. Supporters called his ouster a coup.

In the turbulent year that followed, the country was run by a temporary president, Jeanine Añez, who persecuted Mr. Morales’s allies and terrified much of the Indigenous population with harsh anti-Morales rhetoric.

After Ms. Añez took power, at least 23 Indigenous civilians were killed during pro-Morales demonstrations. State agents were responsible, according to a recent report by the International Human Rights Clinic at Harvard Law School and the University Network for Human Rights. No one has been held accountable.

Many Indigenous Bolivians feared that a future with Ms. Añez — or any conservative candidate — meant a return to the past.

As the country approached the vote, many on both sides were boiling with anger. There was limited trust in the election system, and widespread concern that the result — in any direction — would lead to violence from furious voters.

“All of us are scared,” Aida Pérez, 27, a Mesa supporter, said in the run-up to the vote. After the last election, she said, angry Morales supporters had thrown rocks at her.

Electoral observers who had come from around the world, as well as Bolivian experts and voters, attributed the successful vote to several factors.

First, in the aftermath of the 2019 crisis and the mistrust it engendered in the electoral system, Bolivia worked to patch the failures and loopholes in its institutions and processes that had led to problems.

The country overhauled its electoral tribunal, previously filled with Morales loyalists. This was done with input from various stakeholders: The tribunal’s new president, Salvador Romero, was appointed by Ms. Añez, but only after a negotiation between members of the main parties.

Then, in the months leading up to the election, the tribunal undertook a wide-scale voter education campaign, including television, radio, newspaper and social media advertisements that sought to repair faith in the voting system by informing the public of changes.

The campaign assured Bolivians of the security of electoral materials, explained how to check registration and demonstrated Election Day safety measures meant to protect against the virus. A series of videos also promoted the idea of voting as a chance to unite the country.

“This generated trust,” said Naledi Lester, an expert working with The Carter Center, an election monitoring group, to assess the vote.

Second, the approach of the underdog candidate helped assure a smooth result. Mr. Mesa said repeatedly in the run-up to the election that he would accept the count even if he lost — and he conceded the day after the election, once it was clear, from exit polling data, that his opponent held a significant lead.

“There wasn’t violence in Bolivia,” said Fernanda Wanderley, who runs the socioeconomic institute at the Universidad Católica Boliviana, because Mr. Mesa and his followers lost, “and they accepted that they lost.”

Ms. Añez also accepted the result immediately, as did governments as varied as the United States and Venezuela.

On Sunday, Oct. 18, about seven million Bolivians walked to their polling stations — most businesses shut and driving was prohibited — standing six feet apart and wearing medical masks as they waited to cast ballots.

Poll workers sprayed them with disinfectant as they entered voting stations, which were mostly schools with large outdoor patios.

After a painstaking hand count, Mr. Arce emerged victorious, with 55 percent of the vote, 26 points ahead of Mr. Mesa.

Days later, Mr. Arce held an enormous celebration rally in his stronghold of El Alto, just outside La Paz, the country’s administrative capital, and thousands danced for hours, with no incident. “My heart is happy!” yelled one voter, Nicolasa Balboa, 60.

The Organization of American States, which had harshly criticized the 2019 vote, called this year’s election “exemplary.”

First, the enormous margin in Mr. Arce’s favor made it difficult for his opponents to question the results.

But more important, many in Bolivia attributed the high voter turnout and relative calm to an overwhelming desire to return to democratic norms after a year of particularly acute upheaval.

Standing in line to vote many Bolivians described the act — and respect for the result — as a moral duty.

“We never should have arrived at this moment,” Verónica Rocha, 38, a Mesa supporter in La Paz, speaking of the year’s sometimes violent polarization.

“But unfortunately we have. And although the path forward may be difficult, it’s time to begin rebuilding institutions — and our social fabric.”