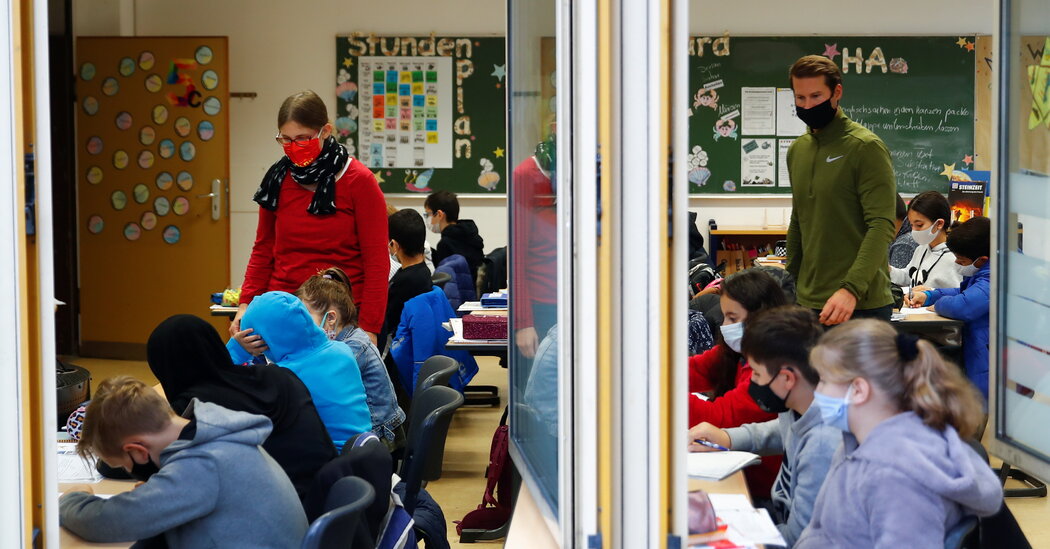 Image Returning to secondary school this week after the autumn holidays in Bonn, Germany.Credit…Wolfgang Rattay/Reuters

Wide-reaching national restrictions in Germany and France will soon touch almost every corner of public life — with the exception of schools and day-care centers.

Not everyone is happy with the decisions, but policymakers are taking extra precautions to reduce the risk, including mask requirements, the regular airing of classrooms and the split use of schoolyards during breaks.

Around the world, there is growing concern that the pandemic is doing lasting harm to the academic and emotional development of an entire generation of children and making it harder for parents, especially mothers, to work from home. Violent assaults against women and children also increased during lockdowns.

Expert opinion: While opening schools is not risk free, with proper precautions, the rate of coronavirus transmission in schools is relatively low; children who get infected tend to have mild symptoms; and measures like mask-wearing, social distancing and air circulation are more effective than predicted.

Two weeks after the beheading of a French schoolteacher, three people were killed in a knife assault at a church in Nice, in what officials called an act of terrorism. It was quickly followed by two similar events, though it was unclear if they were coordinated.

“Very clearly it is France that is attacked,” President Emmanuel Macron said after traveling to Nice. The French authorities placed a jittery country on its highest terrorism threat level.

The killings came at a time when the government’s recent words and deeds have put it at odds with Muslims in France and abroad, including heads of state like President Recep Tayyip Erdogan of Turkey.

Related: While many French people see the government’s response as an uncompromising defense of the country’s safety and freedom of expression, France’s nearly six million Muslims, almost all of whom condemn violence, are bewildered and fear they are all being labeled terrorists.

The presidential battleground of Florida lured both President Trump and former Vice President Joe Biden to Tampa on Thursday as the candidates increased their efforts in a state that is once again shaping up as the most elusive prize in next week’s election.

Now behind in the polls, the president sought again to win over independents and moderates with a message about corrupt Democrats. Mr. Biden, meanwhile, attempted to build up his margins with Latinos, a diverse demographic in Florida that he has struggled to galvanize.

The rare convergence of the two men in the same state on the same day — with Mr. Biden appearing at a drive-in rally Thursday night in Tampa — was one of the clearest signs yet that both candidates not only see their political fortunes tied to the state, but are also far from confident that they are ahead there.

The numbers: Nearly 80 million Americans have cast their ballots ahead of Election Day, which is next Tuesday (see our Back Story about voter turnout below). Polls show the race tightening, but most still show Mr. Biden in the lead.

SCOTUS: In two decisions welcomed by Democrats, the Supreme Court on Wednesday let election officials in Pennsylvania and North Carolina accept absentee ballots for several days after Election Day. Justice Amy Coney Barrett, who joined the court on Tuesday, did not participate in either case.

If you have 5 minutes, this is worth it

“Please help us,” said Yagubiya Hamidova, a cardiologist who had recently moved from a frontline town to Barda. “No one in the world knows what is happening to us.”

Jeremy Corbyn: Following the release of an investigation from the British human rights watchdog into anti-Semitism in the main opposition Labour Party, the party suspended its former leader after he deflected blame for the handling of the allegations, sending shock waves through British politics.

South Korea: The country’s Supreme Court upheld a 17-year sentence for former President Lee Myung-bak and ordered him back to prison. He was charged in 2018 with corruption, including accusations that he had collected millions in bribes.

Snapshot: Above, Elise Lauriot Prevost, an intern at a Parisian law firm who is struggling to pay off student loans. Like millions of young people across Europe, she has suddenly found herself shut out of the labor market as the economic toll of the pandemic intensifies. Years of job growth have eroded in a matter of months, leaving more than twice as many young people than other adults out of work.

Lives Lived: Diane di Prima, the most prominent woman among the male-dominated Beat poets, who published some 50 poetry books and chapbooks over her long career, died at 86 on Sunday.

What we’re reading: This Bloomberg article about the K-pop stans fighting QAnon and becoming a force on social media. “It’s a complex and interesting tale of one of the most devoted fan bases in music,” says Melina Delkic, who writes the Asia briefing.

Cook: This giant couscous cake with roasted pepper sauce is very versatile. You can substitute the couscous with other cooked grains or make use of whatever herbs, cheeses or spices you have on hand.

Watch: Looking to be thoroughly terrorized this Halloween season? Here are 13 devilish films that will have even the most stoic souls jumping at shadows.

Make: This Halloween, make a papier-mâché mask to go over … your mask. Treasures from your recycling bin will provide inspiration for a whole menagerie of critters.

It’s almost the weekend. At Home has ideas on what to read, cook, watch and do while staying safe at home.

Since the 1960s, between one-third to one-half of eligible voters in the United States have stayed home, resulting in one of the lowest turnout rates among similar countries. Just under 56 percent of the voting-age population, or 136.8 million people, went to the polls in 2016, the Pew Research Center found.

That was an uptick from 2012 but down from the highest recent peak for Americans, in 2008, when 61.6 percent of voters turned out and gave Barack Obama his first term as president.

“I try to avoid it because it gets angry and nasty,” said Susan Miller of voting. She said the only time she had ever cast a ballot was for Barack Obama in 2008.Credit…Hannah Yoon for The New York Times

So far, there is record early voter turnout for the election on Tuesday, especially in battleground states often decided by slim margins. But some will still opt out: Politicians “rent space in my brain and they frustrate me, but in the end, they do what they want anyway,” Fannie Sanchez, 44, who voted once for Barack Obama, told our reporter.

Voter apathy appears stronger among young Americans. Fewer than half of those 18 to 29 voted in the 2016 presidential election — about 15 points lower than the overall turnout. That seems to be in sync with the rest of the world: The Upshot found in an analysis of global voter data that young people don’t outvote their elders anywhere.

But in countries where overall voter participation tends to be high, turnout among the younger age group tends to be high, as well. Researchers have found it can come down to a few factors: voting being a habit formed over time, opportunity cost (like less flexible employment schedules or less financial cushion) as an obstacle and participation in alternative political action methods, like protesting.

That’s it for this briefing. See you next week.

Thank you
To Theodore Kim and Jahaan Singh for the break from the news. Melina Delkic wrote today’s Back Story. You can reach the team at briefing@nytimes.com.

P.S.
• We’re listening to “The Daily.” Our latest episode is about the specter of political violence in the United States.
• Here’s our Mini Crossword, and a clue: “Rapper with the most charted Billboard songs of all time (229)” (five letters). You can find all our puzzles here.
• P.S. The word “whalesuckers,” a nickname for the fish that attach themselves to large marine animals, appeared for the first time in The Times yesterday, according to the Twitter bot @NYT_first_said.
• Nikita Stewart, a reporter on our Metro desk, is being promoted to assistant editor.

Wintry Scenes From a Swedish Wonderland

Plastic flow into ocean expected to triple by 2040, action could stem tide more than 80%: Research lays out viable pathway to ‘break the plastic wave’