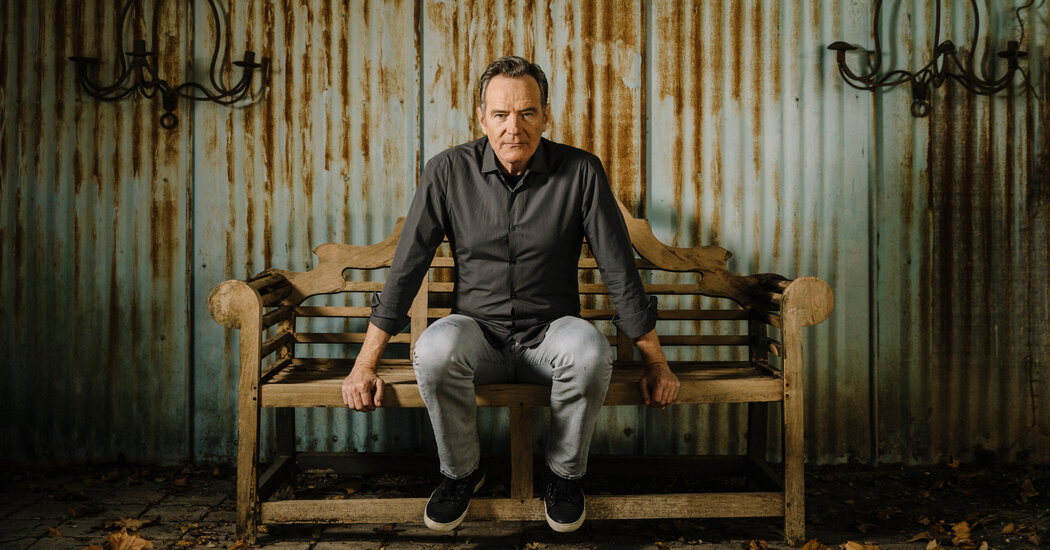 “It’s the best premise anybody has ever said to me,” Peter Moffat said.

Three years after first hearing that concept, he is still excited. It doesn’t take much of the first episode of the mini-series he developed from it, “Your Honor,” to make you share Moffat’s enthusiasm.

And it doesn’t hurt that the star is Bryan Cranston.

“What I thought was, ‘Wow, this is a great premise, and what a dynamic first episode,’ Cranston said of the first time Moffat described it. When you can summarize the story to a friend, he added, “and at the end of this little elevator pitch they go, “Wow, I’ve got to see that,” you know that your original instinct was correct.”

But what happens when an instinct leads you astray? It’s an uncertainty at the heart of “Your Honor,” a 10-part thriller set amid a tangled web of political, criminal and racial rivalries, premiering Dec. 6 on Showtime. Adapted from the Israeli series “Kvodo,” the story draws its force by thrusting a father into a predicament that worsens at each step because of the strongest instinct he knows: The drive to protect his son.

Before he entered television, Moffat, 58, worked as a lawyer in London, specializing in criminal defense — an experience that fueled the creation of such series as the courtroom drama “Silk” and “Criminal Justice,” on which HBO’s “The Night Of” was based. (Moffat was an executive producer.) He thought he knew his way around touchy situations and ethical conundrums.

But in 2017, a hypothetical query from the producer Liz Glotzer sent his mind spinning. What would you do, she asked him, if your son hit someone on a motorcycle and left him on the side of the road, dead or dying?

The answer felt obvious to Moffat: He would go to the police and explain what happened.

“Then she added, ‘But what would you do if you discovered that the boy he killed was the son of the main man in the biggest, most vicious crime family?’” Moffat said in a recent three-way interview with Cranston. “I was almost immediately writing the hundred next questions.”

Cranston, 64, whose breakthrough role was the chemistry teacher turned meth mogul Walter White in “Breaking Bad,” was a natural fit to portray the father. In “Your Honor,” his Michael Desiato must scramble to cover his son’s tracks as a vengeful mobster (Michael Stuhlbarg) closes in. Inaction isn’t an option — neither is prison — and Michael’s choices quickly lead him down a path of deceit and criminality.

And perhaps now is a good time to mention that Michael is a criminal-court judge in New Orleans with a best friend (Isiah Whitlock Jr.) running for mayor.

What could possibly go wrong?

Image “There’s absolutely a relationship between lawyer and actor in terms of performance,” said Peter Moffat, center, pictured on set with Amy Landecker, Cranston and the director Clark Johnson.Credit…Skip Bolen/Showtime

Plenty, as one might guess, but as Cranston noted, “That’s what makes good drama.” He and Moffat, both fathers, convened for a video call earlier this month to discuss their new series and its thorny moral conundrum — the writer from his home in London, the actor from New Orleans, where he was still shooting, unruffled even as his internet connection kept dropping. These are edited excerpts from that conversation and follow-up emails.

Peter, how did the partnership with Bryan come about?

PETER MOFFAT He was our first and best idea for who we thought could play this part. If you’re walking down the streets with him, someone might come up and say something like, ”Keep on doing what you’re doing.” Which clearly doesn’t mean, “Carry on being a chemistry teacher who has cancer.” Everybody feels in Bryan some kind of inherent decency, that he has integrity. His character [in “Your Honor”] has such a long way to fall, so it’s very important that the star of the show gives him a long distance to fall from. It’s also important that who we cast have that kind of agile intelligence, and Bryan has that, too.

BRYAN CRANSTON We first met in a Los Angeles restaurant and he kind of laid it out in his very energetic, excited way — you have a boyish charm about you, Peter. [Laughs.]

MOFFAT I think I remember going through the story episode by episode, and around Episode 4 he said, “Are you going to give me all 10 of these?” I thought, “Oh [expletive], I better shut up.”

CRANSTON Basically you go on the premise and the trajectory of both the story and the character. I am very attracted to characters that are conflicted and troubled.

CRANSTON And those are the protagonists. [Laughs.] It’s when they stumble that I’m interested, and when an audience is interested to see if they get back up, how they proceed with bloody knees and all.

How did you ensure authenticity?

CRANSTON I did research here in New Orleans, shadowing a superior court judge for a week and then also visiting other courtrooms. I often get the question: “What are you looking for? How can I help you?” And the answer almost invariably is: “I don’t know what I’m looking for.” I’m just soaking it in and not trying to edit anything at that point.

“Michael Desiato is not accustomed to purposefully making the wrong decision,” Cranston said of his character, a judge whose son (Hunter Doohan) is in a hit-and-run.Credit…Skip Bolen/Showtime

MOFFAT And hoping that nobody is behaving differently because Bryan Cranston is sitting in that courtroom.

CRANSTON That’s the trick. And it is a little tricky.

Do you feel there’s some degree of acting in the courtroom?

MOFFAT There’s absolutely a relationship between lawyer and actor in terms of performance. But I also think that lawyers are writers because they have to structure what a jury is listening to. And there are all these skills of pretense and artifice. For example, pretending that you don’t know the answer to something when you do, or pretending to be spontaneous when you’re absolutely not. I used to write all my cross-examination hours in advance. If you’ve done it well enough, you will always get the right answers and you’ll never have to think on your feet.

CRANSTON God forbid you’d have to think on your feet, Peter.

MOFFAT Exactly. Can you imagine? [Laughs.] The greatest thing for me writing an American legal drama was that the lawyers can move and not wear wigs. We’re stuck in the 17th century in Britain, stiff and wearing horsehair on your head.

In the wake of this year’s protests over racial injustice, there’s been an acceleration in rethinking dramas about law enforcement and the justice system. It’s just not possible to do them as before.

CRANSTON I think you’re right — you can’t and you don’t want to. From the very beginning Peter was talking about the systemic racism within judicial systems, especially here in the United States — the predominance of African-Americans in the prison system. It was important to get that right, especially in our medium — [for viewers] to see that and realize it’s institutional slavery, in no uncertain terms. Furthermore, when you plant your flag in New Orleans, it’s a predominantly African-American population, and you want to tell that story correctly and be true to it.

MOFFAT I’ve been in lots of prisons in the U.K. and felt myself to be reasonably unshockable. I couldn’t believe it when I came to the United States; as part of my research, I spent many weeks at courthouses in Chicago and New Orleans, and I visited Orleans Parish Prison and the Louisiana State Penitentiary in Angola. It’s a conveyor belt, the justice system, right? Its job is to put poor, disadvantaged people who commit criminal acts in cages for quite long periods of time. It felt very important that we show a bit of that.

“I am very attracted to characters that are conflicted and troubled,” Cranston said. Credit…William Widmer for The New York Times

CRANSTON It’s part of an unfortunate American culture of single use and the throwaway society. You don’t fix anything anymore: If something breaks, you throw it away and get it new. And that’s the same thing, unfortunately, we did with human beings: If they break, if they’ve erred, we throw them away.

How did you go about getting the delicate racial aspects right?

Did you set the show there because it’s such fertile soil for looking at these issues?

MOFFAT It was originally Chicago. We moved because Showtime remembered that they have another show set in Chicago. But I’m delighted that we did.

CRANSTON We were able to create a character out of the location of New Orleans, and I think that’s to our advantage. “Breaking Bad” was originally supposed to be in Riverside County, Calif., which is east of Los Angeles and a very challenging place. Our studio said, “We need to move it to Albuquerque because of costs — we get a rebate.” We begrudgingly moved, but we’re so grateful we did.

At the heart of “Your Honor” is a big question: What does it mean to do the right thing?

CRANSTON In everyday life we’re making thousands of decisions, and by and large you hope you’re making the right one. I had a reason to acquaint with Warren Buffett a few years ago, and of course, I’m not going to let Warren Buffett leave my sphere without asking, “OK, Warren, what is the secret to your great success?” And in his humble, Nebraskan way, he said, “Well, just make more right decisions than wrong ones.” [Laughs.] Michael Desiato is not accustomed to purposefully making the wrong decision. It’s the wrong decision for the right reason.

MOFFAT I road-tested that question by asking people to put them in his shoes, if they’re parents, and decide what they would do. And it’s pretty close to 100 percent that says, “You turn around and leave.” I think what’s useful for us, from a dramatic viewpoint, is that everybody can imagine being Michael and doing the same thing.

CRANSTON In the character’s place, there was a heightened sense of reality, with adrenaline pumping, and despair right on the verge of occurring. Hopefully most of us don’t have to live through that much on a daily basis. [Laughs.] And this character actually was having a pretty good day before all of this came crashing down on him. That’s what makes good drama.

Can you imagine doing what Michael does for your own kids?

CRANSTON: Nah, I don’t like my kids that much. Seriously, yes, of course. It is a parent’s No. 1 responsibility to protect your children — and if necessary, sacrifice yourself for them.

Bad Sex in Fiction Award Is Canceled, as 2020 Was Bad Enough