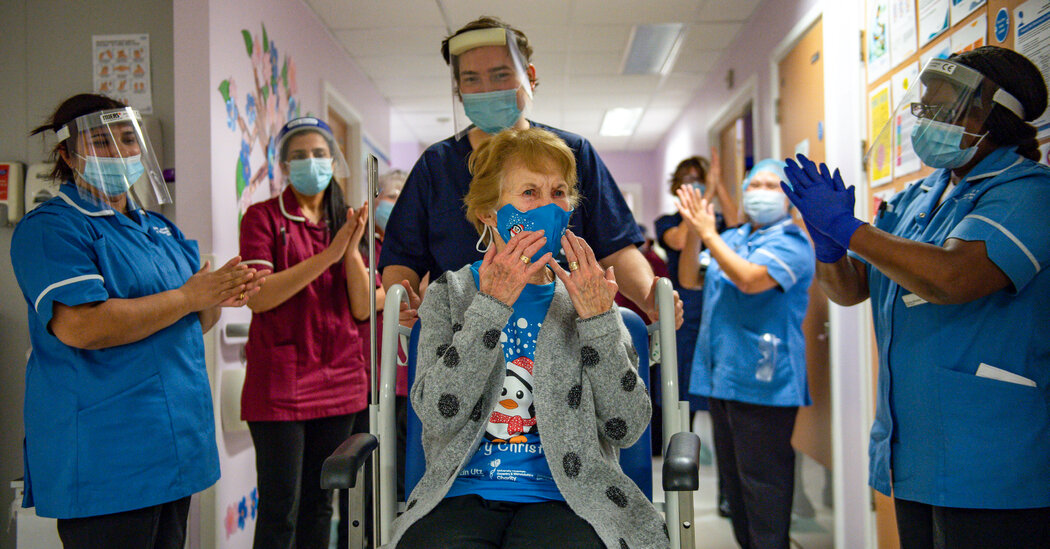 We’re covering the administration of the world’s first vaccines, the vagaries of Brexit trade negotiations and the increasingly not-so-frozen North.

Image Margaret Keenan, 90, became the first person in Britain to receive the Pfizer-BioNTech vaccine on Tuesday.Credit…Pool photo by Jacob King

Those first recipients included older Britons and hundreds of health workers. For them, the shots offered a peek at life after Covid-19, replete with plans for rescheduled wedding anniversaries and bus trips to the seaside.

But any such fantasies were tempered by the bleak winter ahead, with the virus still spreading and claiming, on average, more than 400 lives a day in Britain. A country of 67 million has only enough doses now for 400,000 people. It will be months before shots are given to enough Britons, much less to enough people in poorer countries with scarce access to vaccines, that life can start returning to normal.

Quotable: “I feel so privileged to be the first person vaccinated against Covid-19,” said Margaret Keenan, 90, who got the first shot. “It means I can finally look forward to spending time with my family and friends in the new year after being on my own for most of the year.”

Casting call: William Shakespeare, an 81-year-old Briton from Warwickshire, was one early recipient of the vaccine. His famous name offered a chance for some levity on a momentous — and sometimes daunting — day.

Data analysis: The U.S. Food and Drug Administration found that the Pfizer vaccine offered strong protection against Covid-19 within about 10 days of the first injection.

Prime Minister Boris Johnson backed off his threat to renege on a treaty he signed with the European Union.Credit…Daniel Leal-Olivas/Agence France-Presse — Getty Images

For weeks, Prime Minister Boris Johnson of Britain has played an extreme version of hardball over Brexit, threatening to break international law and renege on a treaty he signed with the European Union if it fails to strike a new trade agreement with him soon.

Mr. Johnson dropped that threat yesterday, raising hopes that a more diplomatic approach could yield a breakthrough in talks planned for Wednesday with Ursula von der Leyen, the president of the European Commission.

In a statement, Britain agreed to remove parts of legislation that would have allowed the government to override aspects of a landmark Brexit withdrawal agreement designed to avoid the creation of a hard border between Northern Ireland, which is part of the United Kingdom, and Ireland, which will remain a member of the European Union.

Analysis: “Boris Johnson has solved a problem he created,” said David Henig, from the European Center for International Political Economy, a research institute. “On balance, it is now more likely that there is a mood to go and strike a trade deal than not, even if it is too early to say that for sure.”

A Russian forestry worker fought a fire near the village of Basly in the Omsk Region of Siberia in August.Credit…Alexey Malgavko/Reuters

This year’s Arctic Report Card, an annual assessment by an international panel of scientists, warned that drastic changes to the Arctic climate are well underway as the region is heating up more than twice as fast as other parts of the planet.

This year, the minimum extent of sea ice in the Arctic Ocean, reached at the end of the melt season in September, was the second-lowest in the satellite record, while permafrost continued to thaw and erode along Arctic coastlines, leaving Indigenous communities struggling to cope with damaged infrastructure.

Dire warnings: “Nearly everything in the Arctic, from ice and snow to human activity, is changing so quickly that there is no reason to think that in 30 years much of anything will be as it is today,” said one of the editors of the assessment.

If you have 12 minutes, this is worth it

President Barack Obama on a visit to Midway Atoll in 2016. Literature is more important than ever, he said recently, adding, “We need to explain to each other who we are and where we’re going.”Credit…A.J. Chavar/The New York Times

Mr. Obama wrote his first draft on yellow legal pads, doing his best work between 10 p.m. and 2 a.m. His writing was the culmination of years of inspiration from literature, he said: “When I think about how I learned to write, who I mimicked, the voice that always comes to mind the most is James Baldwin.”

U.S. election: President Trump’s efforts to overturn the presidential election are nearing the end of the line, with yesterday bringing a “safe harbor” deadline for states to certify their results. The Supreme Court also rejected a Republican request to overturn election results in Pennsylvania that had already been certified and submitted.

Christchurch massacre: An independent inquiry into the attack at two New Zealand mosques in March 2019 has found that there was “no plausible way” the country’s government agencies could have detected the terrorist’s plans “except by chance.”

Snapshot: Above, customers lucky enough to get Christmas trees in Barrie, Ontario, on Saturday. Christmas trees are selling out in Canada, in the U.S. and across Europe as people stuck at home in lockdown — without the family gatherings, parties and group dinners of a typical holiday season — try to shoehorn some joy into their lives.

‘Bad Sex in Fiction’ award: Editors of the Literary Review will not deliver a winner this year, on the grounds that the public has been “subjected to too many bad things this year to justify exposing it to bad sex as well.”

Grubby pandas: In a new paper, researchers in China reveal the results of a decade-long investigation into why giant pandas smear their bodies with mounds and mounds of horse manure. The behavior may help the pandas tolerate cold temperatures, scientists found, because of a compound in horse dung that counteracts pandas’ sensitivity to chills.

What we’re reading: This feature in Outside magazine revealing the identity of the man who found the famed and much sought after Fenn treasure. It’s a wild ride, with one unexpected twist after the next.

Cook: This buttermilk marble cake is tender and moist, and a breeze to put together. And its cream cheese chocolate frosting is a revelation.

Watch: “Another Round,” a sweet, strangely modest Danish tragicomedy about the pleasures of (mostly banal) excess.

Do: Pretend you’re in Dakar. It’s impossible to fully experience the West African city without making the trip, but our travel writers have come up with ways to capture at least a sliver of the magic.

Staying busy and entertained at home is a piece of cake with our At Home collection of ideas on what to read, cook, watch, and do while staying safe indoors.

“It will long be remembered and studied as a time when more than 1.5 million people globally died during a pandemic, racial unrest gripped the world and democracy itself faced extraordinary tests,” he writes, in the introduction to The Times’s annual Year in Pictures feature.

Below is a (very) limited selection of some of these extraordinary photographs. Check out the full array here — and, as you do, ask yourself which images from this deeply unusual year have stuck with you.

Early in the year, the virus hit parts of Western Europe harder than any other place in the world. In March, a coronavirus patient was examined at his home in Cenate Sotto, Italy.Credit…Fabio Bucciarelli for The New York Times Around the world, people spent far more time at home this year than usual. In São Paulo, Brazil, residents of the Copan building gathered at their windows in March to protest the pandemic response of President Jair Bolsonaro.Credit…Victor Moriyama for The New York Times Donald Trump became only the fourth elected president in the last century not to win re-election, joining Herbert Hoover, Jimmy Carter and George H.W. Bush. Trump departed Air Force One in August after returning from a campaign rally.Credit…Doug Mills/The New York Times Joe Biden struggled badly early in the Democratic primaries, only to rally to win the nomination and the presidency. He prayed at the Corinthian Baptist Church in Des Moines in January.Credit…Brittainy Newman/The New York Times Climate change wrought destruction on the planet in multiple ways during 2020. In Azusa, Calif, a wildfire burned more than 4,200 acres in August, during the most active wildfire year on record for the West Coast.Credit…Meeridith Kohut for The New York Times Protesters marched in Manhattan in June as anger spread across the country over the police killing of George Floyd in Minneapolis.Credit…Demetrius Freeman for The New York Times Amid illness, death and separation in 2020, people also experienced great joys — even if they sometimes required adaptation. In April, Precious Anderson, a Covid-19 patient, was shown her newborn baby for the first time with the help of a live video feed at a hospital in Brooklyn.Credit…Victor J. Blue for The New York Times

That’s it for this briefing. Have a wonderful Wednesday.

P.S.
• We’re listening to “The Daily.” Our latest episode is about asylum seekers in limbo in the United States.
• Here’s our Mini Crossword, and a clue: Hangtime, to a skier (three letters). You can find all our puzzles here.
• The word “kremsnita,” a custardy European cake, first appeared in The Times on Tuesday, according to the Twitter account @NYT_first_said.
• Mike Ives, who previously wrote this newsletter, will join the Express desk as a breaking news and general assignment reporter based in Seoul.

This Time, a Cartoon Depiction of Naomi Osaka Is More True to Life

Scientists use fruit peel to turn old batteries into new