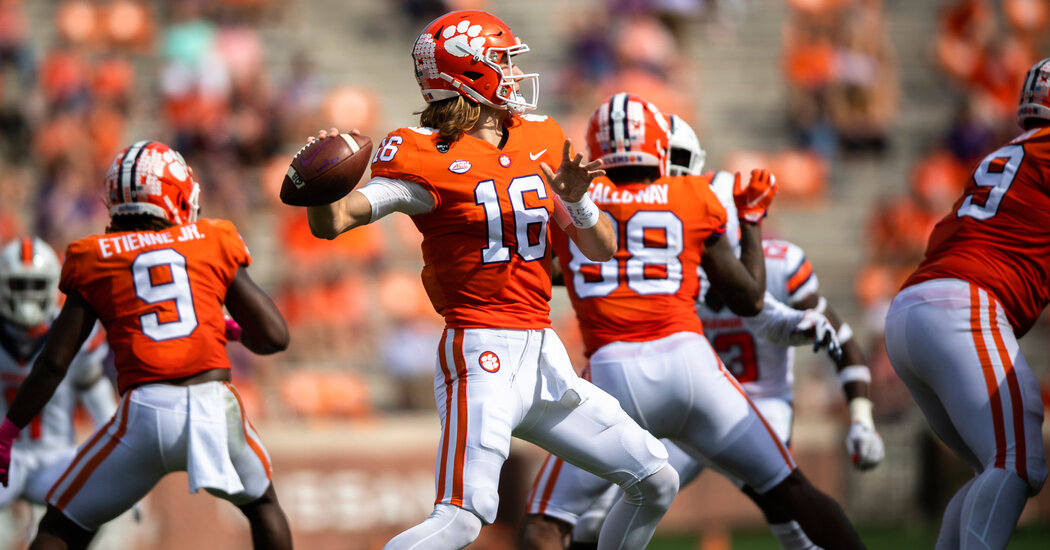 Trevor Lawrence, the star quarterback at top-ranked Clemson and a leading contender for the Heisman Trophy, has tested positive for coronavirus, the university said Thursday night.

Tigers Coach Dabo Swinney said in a statement that Lawrence was “doing well with mild symptoms” but that he would miss Saturday’s game against Boston College.

Perhaps more crucially for the race toward the College Football Playoff, Swinney did not say when Lawrence had tested positive or when he had developed symptoms — distinctions that could determine whether he would be eligible to play at No. 4 Notre Dame on Nov. 7.

In a post on Twitter late Thursday, Lawrence said that his symptoms had been “relatively mild” and that “the only thing that hurts is missing an opportunity to be with my teammates this weekend and play the game I love.”

Lawrence has been among the most electrifying quarterbacks in college football in recent years. He passed for more than 3,600 yards last season, when he steered Clemson back to the national championship game a year after it had won the title.

And just a few months ago, he was a leading figure in the #WeWantToPlay movement that urged college sports executives to mount a football season during the pandemic.

The Lawrence announcement was the latest development in a turbulent college football season marked by conferences’ shifting their decisions about whether to proceed and the postponement or cancellation of more than three dozen games involving Football Bowl Subdivision teams.

On Wednesday, Wisconsin canceled its game at Nebraska after at least 12 people, including six players and Coach Paul Chryst, tested positive for the virus. (The university said Thursday that three more people associated with the football program had since tested positive, and it remained unclear whether the Badgers’ next game, a Nov. 7 matchup with Purdue, would happen.)

This Irish Couple Built Homes for Their Employees, and It’s Changed Their Lives

‘The Mandalorian’ Season 2, Episode 5 Recap: Baby Yoda Has a Name