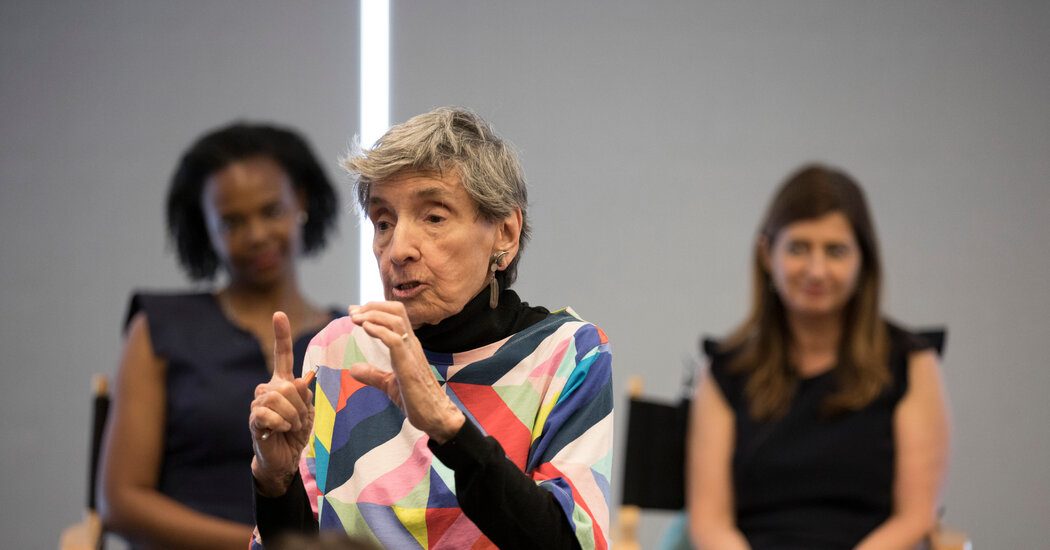 In a 45-year Times career, she also became the first woman to lead the Newspaper Guild of New York and fought a sex discrimination case against the paper.

Betsy Wade in 1975 in The New York Times newsroom. When she landed at The Times in 1956, she broke a 105-year-old practice of male copy editing in the news department.Credit…The New York Times

Betsy Wade, the first woman to edit news copy for The New York Times and the lead plaintiff in a landmark sex discrimination lawsuit against the newspaper on behalf of its female employees, died on Thursday at her home on the Upper West Side of Manhattan. She was 91.

Her death was confirmed by her husband, James Boylan, who said she learned in 2017 that she had colon cancer.

In a 45-year Times career, Ms. Wade also became the first woman to lead the Newspaper Guild of New York, the largest local in the national journalism union (now known as the NewsGuild).

She was revered among peers for her role in the 1974 class-action suit against The Times, one of the industry’s earliest fights over women’s rights to equal treatment in hiring, promotion, pay and workplace protections under federal anti-discrimination laws.

Four years after being fired as a reporter for The New York Herald Tribune for being pregnant, Ms. Wade landed at The Times on Oct. 1, 1956, and instantly broke a 105-year-old practice of male copy editing in the news department, where women were rare, relatively underpaid and confined largely to reporting on fashions, cooking and other subjects considered by male colleagues to be “women’s news,” or to clerical or secretarial jobs.

“The copy desk did not put a screen around me,” Ms. Wade told Nan Robertson for her book “The Girls in the Balcony” (1992), about the rise of women at The Times. “But they took the cuspidors out of the city room the first week. A copy boy got some deep ruffling and put it around my paste pot.” And the men told clean jokes, she said, “to make me feel less like a temperance worker at a brewery picnic.”

Ms. Wade, still a trainee, spent only a month on The Times’s city news copy desk before she, too, was assigned to edit women’s news. She was too good to be sidetracked, however, and by 1958 she was back in general news.

She was soon recognized for her cool appraisals of articles and her deft pencil — invisible to readers, but all too apparent to colleagues — as her surgical excisions and repairs saved The Times from factual errors and its writers from clumsy sentences, phrases of dubious taste and embarrassing flaws in grammar, spelling and syntax.

And her headlines — the icing on the cake for a copy editor — were often extraordinary, like one on April 9, 1962, over twinned stories datelined Moscow and Tokyo, in which she rendered “Spring” in Russian, Japanese and English to universalize celebrations of the vernal equinox.

The slot was often a steppingstone to upper management. But the newspaper’s house organ, Times Talk, proclaimed her promotion with a sexist idiom: “Betsy’s in the slot: first dame to make it.”

A year earlier she had been entrusted to help prepare for publication the Pentagon Papers, classified documents and explanatory articles that told of American duplicity in Vietnam. In a historic ruling for freedom of the press, the U.S. Supreme Court denied a Nixon administration challenge. The Times won a Pulitzer Prize for publishing the papers.

Image Ms. Wade, left, in The Times’s newsroom in 1969. Her deft pencil saved the newspaper from factual errors and its writers from clumsy sentences and embarrassing flaws in grammar, spelling and syntax.Credit…Donald F. Holway/The New York Times

Ms. Wade joined a women’s caucus in 1972 to study gender issues at The Times. It found that weekly salaries for women were $59 less than those of men with comparable jobs; that there were no women in the top corporate or newsroom ranks, on the editorial board or among 22 national correspondents; and that the staffs of 33 foreign correspondents and 35 Washington bureau members included only three women each.

The Times agreed to place more women in jobs ranging from entry level to top management, and to create annuities covering costs of “delayed career advancement or denied opportunity.” But it did not grant raises or admit any violations of law. James C. Goodale, The Times’s executive vice president at the time, called the paper’s voluntary affirmative action program “one of the strongest in the country.”

Ms. Wade countered: “If Judge Werker is now able to say that The Times has progressed in affirmative action, it is our suit that compelled this. The paper began to move toward our goals when the suit went to court, and the women who have been hired since are aware of this.”

Elizabeth Wade was born in Manhattan on July 18, 1929, to Sidney and Elizabeth (Manning) Wade. Her father was an executive with Union Carbide. Seeking better schools for Betsy and her younger sister, the family moved to suburban Bronxville, N.Y., in 1934.

Envisioning a journalism career, Betsy worked for student newspapers at Bronxville High School, from which she graduated in 1947, and Carleton College in Northfield, Minn. She transferred to Barnard College in Manhattan in 1949, earning a bachelor’s degree in 1951. A year later, she received a master’s degree from the Graduate School of Journalism at Columbia University.

She married Mr. Boylan in 1952; he founded The Columbia Journalism Review in 1961. They had two sons, Richard and Benjamin. They survive her, along with six grandchildren and three great-grandchildren.

Ms. Wade began her journalism career on The Herald Tribune’s women’s page. After her dismissal, she wrote for the Newspaper Enterprise Association from 1954 to 1956, when she joined The Times. In 1978, she was elected to a four-year term as president of the New York Newspaper Guild.

In 1987, after three decades as a copy editor, she took over The Times’s Practical Traveler column, and for 14 years, until her retirement in 2001, wrote weekly tips-for-travelers articles. A collection of her columns, “The New York Times Practical Traveler Handbook,” was published in 1994.

Ms. Wade in 2018 speaking to the Women’s Network, an employee group at The Times. Though she retired in 2001 she remained active as a teacher of journalism and public policy.Credit…James Estrin/The New York Times

In retirement, Ms. Wade taught journalism and public policy at Hunter College in Manhattan. In 2016, she received the highest accolade for New York’s veteran journalists, the lifetime achievement award of the Silurians Press Club.

Ms. Wade was also a board member of the Anne O’Hare McCormick Memorial Fund, which endows scholarships for women at the Columbia and CUNY journalism schools.

Since the 19th century, Times articles had identified men in secondary references as “Mr.” and women as “Mrs.” or “Miss.” Stuck with the double standard, reporters asking female interviewees if they were married or single were often told to get lost.

But on June 20, 1986, The Times began using “Ms.” The change first appeared in a Page 1 article about a Supreme Court ruling on the sexual harassment of a bank employee by a male supervisor. The article called the victim “Ms. Vinson.”

It was edited by Betsy Wade.

$3 trillion: Global spend on health care due to air pollution