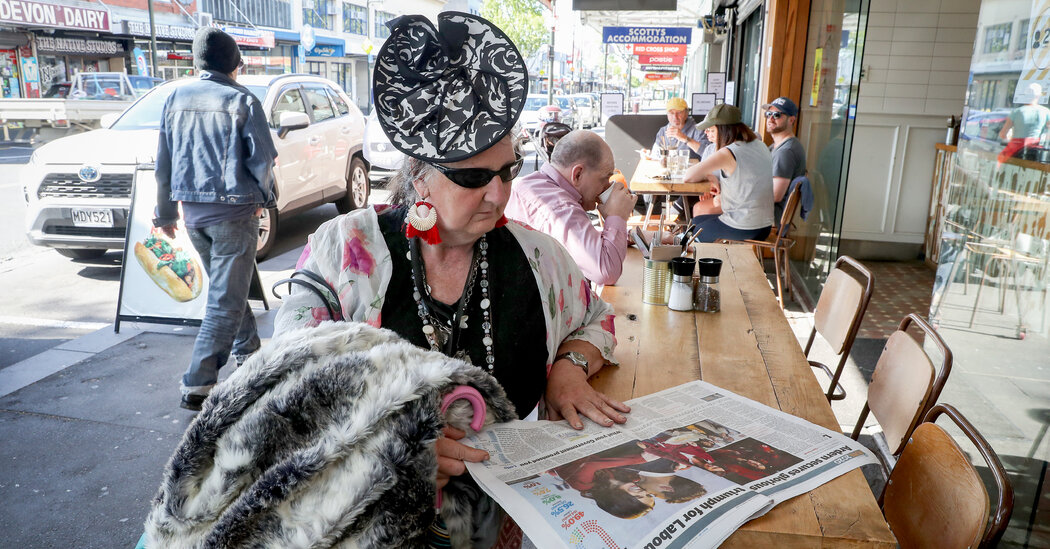 What it feels like to leave New York and land in a parallel universe of calm politics and good health.

The Australia Letter is a weekly newsletter from our Australia bureau. Sign up to get it by email.

Roughly three weeks ago, I stepped off a plane and into a parallel universe. Here in New Zealand, coronavirus lurks far from the limelight, the recent election was orderly and uncontroversial, and the national mood — for the most part — approximates relief and even elation.

Helped along by geographic isolation, an early lockdown and the public’s overwhelming compliance with government-mandated restrictions, the country where I grew up is among just a handful of nations to have eliminated community transmission of the coronavirus.

In Auckland, where I attended high school, groups of friends share plates of cassava fries, punters spill out of bars on lively Karangahape Road and strangers sit side-by-side on the bus. After spending most of this year in New York City, it’s all I can do not to jump when someone coughs under their breath or stands a little too close.

On Saturday night, I joined around 500 others at The Hollywood, a converted early 20th-century cinema in west Auckland, to see the New Zealand musician Troy Kingi and his band.

Held less than a month after the city relaxed its final virus restrictions, it was sweaty, euphoric and jam-packed — an epidemiologist’s worst nightmare, anywhere else in the world. Barring around a dozen committed mask-wearers and a strongly worded aside from the singer himself about what Covid could go and do, you might never have known that a global pandemic continues to rage on outside New Zealand’s walled garden.

The effect is, or may be, something like a sneak preview of a post-virus world. While political leaders in the United States and Europe continue to manage rising case numbers, lurching in and out of lockdown, Jacinda Ardern, the country’s recently re-elected prime minister, is focused on managing a successful recovery.

Kiwis are prepared to play their own part: They’ve taken the instruction to go on vacation “in your own backyard” seriously. Tourist accommodation is booked out months in advance and vacation destinations like Queenstown are thronged with Aucklanders and Wellingtonians.

Already, the economy has begun to bounce back. Shamubeel Eaqub, an Auckland-based economist with Sense Partners, told me the country’s worst recession in decades is essentially over.

“Spending is up, job advertisements are up well above Covid levels,” he told me. “We’re out of it.”

That said, there are few illusions about the precariousness of this newfound freedom.

Dr. Ashley Bloomfield, the country’s unflappable Director-General of Health, gives near-daily televised updates on the number of coronavirus cases in quarantine caught at the border. Bottles of hand sanitizer still proliferate in public places. And customers in ride-hail cars, bars and cafes are expected to scan location-specific QR codes on entry to help with contact tracing in the event of another outbreak.

The country breathed a sigh of relief after a recent cluster of three cases, caught at the port, was apparently quashed within days.

Mingled with all this joy is a looming question that no one really knows the answer to. To keep the virus out, New Zealand has adopted a highly isolationist approach, involving the resolute closure of borders. Only New Zealanders, their families, and a small selection of critical workers can enter — placing stress on universities, which rely on international students, and sectors such as international tourism.

“If there’s no vaccine, or if the vaccine’s imperfect, do we open up?” said Ben Thomas, the New Zealand political commentator. “Do you kind of keep this pristine Middle-earth barricaded off from the plague-ridden world forever? Jacinda Ardern has said we can’t live with the virus, but what is the alternative to that? That will be the big question.”

But at the end of a long weekend and about a month into an unseasonably warm spring, such concerns are far from most New Zealanders’ minds. Lockdown is a distant memory, coronavirus restrictions something that now — hopefully — happen elsewhere.

With the nearest major land mass a three-hour flight away, life in New Zealand often seems quite remote even under normal circumstances. Right now, it’s like another planet.

Now for our stories of the week:

Image A cafe in Melbourne on Wednesday.Credit…Darrian Traynor/Getty Images President Trump during a campaign rally in Omaha on Tuesday. He has held multiple rallies each day in different states.Credit…Doug Mills/The New York Times

Enjoying the Australia Letter? Sign up here or forward to a friend.

For more Australia coverage and discussion, start your day with your local Morning Briefing and join us in our Facebook group.