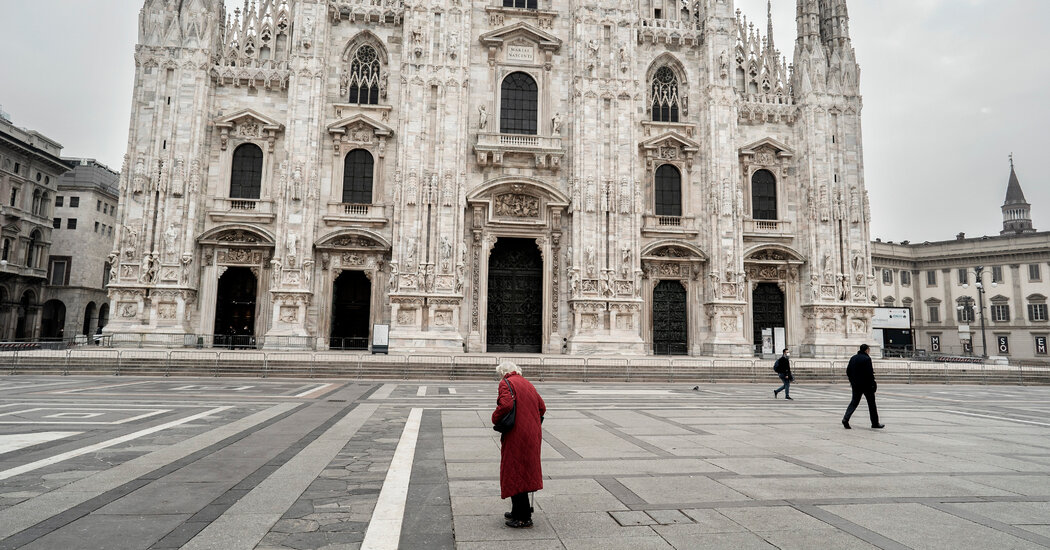 Around the world, flouting coronavirus regulations can have expensive consequences.

The piazza Duomo in Milan, Italy, in early November.Credit…Alessandro Grassani for The New York Times

One man left the house after an argument with his wife and walked 280 miles to cool off, breaching Italy’s national curfew.

Another man wandered outside his quarantine room in Taiwan for eight seconds and caught the attention of the authorities.

Still another drove 19 miles for a butter chicken curry during a strict lockdown and was apprehended by the Australian police.

All those actions ended up costing them thousands of dollars in penalties.

During the global pandemic, with entire cities locked down, travel heavily restricted and isolation fatigue setting in, thousands of people have been caught, fined or jailed for breaching coronavirus restrictions that have made once normal activities taboo.

Some have intentionally broken the rules to make a political statement. Others have claimed they are immune to the disease and from the consequences of breaking those restrictions. Others have simply blundered into breaches because they apparently didn’t understand the rules or were acting in a moment of desperation.

“Everyone is operating in a crazy world where our normal rational decision making goes out the window,” said Robert Hoffmann, a professor of economics at RMIT University in Melbourne, Australia. “A pandemic is a perfect storm.”

Here are a few unusual cases.

Image A department store in Taipei, Taiwan, in November. Taiwan has been lauded for its successful response to the coronavirus.Credit…Chiang Ying-Ying/Associated Press

In the port city of Kaohsiung, in the south of Taiwan, a migrant worker from the Philippines was caught on surveillance cameras briefly stepping into the corridor of a hotel while he was under quarantine in November.

The unidentified man wanted to leave something outside the door of a friend, who was quarantining at the same hotel, according to the Central News Agency, the official Taiwanese news agency, citing the health department.

In a video clip that circulated online, the man, wearing shorts and flip-flops, could be seen taking six lumbering strides between his room and that of his neighbor, before turning around.

His behavior, economists say, shows a kind of “optimism bias” — human beings tend to underestimate their chances of getting into trouble.

Taiwan has been lauded for its successful response to the coronavirus, an effort led by Chen Chien-jen, an epidemiologist who until May was vice president. But in recent weeks, the island has had a surge in cases, largely imported from Indonesia, prompting it to temporarily bar some migrant workers from entering and crack down on those in quarantine.

While punitive measures like fines act as deterrents, there is a limit to their effectiveness, economists say. Winning cooperation, they added, is a far better defense.

Nurses helping patients with Covid-19 in a hospital in Bergamo, Italy, in November. Italy is fighting a second outbreak of the virus.Credit…Fabio Bucciarelli for The New York Times

After a heated argument with his wife, a man in Como, in Italy’s north, stepped outside his house for some air in November. The authorities found him a week later — after he had walked 280 miles south to the coastal town of Fano, breaching a national curfew.

The unidentified man, 48, had walked about 40 miles per day, according to local news reports. The police confirmed his story after contacting the authorities in Como, where the man’s wife had reported him missing. He told the authorities that he was feeling a little weary, but had been given food and water by strangers along the way.

Italians on social media dubbed the man “Forrest Gump,” after the Tom Hanks character in the 1994 film who runs thousands of miles to clear his head.

Some said he deserved the fine, while others expressed relief that the argument ended at that. (Domestic violence rates around the world have soared during the pandemic, studies show.)

Italy, which captured the world’s attention in March when the coronavirus hit, is fighting a second wave that is almost as deadly. The country is also battling a sense of exhaustion and despair.

“People are taking desperate measures; they are overreacting to the stimulus,” said Jelena Kecmanovic, an adjunct professor of psychology at Georgetown University.

Referring to the man in Como, she added that normally, someone might walk around the neighborhood to cool off. “But now it’s accumulated, accumulated, and he snapped,” she said.

After Prince Joachim of Belgium landed in Spain in late May, he was supposed to quarantine for 14 days and adhere to the country’s lockdown measures.

The prince, 28, the nephew of King Philippe, instead flew from Madrid to Córdoba to meet his girlfriend. A few days later, the couple went to a house party with more than two dozen people in attendance, local news media reported.

Then he tested positive for the coronavirus.

Spain, which had one of Europe’s strictest lockdowns, has fined more than one million people for flouting those measures. It did not let the Belgian prince off the hook, handing him a €10,400 fine (about $12,630) for breaching the restrictions.

“I would like to apologize for not having respected all the quarantine measures during my trip,” he said in a statement released publicly. “In these difficult moments, I did not mean to offend or disrespect anybody.”

Other public figures, including the singer Rita Ora, the rapper Cardi B, the reality TV star Kim Kardashian and the model Kendall Jenner, have drawn criticism for ill-conceived public forays during the pandemic, such as hosting large, mask-less gatherings.

“It’s quite hard to live life that different from the rest of the public and not to start to feel like the rules don’t apply to you,” said Dr. Kecmanovic, the psychology professor. But, she added, celebrities could use their power to encourage people to cooperate with the restrictions: “They really have power.”

Melbourne, Australia, had one of the world’s longest and strictest lockdowns.Credit…Asanka Brendon Ratnayake for The New York Times

In Melbourne, Australia — amid one of the longest and strictest lockdowns in the world — Noel Atkinson, a 48-year-old construction worker, had a yearning in July.

So he drove nearly 20 miles from his home to a downtown Indian restaurant for butter chicken curry. But he did not get the butter chicken. Instead, he got a police fine of $1,230, after they caught him contravening lockdown orders.

“I just had a craving for it,” Mr. Atkinson said in an interview. “My mum was born in Ambala,” he added of the city in the north of India. “It reminds me of home.”

As an essential worker, Mr. Atkinson had been exempt from most coronavirus restrictions during the day in the state of Victoria. He explained that since he traveled more than twice the distance for work, he had not considered the drive to the city lengthy or realized that he would be in breach of the rules.

“I have to risk my life to go to work, but I can’t risk my own life to get takeaway,” he said. “That’s a bit unfair.”

Before he was identified publicly, Australians tried to hunt down his identity. One restaurant offered to reimburse him for his trouble in curries.

Amit Tuteja, the owner of Desi Dhaba, the restaurant where Mr. Atkinson had planned to order his curry, said that while he did not condone Mr. Atkinson’s actions, “he made a mistake, but I’m pretty sure he just did not know.”

“He’s not the type who’s a freeloader; he’s a hard worker,” he added. “I said to him, ‘Mate, for the next year, you can have as much butter chicken to your heart’s content.’”

‘Mom, It’s Me!’ Woman Meets Son She Placed For Adoption 45 Years Ago And Confirms She Made Right Decision