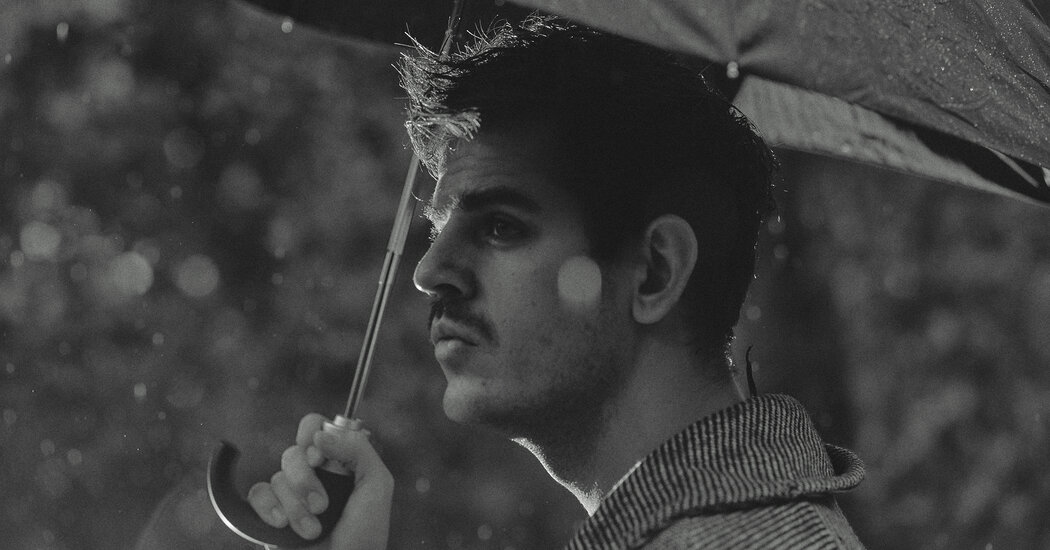 Taco Hemingway became one of his country’s biggest rappers with tracks about partying. This summer, his focus changed and so did the kind of attention he got.

“I got myself tangled up in politics,” said Filip Szczesniak, who records as Taco Hemingway. “That was just not pleasant.”Credit…Tom Jamieson for The New York Times

LONDON — Taco Hemingway is a household name in Poland. One of the country’s biggest rappers, he has songs that get millions of views, and before the coronavirus hit, he filled arenas with bouncing fans, extravagant light displays dancing around him onstage.

But last Friday, his demeanor was a far cry from the bravado typical of a hugely successful rapper. Sitting outside a cheap cafe in West London, Hemingway, whose real name is Filip Szczesniak, seemed nervous and avoided eye contact.

“I’ve always been an extremely anxious person,” he said, by way of explanation. He rarely posts on social media or gives interviews, afraid his every word will be dissected by the Polish media and fans. This is his first for a printed newspaper or magazine since 2015, and his first in English. He only agreed to it, he said, because his parents “wouldn’t forgive me if I said no” to The New York Times.

There were other reasons for Szczesniak’s anxiety to be flaring up. Over the summer, he released a track, “Polskie Tango” (“Polish Tango”), which many saw as a direct criticism of Poland’s right-wing government and the culture of fear it’s often seen to have created in the country through its attacks on gay and women’s rights.

“Our national colors are just like Santa Claus,” he rapped in the chorus, referring to the country’s red and white flag, “which makes sense since I stopped believing in Poland a long time ago.”

He soon found himself under attack on social media and becoming a target for conservative journalists, he said. “I got myself tangled up in politics,” Szczesniak added. “That was just not pleasant.”

This interview was only likely to reignite that and cause him to be labeled “anti-Polish and a tattletale,” he added. He didn’t sound like he was looking forward to it. He also knew just how tense feelings are in Poland at the moment. The day before the interview, a court ruling had severely restricted abortion rights in the country and people were already on the streets protesting.

When asked about this, Szczesniak got visibly upset. “It’s awful,” he said. “It’s another step in the wrong direction for Poland.”

“I don’t think it’s unpatriotic to raise concerns,” he said, later. “It’s patriotic to point out all the wrongdoings of the ruling party, and to hope for a better future. It’s actually unpatriotic to just accept everything and take a beating.”

It took Szczesniak, 30, a long time to get tangled up in politics. He started rapping at age 17, recording some songs in his mom’s basement in English. No one listened to them, he said, with a laugh. For the next eight years, he rapped in his spare time, while taking an anthropology degree and working as a copywriter.

In 2015, he started gaining recognition in Poland after the release of an album in Polish called “Warsaw Triangle,” about three lovers unhappily chasing each other around the Polish capital. It became a sleeper hit, and soon Szczesniak was releasing an album every summer, happily jumping between styles from trap to dance beats to dreamy Drake-like numbers.

But recently, Szczesniak said, he started feeling stuck in a rut. “I was either making albums about partying, or I was making them about how fed up I was with partying and wanted my old life back,” he said. “I thought, ‘I probably should switch it up.’”

In January, he decided, for the first time, “to write an album that’s about Poland,” he said. The decision was partly because of Poland’s worsening political and social situation, he said. The country has for years been in the grip of a culture war, with liberals on one side and the governing populist Law and Justice Party, and its conservative supporters, on the other.

“Polish Tango,” Szczesniak’s first single from that album, made his new musical direction clear. Its impact came partly from timing, he said: It was released two days before Poland’s presidential election in July. The song does not actually mention the Law and Justice party but its video had a clear reference. At the end eight stars appeared, an internet meme meant to be a censored version of a sexual expletive and then the governing party’s initials.

“I just wanted to vent for a second. And I wanted my friends to vent as well,” Szczesniak said.

The song got over five million views on YouTube in its first weekend. “It was quite a shock because it was Taco,” said Cyryl Rozwadowski, a music journalist for the Poptown.Eu website, in a telephone interview. “His music had been becoming more and more egocentric, and just marketed to young girls.”

Initial praise was soon followed by criticism on social media and in Poland’s conservative press. “Taco, you freak!” read a headline for an article on Niezalezna, a conservative news site, accusing the rapper of “boorish mocking of national symbols.”

Szczesniak said he got threats via social media because of the track and found himself embroiled in numerous conspiracy theories. Many claimed his girlfriend’s father, a journalist and famous critic of the government, was behind the song. “The backlash was too big — I couldn’t ignore it even if I tried,” Szczesniak said.

“Polish Tango” was followed by a double album, the first half of which (“Jarmark”) is political, with the second half (“Europa”) arriving a week later, and designed to be all fun. Together, the albums spell the name of a former market in Warsaw. The narrative heart of “Jarmark” is three songs called “The Chain,” which describe anger passing from person to person in a Polish city, from a newspaper seller to a student to an immigrant Uber driver to a businessman, in a never-ending cycle.

Many fans had expected the album’s political side to be one long attack on Poland’s government, said Rozwadowski, and for them, the result was disappointing. There were songs that criticized the government and the church, he said, but it avoided topics like the Polish government’s use of homophobic rhetoric.

The album is filled with “bitter pills to swallow, both for those who think everything is fine in Poland today and those who are inclined to blame the government for all failures,” wrote Jarek Szubrycht in a review for Wyborcza, Poland’s main liberal newspaper.

There were rumors in Poland’s music industry that Szczesniak had toned down the album’s content because of the backlash to “Polskie Tango,” Rozwadowski said. Sitting in the cafe after it started to rain, Szczesniak admitted he’d changed two lines to remove the names of politicians because he didn’t want the album to be dismissed as partisan or to undermine its wider messages about issues throughout Polish society.

Despite his anxiety, Szczesniak was direct about his political opinions during the interview. But he still seemed torn between expressing his views and risking being misunderstood and avoiding more trouble altogether. He was unlikely to make another political record, he said. But then moments later he seemed to change his mind. “I’m still very exhausted by ‘Polskie Tango,’” he said. “I might be in the phase of a hung over person saying, ‘Never again.’ I might go back to it.”

Three days after the interview, on Monday, Szczesniak seemed to be closer to a decision on what his political engagement would look like from now on. He made a rare post to his Instagram Stories about the protests around the new abortion law in Poland, which had become increasingly tense with governing-party politicians calling the tens of thousands of protesters “criminals.”

“I am so proud of what’s happening in Poland,” Szczesniak wrote. “Keep eyes in the back of your head, scream, march, sing, chant — remind the government that we are watching them,” he added.

He signed it Filip, rather than Taco Hemingway, and he seemed to have again decided it was worth sticking his head above the cultural parapet — although this time, his message automatically disappeared after 24 hours.