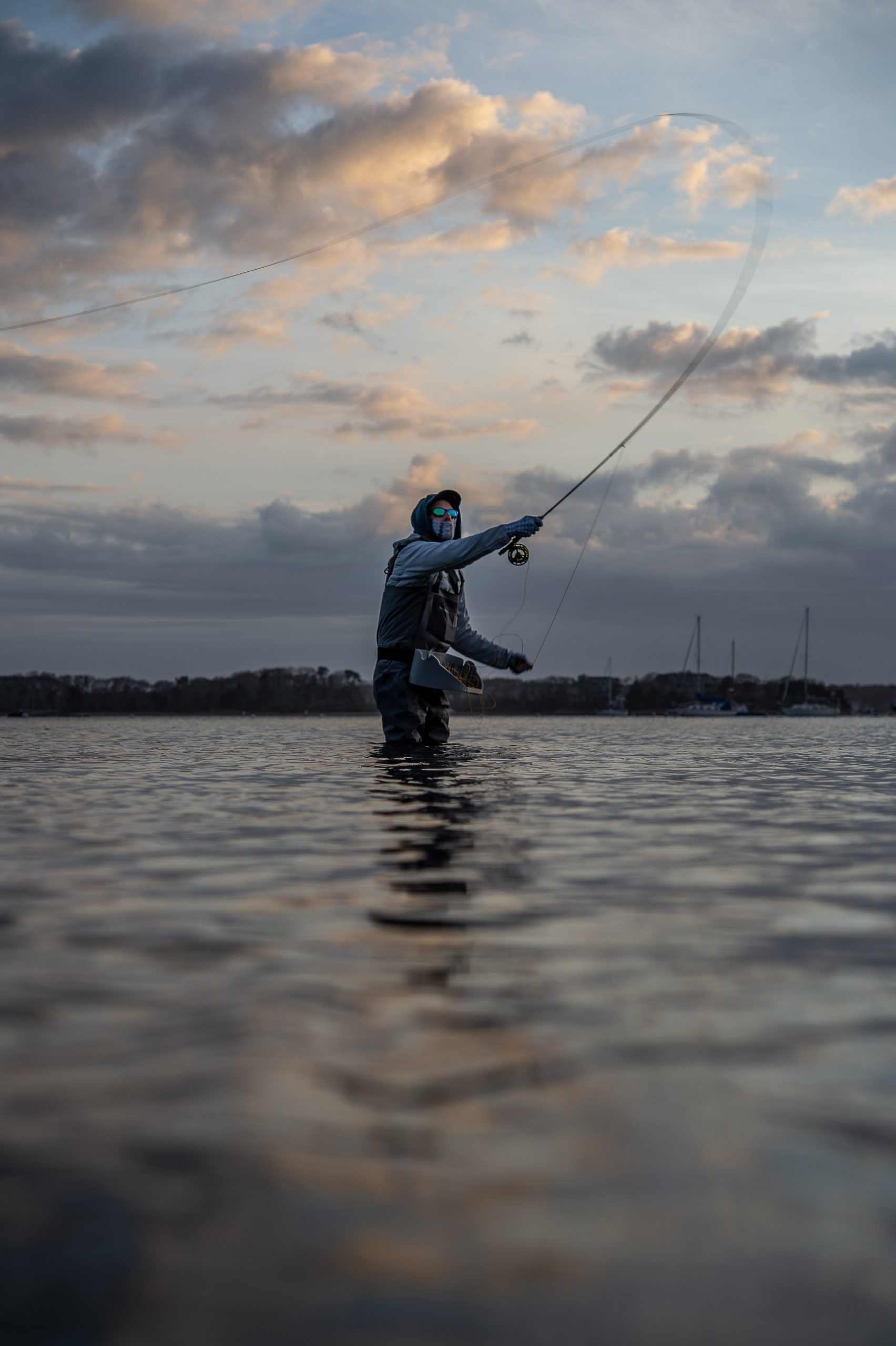 Kevin Blinkoff searching for stripers with a fly-fishing rod in early May.

One of the best at the game of striper surf fly-fishing is Bob Popovics. He’s been at it since the late 1960s and lives only minutes from New Jersey’s Island Beach State Park. Surrounded by good buddies and good surf-fishing opportunities so close to home, his experiences also include days spent at remarkable surf fly-fishing haunts in New England, Montauk, and the Outer Banks. Bob is known as much for his fly-tying and fishing skills as he is for his patience teaching everyone who will listen to his tips and strategies.

Many coastal fly-rodders consider surf fishing to be the ultimate challenge. Pumping on a Guatemala sailfish, throwing a fly to a humongous tarpon, or wading a pretty grass flat for a bonefish are all high on the totem pole, but they require a fat wallet and many hours of travel. Not surf fishing. We all live within a coffee-mug drive from some of the greatest fly-fishing to be found in the world and the chance to catch one of the greatest gamefish, the striped bass.

Ed Giordano hooked up with a striper while fly fishing the beaches of Cape Cod.

“Surf fly-fishing is a very visual experience,” says Bob, “and to be good at it, you have to be an observer, be aware of your surroundings, the type of beach, the breeze, the currents, and beach structure. Watch everything that happens all around you. Before you make the first cast for stripers, walk up to the beach, wait a few moments, and observe. Watch the wave sets, get the feel of the rhythm of things before you start fishing. Prior to my first cast, I check out the water for signs of bait, cloudy and clear water edges, the formation of bars and points, the location of white water and calm water, and the types of birds in the area. You need patience and be an observer,” he advises, “but it makes you a better fly-fisherman.”

Bob likes to keep things uncomplicated. He may have enough gear and equipment in his beach buggy to stock a tackle shop, but he keeps only the bare essentials in a shirt or jacket pocket when he’s standing at the water’s edge. “I always have my stripping basket, and like to use a Velcro belt, which is so much easier to get on and off than a buckle-type belt. My pliers are on my wading belt, and I pare down what I need to just a few flies and essentials. Instead of taking 20 of each type of pattern, such as crab flies, Bucktail Deceivers, or Jiggies, I take maybe three of each so I have enough on hand to replace a broken-off or fish-chewed fly. I like soft fleece wallets that fit into my shirt pockets to keep a supply of favorite flies close at hand.”

He also keeps a spool of 16-pound tippet handy, and another of 12-pound for really clear water. He usually doesn’t use a heavy mono bite tippet. If blues show up, he has a screw-top tube container in his pocket (like the kind that hold cigars) with 8-inch wire leaders pre-tied using a haywire loop at one end to attach to the tippet. The open end is then haywired to the fly.

Bob favors a 9-foot rod, and although some surf fly-casters will go longer with a 9½- to 11½-foot rod, he says, “Although I’ve tried it, I haven’t gotten into the two-hand casting style, and use single-hand rods most of the time. I prefer a rod that is not an ultra-fast design.”

“In my consulting work with Temple Fork Fly Rods, I’ve come to like the Flip Pallot Mangrove Series and the Bob Clouser rods, which have a tad more bend in the butt section as compared to a stiff, ultra-fast taper fly rod. The Mangrove and Clouser rods give the surf fly-caster better control of the presentation when mending the line or lifting it to make a quick cast to reposition the fly. This is an essential feature for any good surf fly rod.”

“A floating line is my first choice when selecting a fly line. I like the RIO Outbound and Outbound Short lines; the standard Outbound for distance casting, the OBS for short, in-close casting. Most fly-anglers can dependably cast 50-to-70 feet – at that distance, most beaches will be about 5-to-7 feet deep. A striped bass can easily see the fly at that depth and if you need to go deeper, a weighted fly like a Jiggy or a Clouser Minnow will get there,” advises Bob.

A floater with a short intermediate head is his second choice. “You want to be able to pick up line and re-cast, if necessary, and this is still possible with an intermediate sink-tip fly line. You need to do this if the fish moves away from you after you’ve made a cast, or if the fish veers off at an angle from its original swimming direction.” 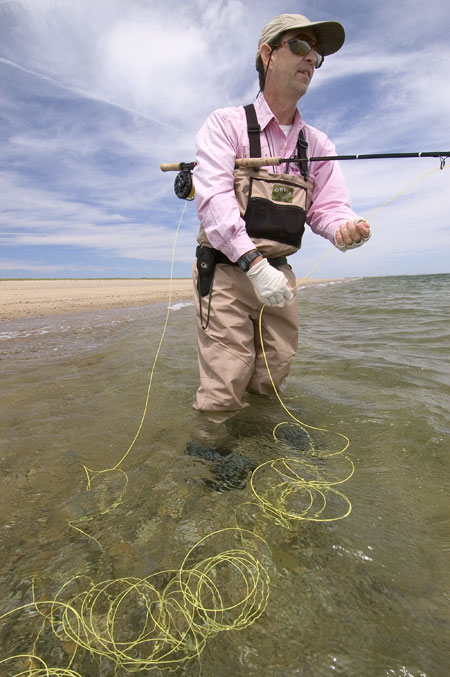 “A floating line behaves badly and makes a poor presentation in the surf only when you allow it to be carried away by a breaking wave. You can overcome this by working the line in between the waves, letting it ride and fall as the waves roll to the beach. Watch the sets. After six or seven waves, there’s usually a calm area before the next set starts. You can make a nice presentation into this calm water.”

Bob recommends learning line-mending skills. This quick, circular flip motion of the rod tip will adjust the line’s position in a current or wave to keep the fly tracking nicely. If the wave action makes it impossible to control the fly, he uses a roll-cast, then lifts for a back-cast and shoots a forward cast to reposition the fly in calm water. Bob says, “Rod handling becomes second nature; after a while, you don’t even think about it. The line mending and lifting just become automatic responses to the motions and actions of the waves.”

We all dream of catching a fish so big we won’t have to fib about it, but typical surf-caught striped bass run from schoolies to teen size and perhaps into the 20-pound range. A 30-pounder is an astonishing catch. Even the biggest striped bass will not take too much line, so Bob prefers lightweight large-arbor reels that can hold about 150 yards of backing. “You don’t need a huge reel. The weight of a big reel gets tiring and feels like you have an anchor under the rod. More important is a large spool diameter that retrieves line quickly. Keep in mind that I can play most fish by simply bringing the line in by hand and dropping it into the stripping basket.”

“Most reels today are saltwater worthy,” he says, “and it’s probably more important to consider which hand you use to crank in the line. Right or left, the dominant hand is your best choice. A right-hander will reel faster, longer, and more smoothly with the right hand; the opposite is true for a southpaw.”

It’s natural to want to walk into the surf up to your knees, but Popovics prefers being higher on the sand because the bass will often be right in the wash. When fly-fishing a beach, the currents and structure are important. The basic current is from the incoming and receding waves, but there are also beach currents generated by wind that can run along the beach. These areas can all be worked by letting the fly swing in the current, mending the line as needed to keep in touch with the fly and not let the waves pull line, causing an erratic retrieve and slack line.

Pictured above, Bob Popovics says to be aware of the current, breeze, and beach structure while fly-casting.

Bob suggests surgically casting along the beach structure just like a trout angler in a small stream. The bass aren’t everywhere; they hold and travel along definite structure such as a slough between the beach and a sand bar, a cut in a sand bar, a point of the beach with white water along its sides, the edges of clear and cloudy water, and also the calm water. “Work all of it,” he says. “Use wind and currents to your advantage when walking the beach. Keep the wind off your non-casting side, when possible, or walk with the current a few steps in between casts.”

Bob’s good friend, Lou Tabory, once told him, “There’s no substitute for time on the water,” and Bob echoes that with more good advice. “Even a fishless morning can still be a great day because of the experience earned and knowledge gained. Count the hours, not the fish. Be an observer, look for things, think about what’s going on around you, work the structure and remember that time on the water builds casting and fishing skills.”

As the premier fall surf fly-fishing quickly approaches, Bob uses specific fly patterns based on what bait is prevalent as the season matures from September through November. For the early fall, he’s usually throwing Siliclones and Bob’s Bangers to imitate mullet, and Jiggies and Surf Candies to imitate rainbait. When bigger baits are in the surf, his go-to patterns include Bucktail Deceivers, The Beasts and Spread Fleyes. Later in the fall when the sand eel invasion has hordes of the slender baits invading the beach, he’ll switch to longer (but skinny) Jiggy Fleyes. 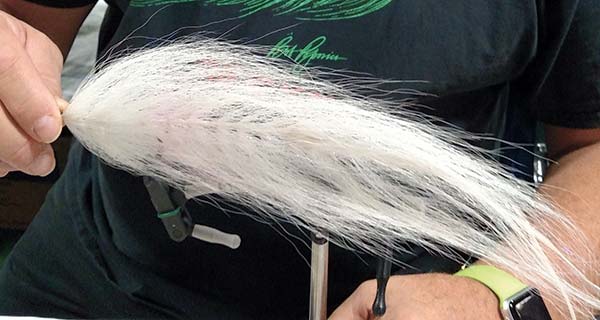 “Most of the time, I know what to expect when I hit the beach, so if the mullet are running, I take mullet patterns and don’t bother loading myself down with a bunch of flies that probably are not appropriate. I do like to have a color selection on hand in case I need to change from a bright fly to a dark one, and same goes for short and long patterns.”

Tip: One of Bob’s favorite fall times to fly-fish is the start of a fresh Nor’easter when it’s still clear, before the water gets all roiled up and murky. “The bass go on a binge feed,” he says, “and if the water is really rough, I’ll use a 300-to-400-grain sink tip line to cut through the turbulence.“

The Atlantic Saltwater Fly Rodders meet on the second Tuesday every month. Bob is usually on hand and ready to talk fly-fishing with members and guests. Stackpole Books has published his two must-read fly-tying books, Pop Fleyes with Ed Jaworowski’s photos, and Fleye Design with Jay Nichol’s photos. Both are exceptional books for every fly-angler.

[Article: 40-Pound Stripers on the Fly]

What Everybody Should Know About Striper Meat

If You Could Only Use 1 Freshwater Lure