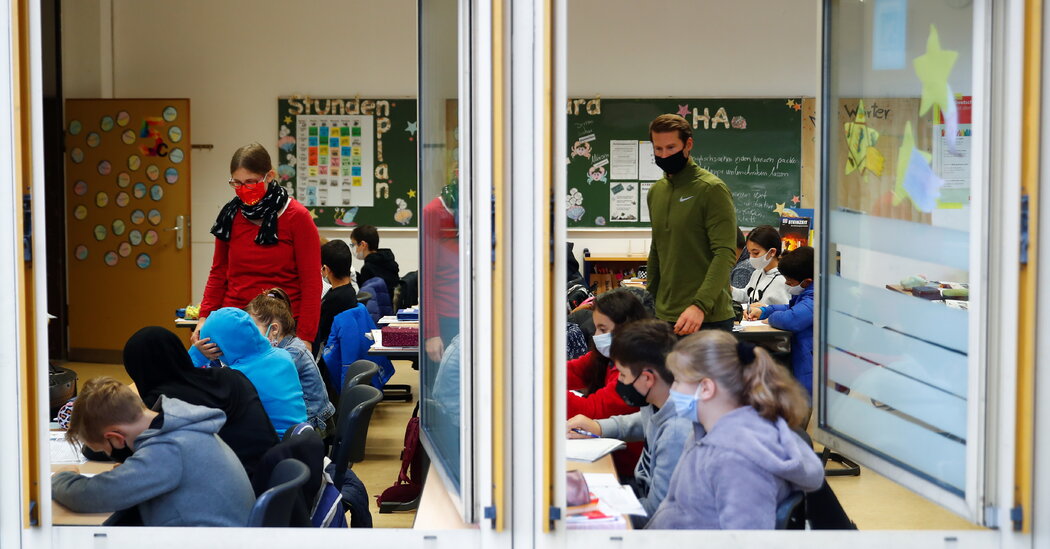 Europe’s latest wave of restrictions to stop the spread of coronavirus have largely avoided closing schools. We take a look at why and how they are being kept open.

Returning to secondary school after the autumn holidays in Bonn, Germany, earlier this week.Credit…Wolfgang Rattay/Reuters

BERLIN — When Chancellor Angela Merkel announced the latest round of restrictions on public life, she named bars, restaurants, theaters, concert halls, gyms and tattoo parlors as institutions that would be forced to close. But missing from the list released on Wednesday were schools and day care centers — among the first to be shuttered in the spring lockdown.

In France, President Emmanuel Macron also said on Wednesday that schools would be exempt from wide-reaching nationwide restrictions that are to take effect beginning Friday. Ireland also allowed schools to remain open despite a nationwide lockdown that went into effect earlier this month.

Not everyone is happy with the decisions, but policymakers are taking extra precautions to reduce the risk in schools, from mask requirements for teachers and pupils, to regular airing of classrooms, to split use of schoolyards during breaks. They say they are applying hard-learned lessons from months of fighting the pandemic, and are prepared to change directions if things take a turn for the worse.

Micheal Martin, the Irish prime minister, said that while his country could no longer avoid restrictions, despite the detrimental impact on the economy, it was vital that schools remained open.

“We cannot and will not allow our children and young people’s futures to be another victim of this disease,” Mr. Martin said in a national address. “They need their education.”

Around the world, there is mounting concern that the pandemic is doing lasting harm to the academic and emotional development of an entire generation of children.

Earlier this month, the German conference of ministers of culture, who are responsible for coordinating education policy, stressed children’s right to an education, which they said is best served among peers, in classrooms. “This must take highest priority in making all decisions about restrictive measures that need to be taken,” the minister said.

In making her announcement, Ms. Merkel cited another reason that maintaining access to schools was important, pointing to the “dramatic social consequences” that closing schools and day care centers had on families during the lockdown in March and April.

“To name it clearly: Violent assaults against women and children increased dramatically,” Ms. Merkel said, justifying her government’s decision to halt sports, cultural events and close restaurants instead. “It is important to bear in mind the social consequences if we have to intervene in these issues.”

Keeping children at home often made it hard for parents — especially mothers — to devote their divided attention to work.

Medical experts point to many things they now know that were unknown back in the spring: with proper precautions, the rate of coronavirus transmission in schools is relatively low, especially among the youngest students; children who do get infected tend to have mild symptoms; and measures like mask-wearing, social distancing and air circulation are more effective than they had predicted.

But that does not mean open schools are risk-free. While schools are not known to have been a major source of outbreaks in western Europe and the United States, they were in Israel, when it wasn’t implementing social distancing in schools and relaxed a restriction requiring masks.

Students and staff members are still in danger of catching the virus and spreading it, particularly to family members who are threatened because they are older or have compromised immune systems. There are no perfect answers, so it is a matter of balancing one set of risks against another.

The European Center for Disease Prevention and Control found that children accounted for less than 5 percent of all cases of coronavirus reported in the 27 countries of the European Union and Britain, in a study released in August. The agency found that school closures would be “unlikely to provide significant additional protection of children’s health.”

Image President Emmanuel Macron of France announced in a national broadcast that the country will return to another lockdown for a minimum of four weeks to battle the rise in virus cases.Credit…Ian Langsdon/EPA, via Shutterstock

A French requirement for school children to wear masks will be expanded to include elementary school children, starting at age six. Previous regulations have only required children 11 and older to be masked.

But experts worry that just masks alone will not provide sufficient protection as long as the children continue to crowd into the cafeteria during their lunch periods, when their masks come off and the risk of droplets spreading while they sit together poses a risk of infection.

“Right now having lunch all together indoors with windows closed is a problem,” said Dr. Hélène Rossinot, a French doctor specializing in public health. “We proposed that could be served in the classrooms, that they not eat all together, just by class.”

Regularly opening windows to allow fresh air into classrooms would also help slow the spread of the virus, experts say, but that will become more difficult as the weather turns colder and wetter.

Germany didn’t introduce any new restrictions in schools on Wednesday. But since schools reopened the country has been requiring a variety of precautions.

German schools are required to draw up safety plans that include opening windows fully at least once during a class period and again during breaks to ensure ventilation, even when pupils are masked.

Germany’s public health authority has recommended that schools require people to wear masks when moving through hallways and that older students wear them while seated in class. Social distancing requirements include reducing class sizes so that children can sit farther apart, and keeping each student within the same cluster of others throughout the day, even on the playground.

If a region’s rate of infection rises to more than 50 people per 100,000 population, it recommends schools should move to blended or distanced learning. Other governments in Europe, and some in the United States, have adopted similar rules suggesting or mandating that where infections reach a certain threshold, school close.

Many people are concerned about open schools, but unlike parts of the United States, Europe has seen little resistance to them, from either parents or teachers. In general, attendance is required and distance learning is not an option.

Teachers in France are concerned that requiring elementary school children to wear masks is not enough to ensure that everyone stays healthy. “We need to reduce the number of students being taught by moving to blended teaching,” Guislaine David, secretary-general of the SNUipp teachers union in the Seine-Maritime region told France2 television.

Many teachers in Germany worry that although precautions have been drawn up, not all schools are following them. They fear the political will to keep children in classrooms will prevail even in regions where health authorities recommend moving to distance-learning because the infection rate is too high.

“We say, yes keep schools open, and keep following the rules for the levels of infection,” said Heinz-Peter Meidinger, president of the German Teachers Association. “But do not keep schools open at any price.”