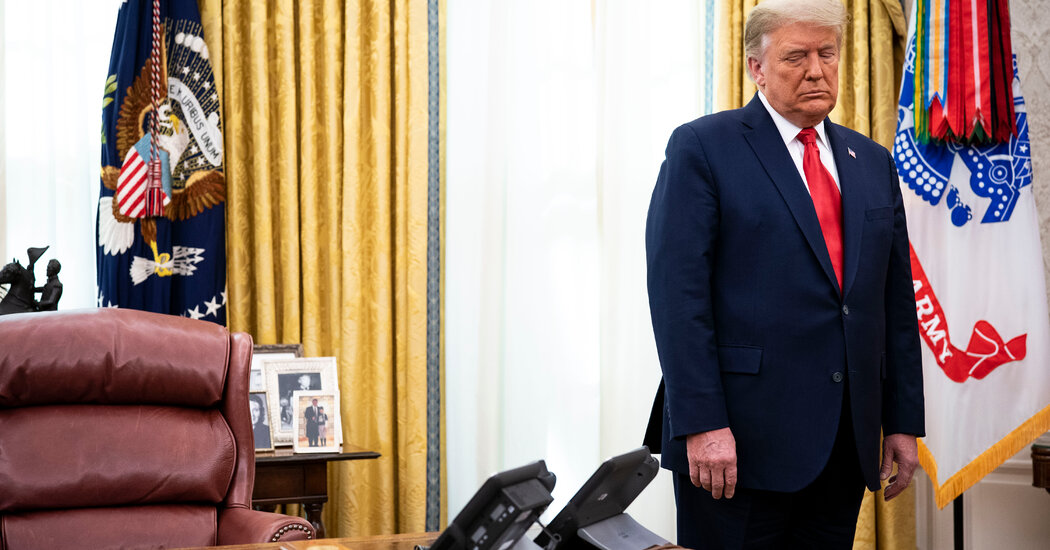 The last act of the Trump presidency has taken on the stormy elements of a drama more common to history or literature than a modern White House.

President Trump in the Oval Office on Thursday. He has continued to denounce the results of the election.Credit…Doug Mills/The New York Times

WASHINGTON — Over the past week, President Trump posted or reposted about 145 messages on Twitter lashing out at the results of an election he lost. He mentioned the coronavirus pandemic now reaching its darkest hours four times — and even then just to assert that he was right about the outbreak and the experts were wrong.

Moody and by accounts of his advisers sometimes depressed, the president barely shows up to work, ignoring the health and economic crises afflicting the nation and largely clearing his public schedule of meetings unrelated to his desperate bid to rewrite the election results. He has fixated on rewarding friends, purging the disloyal and punishing a growing list of perceived enemies that now includes Republican governors, his own attorney general and even Fox News.

The final days of the Trump presidency have taken on the stormy elements of a drama more common to history or literature than a modern White House. His rage and detached-from-reality refusal to concede defeat evoke images of a besieged overlord in some distant land defiantly clinging to power rather than going into exile or an erratic English monarch imposing his version of reality on his cowed court.

And while he will leave office in 46 days, the last few weeks may only foreshadow what he will be like after he departs. Mr. Trump will almost certainly try to shape the national conversation from his Mar-a-Lago estate in Florida and his relentless campaign to discredit the election could undercut his successor, President-elect Joseph R. Biden Jr. Although many Republicans would like to move on, he appears intent on forcing them to remain in thrall to his need for vindication and vilification even after his term expires.

On Saturday night, Mr. Trump took his unreality show to Georgia for his first major public appearance since the Nov. 3 election. A rally to support two Republican senators in a runoff next month offered a high-profile opportunity to vent his grievances and promote his false claims that he was somehow cheated of a second term by a vast conspiracy.

“You know we won Georgia, just so you understand,” he told supporters in a state that he lost by 12,000 votes, adding that he actually won other states where in fact he lost too. “They cheated and they rigged our presidential election, but we will still win it,” he declared as he pressured Republican state officials to overturn the results. “We just need somebody with courage to do what they have to do.”

At times, Mr. Trump’s railing-against-his-fate outbursts seem like a story straight out of William Shakespeare, part tragedy, part farce, full of sound and fury. Is Mr. Trump a modern-day Julius Caesar, forsaken by even some of his closest courtiers? (Et tu, Bill Barr?) Or a King Richard III who wars with the nobility until being toppled by Henry VII? Or King Lear, railing against those who do not love and appreciate him sufficiently? How sharper than a serpent’s tooth it is to have a thankless electorate.

“This is classic Act V behavior,” said Jeffrey R. Wilson, a Shakespearean scholar at Harvard who published the book “Shakespeare and Trump” this year. “The forces are being picked off and the tyrant is holed up in his castle and he’s growing increasingly anxious and he feels insecure and he starts blustering about his legitimate sovereignty and he starts accusing the opposition of treason.”

Others hear echoes from the East, recalling autocrats in the far reaches of the former Soviet Union barricading themselves in presidential palaces while furiously spinning out enemies-of-the-people propaganda to justify holding onto power after popular uprisings.

Alina Polyakova, the president of the Center for European Policy Analysis and a Russia scholar, said Mr. Trump reminded her of President Vladimir V. Putin, who has largely withdrawn from view recently amid public discontent in the late stages of an aging regime.

“Both also seem to be living in alternate realities surrounded only by those who confirm those realities,” she said. “But whereas one brooder will weather a slow and long decline, the other is increasingly facing a rapid decline and scrambling to do what he can to save his family and loyalists — and of course himself.”

Students of the American presidency, on the other hand, could think of no recent parallel. “As we move toward Inauguration Day, I have thought almost daily of a remark attributed to Henry Adams: ‘I expected the worst, and it was worse than I expected,’” said Patricia O’Toole, a biographer of Theodore Roosevelt and Woodrow Wilson as well as Adams.

Unlike any of his modern predecessors, Mr. Trump has not called his victorious opponent, much less invited him to the White House for the traditional postelection visit. Mr. Trump has indicated that he may not attend Mr. Biden’s inauguration, which would make him the first sitting president since 1869 to refuse to participate in the most important ritual of the peaceful transfer of power.

He has been enabled by Republican leaders unwilling to stand up to him, even if many privately wish he would go away sooner rather than later. After being called “profiles in cowardice” by an ally of the president, 64 Republican state legislators from Pennsylvania on Friday disavowed their own election and called on Congress to reject the state’s electors for Mr. Biden. Only 27 of 249 Republican members of Congress surveyed by The Washington Post publicly acknowledged Mr. Biden’s victory. Mr. Trump condemned them on Saturday as “RINOS,” meaning Republicans in name only.

“He really has paid attention to the base,” said Christopher Ruddy, a friend of the president’s and chief executive of Newsmax, part of the conservative news media megaphone that has amplified Mr. Trump’s allegations. “They got him elected and in his mind got him elected the second time. And they’re strongly in favor of this recount effort and they want him to continue this. In his mind, he’s not just doing this for himself he’s doing it for his supporters and for the country. He’s on a mission and he’s not going to be easily swayed.”

Mr. Trump’s Twitter feed is a fire hose of denial. “NO WAY WE LOST THIS ELECTION,” he wrote at one point in recent days. “We won Michigan by a lot!” he wrote at another of a state he lost by more than 154,000 votes. He reposted a message seeking to delegitimize Mr. Biden: “If he is inaugurated under these circumstances, he cannot be considered ‘president’ but instead referred to as the #presidentialoccupant.”

And he has turned on his own party, angry that Republican leaders have refused to accept his baseless claims and overturn the will of the voters. Shortly before arriving in Georgia on Saturday, Mr. Trump called Gov. Brian Kemp to press him to convene a special legislative session to supplant the results there, then lashed out at the governor at the rally for rebuffing him. “Your governor could stop it very easily if he knew what the hell he was doing,” Mr. Trump said. He also tweeted that Mr. Kemp and Gov. Doug Ducey of Arizona, another Republican stalwart, “fight harder against us than do the Radical Left Dems.”

He has been riled that his invented claims have been widely refuted. “Many people in the media — and even judges — so far have refused to accept it,” Mr. Trump said in a rambling 46-minute videotaped rant from the White House this past week. “They know it’s true. They know it’s there. They know who won the election, but they refuse to say you’re right. Our country needs somebody to say, ‘You’re right.’ ”

But even as the president desperately demands that somebody, anybody, tell him that he is right, no one in a position of authority has done so other than blood relatives, paid lawyers and partisan soul mates. The election has been certified and accepted not just by Democrats but also by key Republican governors, secretaries of state, election officials, city clerks, judges and even Trump administration officials.

After his own cybersecurity czar endorsed the integrity of the election, Mr. Trump fired him. Now that Attorney General William P. Barr has said he saw no fraud that would overturn the results, he may be next.

Mr. Trump’s video was so out of touch with the facts that both Facebook and Twitter appended warning notices lest viewers actually believe what the president of the United States was telling them. Which explains why the only topic other than the election to draw Mr. Trump’s interest over the last week was the annual defense bill that he vowed to veto because Congress did not strip legal protection for big technology companies as he has demanded.

By contrast, he expressed little interest in the coronavirus now ravaging the country or the resulting economic devastation. Rather than “rounding the corner,” as Mr. Trump insisted once again on Saturday night, the pandemic this past week began killing a record high of nearly 3,000 people in the United States every day, almost the equivalent of another Sept. 11, 2001, attack every 24 hours.

Mr. Trump made no comment on that in his Twitter rants nor about the latest jobs report documenting the economic toll. His only four tweets mentioning the virus were about defending his own handling of it, including reposted messages asserting that “The president was RIGHT.”

As the circle around Mr. Trump shrinks and even allies like Mr. Barr distance themselves, the president resists any suggestion that he stand down. “I’m never, ever going to concede,” he told one ally who urged him to prepare to do so. And if he is not listening to advisers, many are no longer listening to him.

At one point, Mr. Trump appeared to telephone Mr. Ducey even as he was certifying Arizona’s results on live television and the governor refused to take the president’s call, which was announced by a “Hail to the Chief” ring tone.

Top Republican lawyers have dropped off his election lawsuits, which have been dismissed by the dozens and even in one case declared “bizarre” by a judge appointed by Mr. Trump. Five courts in five battleground states rejected his latest legal challenges to the election in a little more than three hours on Friday, with a Wisconsin judge warning that “this is a dangerous path we are being asked to tread.”

Sliding further from the mainstream, the president has aligned himself more with fringe news outlets like One America News Network and the conspiracy theorists of QAnon, who believe the world is run by a cabal of Satan-worshipping pedophiles plotting against Mr. Trump. In a meeting with Republican senators, according to an official confirming a report in The Post, Mr. Trump said QAnon followers “basically believe in good government,” a comment that left the room silent until his chief of staff, Mark Meadows, volunteered that he had never heard them described that way.

With six weeks until he leaves office, Mr. Trump remains as unpredictable and erratic as ever. He may fire Mr. Barr or others, issue a raft of pardons to protect himself and his allies or incite a confrontation overseas. Like King Lear, he may fly into further rages and find new targets for his wrath.

“If there are these analogies between classic literature and society as it’s operating right now, then that should give us some big cause for concern this December,” said Mr. Wilson, the Shakespearean scholar. “We’re approaching the end of the play here and that’s where catastrophe always comes.”

Here’s Why Vaccinated People Still Need to Wear a Mask