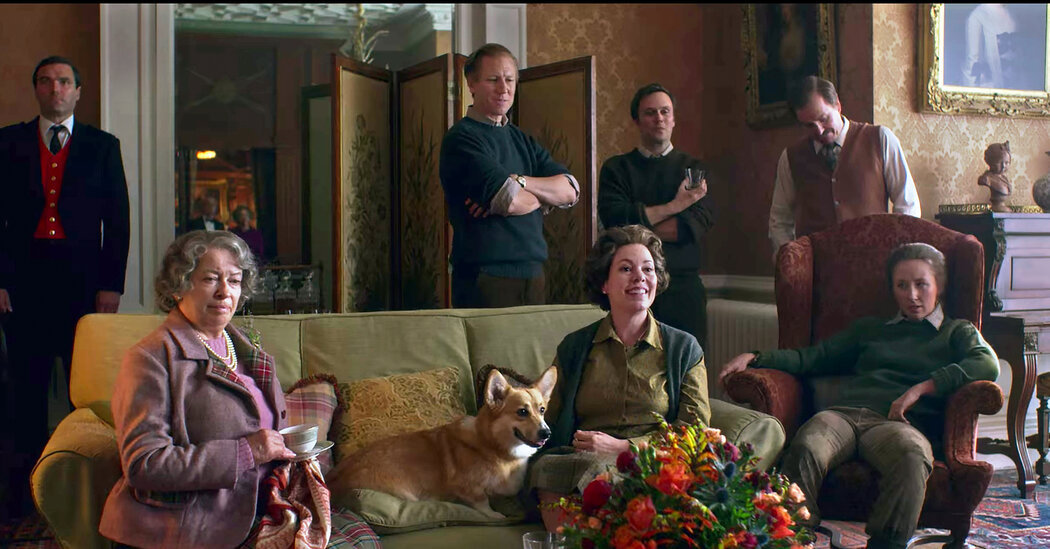 A lack of hard facts has not prevented plenty of speculation as to whether Queen Elizabeth and the other members of the royal family ever watch their fictionalized selves.

The new season of “The Crown” has led to a new round of speculation about the watching habits of the royal family.Credit…Netflix

If there were a TV show that portrayed your family as a clueless bunch of snobs and philanderers who helped drive a mentally fragile young princess to despair, would you watch it?

“Frankly, think about it,” said Valentine Low, who writes about royal affairs for The Times of London. (Yes, we’re talking about “The Crown” and the British royal family here.) “If you were a member of the royal family, there’s no upside to watching it at all. All it’s going to do is annoy you. The idea of them sitting down and having a laugh and watching it — nothing has ever convinced me that that is plausible.”

The latest “Crown” season, which sets out the origin story of the doomed marriage between Prince Charles and Diana, Princess of Wales, has upset the British news media (and possibly the British public, though it is unclear how much one speaks for the other) by stirring up messy old controversies and raising tantalizing new questions.

These questions include: How accurate is it? (Somewhat accurate, but also quite inaccurate.) Is there really an asinine drinking game called Ibble Dibble that may or may not be beloved by the British upper classes? (Yes.) And perhaps most unanswerable of all: Are the royal family themselves consumers of “The Crown”?

Anyone who knows the answer to that could not possibly comment.

“I am sorry but we never comment on ‘The Crown,’” Donal McCabe, Queen Elizabeth’s communications secretary, said via email.

The very thing that makes “The Crown” such catnip to viewers — that it imagines in vivid detail what the members of the pathologically private Windsor family say to each other behind closed doors — is the same thing that makes attempting to discover what the family thinks about the series an exercise in futility.

So tight-lipped and aggressively discreet are the royals about their personal lives, so loath are they to exhibit any hint of public self-examination, that the idea of them willingly adding oxygen to the conversation around “The Crown” is inconceivable.

Jonny Dymond, the BBC’s royal correspondent, said that whenever reporters ask royal sources — unnamed staff and household members authorized to “talk to mere mortals,” i.e. members of the news media — about “The Crown,” the answer is always: “I don’t know, and if I did, I wouldn’t tell you.”

He went on: “We know that the household and the senior staff watches it, and we know that they are concerned about it. But do the family watch it? We simply don’t know.”

Image “I am sorry but we never comment on ‘The Crown,’” said Queen Elizabeth’s communications secretary.Credit…Pool photo by Wpa

That hasn’t stopped people from asking. It’s become something of an exercise in competitive royal Kremlinology, in fact, to track down any inkling of any remark that any Windsor, however minor, may or may not have made about “The Crown” at one time or another.

Let’s start with Queen Elizabeth, who generally limits her unscripted public comments to such topics as the weather and is famous for saying, when meeting new people at social occasions, “Have you come far?”

“She is bound to have heard of ‘The Crown,’ but the Queen has never confirmed whether she actually watches it,” The Express reported. However, the paper added, “a senior royal source told the Sunday Express in 2017 the Queen has watched ‘The Crown’ before.”

According to the 2017 account, the queen’s son Edward and his wife, Sophie, often join the queen “for an informal supper while watching TV or a film” and happen to be fans of the program. “They have a Netflix account and urged her to watch it with them,” the paper said. “Happily, she really liked it, although obviously there were some depictions of events that she found too heavily dramatized.”

Meanwhile, the actress Vanessa Kirby, who plays Princess Margaret in the first two seasons, told Vanity Fair a few years ago that a friend of hers had once “met one of Queen Elizabeth’s granddaughters: Princess Eugenie — or was it Beatrice? — who said that her granny loved it.”

Hmm, said Richard Palmer, who writes about the royals for The Daily Express. “I’m pretty sure that the queen, Prince Philip and Prince Charles don’t watch ‘The Crown,’” he said via email.

The arrival of the current season, at a moment when much of Britain is in Covid-related lockdown, has meant that “The Crown” is an even bigger topic than it might be otherwise. Without much of substance to report, many papers are producing conditionally tensed articles about what the royals would think, if they were to watch the show.

The new season delves into the doomed marriage between Prince Charles and Diana, Princess of Wales, who are played by Josh O’Connor and Emma Corrin.Credit…Netflix

“If the Duke of Edinburgh could bring himself to watch ‘The Crown,’ he would doubtless be most shocked by the spectacle of the man impersonating him shooting pheasants in August,” Simon Heffer wrote in The Daily Telegraph, saying that the series had caused “unintentional hilarity” among the cognoscenti. (Another of his objections: The queen would say “field sports” — not “blood sports,” as she says in the series — to describe hunting.)

Some royals are apparently being performatively anti-“Crown,” making their views (if in fact they have views) known via a network of “friends.” This is especially true of Prince Charles, who has spent years trying to live down the battering his reputation took after he and Diana divorced and then, not long afterward, she was killed in a car crash. The current series reminds us that his relationship with his current wife, the former Camilla Parker-Bowles, overlapped with his relationship with Diana, and that Diana was not happy about it.

Does Charles watch “The Crown”? No way, say his friends — or his “friends.”

“The Prince of Wales has refused to watch ‘The Crown’ and is purposely distancing himself from it,” Victoria Ward wrote in The Daily Telegraph. She went on to quote unnamed Charles supporters as saying it was “terrible” that his name was being “dragged through the mud.”

Does Prince William, the son of Charles and Diana, watch “The Crown”?

If he did, he would not like it, either, The Daily Mail reported.

Images of his parents’ unhappy marriage “will no doubt also irritate Prince William,” the paper said, citing “one insider.”

The “insider” continued: “The Duke of Cambridge is none too pleased with it. He feels that both his parents are being exploited and being presented in a false, simplistic way to make money.”

For what it’s worth, Olivia Colman, who plays the queen, said she once sat next to Prince William at a dinner, and that while he was charming and gracious, their exchange “didn’t go very well” when “The Crown” came up.

“He asked what I was doing at the moment before he quickly added, ‘Actually, I know what you’re doing,’” she told an interviewer. I was so excited and asked, ‘Have you watched it?’ His answer was a firm ‘No.’”

And Matt Smith, who played Prince Philip in the first two seasons, told The Observer that a “man of prominence in the film world” whom he knows was once asked by Prince Philip, also at a dinner, whether he was “involved in this ‘Crown’ thing.”

No, the man replied.

But after a bit, unable to contain his curiosity, the man said: “Philip, I’m just wondering, because I have some friends who made “The Crown,” have you watched any?”

Philip glowered at him. “Don’t be ridiculous,” he said.