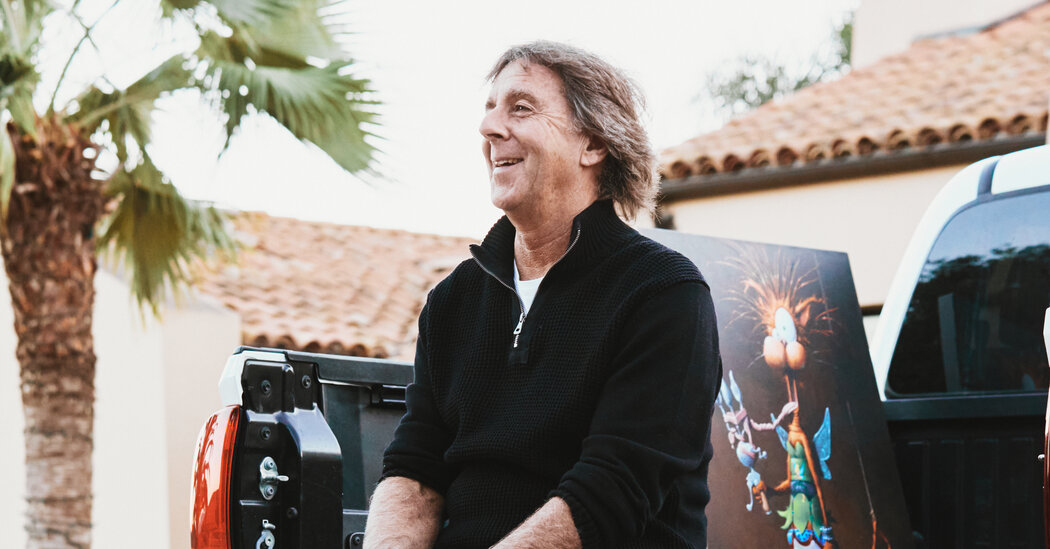 The cartoonist Berkeley Breathed introduced us to “Bloom County” and its eclectic residents — including the penguin Opus, whose bulbous nose was only eclipsed by his big heart — 40 years ago. The newspaper strip, which originally ran from Dec. 8, 1980, to Aug. 6, 1989, offered a satirical look at pop culture and politics and earned Breathed, 63, a Pulitzer for editorial cartooning in 1987 — much to the chagrin of some editorial cartoonists.

Another surprise came in 2015: new strips. At the time of its second premiere, Breathed said, “I had planned to return to ‘Bloom County’ in 2001, but the sullied air sucked the oxygen from my kind of whimsy.” By 2015, however, it seemed the country was ready for silliness again, he said, and he began posting new strips on Facebook which have continued occasionally through this year. One difference about the new endeavor? “No deadlines,” he wrote during a recent email interview. “Age brings such wisdom,” he added.

Image Berkeley Breathed said that one of his favorite strips is this one, from “Outland,” that shows how Bill the Cat deals with a familiar “Met Life” insurance agent. Good grief!Credit…Berkeley Breathed

In honor of the 40th anniversary of the birth of “Bloom County,” Breathed answered questions by email about its beginning, its future and a somewhat faulty Opus telephone. These are edited excerpts from the interview.

What was the initial inspiration for “Bloom County”?

In 1980, two months out of college, the Washington Post sent me a syndication contract. Under “Name of Feature and characters” was a blank space. I wrote in “TBD.”

Nobody had the faintest idea what comic strip I should concoct, least of all me. They didn’t care. All I’d ever drawn were college stereotypes, which were the only characters I was instructed NOT to use. What to do?

I named it a place — Bloom County — and figured I’d decide later who should live there. Hadn’t a clue. If you were to substitute “Maycomb, Ala.,” the setting for “To Kill a Mockingbird,” for “Bloom County,” you would have guessed the correct literary inspiration for the setting. You’ll imagine the delight I took years later when I received a fan letter from Harper Lee, who eventually tried her best to convince me not to end Opus’s comic life a decade later. I told her I’d reconsider if she brought back Boo Radley. We remained in a standoff.

When did you come up with Opus?

I’d cook up some baloney to make it interesting, but Trump has made creative fibbing unrascalish. His greatest sin.

I was a year in on “Bloom County” and hugely bored of drawing people standing in profile. Saddled with vertical boxes, I needed an animal that could stand and fit in the damn rectangles that wasn’t a beagle nor a fat orange cat. Any child will tell you that that leaves penguins: They’re already standing, they don’t look particularly naked and they have the blissful countenance of looking always about to say something pleasant. New penguin’s name? It was a blazing hot June Iowa night around 3 a.m., I was slightly drunk and the disc jockey of Iowa City’s only rock station, KRNA, yelled out the name of his next song from the group Kansas — one that could only be played at such an hour: “Magnum Opus.” Things sometimes happen.

After a long hiatus, a new installment of “Bloom County” was posted on Facebook on July 13, 2015, the first in a series of new adventures for the characters.  Credit…Berkeley Breathed

What is the most memorable or regrettable “Bloom County” merchandise?

An Opus telephone. We spent months engineering it so Opus’s head turned when you pulled the handset out of his back. The phone would tip over onto the floor each time. I didn’t see why that should be a problem. I’d like to apologize right here about that.

Do you have a favorite strip?

I will occasionally laugh at my own material. Akin, I suppose, to applauding your kid if he kicks a goal or marries really well, but more embarrassing. There is a single frame where Bill the Cat has half swallowed Snoopy still holding his “Get Met” briefcase. Don’t show that to me if I’m eating soup. I chose the right line of work, one presumes.

The return engagement of “Bloom County” includes familiar faces like Opus the Penguin, and new characters like Sam, a young boy with cancer, who is pictured with a lightsaber.Credit…Berkeley Breathed

Were the deadlines hard on you? Are there any strips you wish you could revisit?

Read this carefully: “Bloom County” had a weekly deadline for 10 years. I missed 100 percent. Each of those 500 weeks, I had to drive 40 miles at 4:30 a.m. to the airport at whatever city I lived in to put the strips on a plane as cargo, delivered by a cabdriver in Washington, D.C., a few hours later. Every. One.

The strips I’d like more time with? All of “Bloom County.” I’ll have a psychologist explain this one day, when I can face it. One theory is that sleeplessness accounted for the oddly seductive style of the strip’s writing. Well.

You often push against the mainstream. Was the popularity of Opus difficult for you?

No, it was the delight of my life. Any actor, writer, artist or filmmaker who isn’t moved by a fan telling them what their invented nonsense meant to the lives of people who embraced it all should be shot. A rare privilege.

Asked which strip he’d like to go back and tweak, Breathed said the whole run of “Bloom County.” “I’ll have a psychologist explain this one day, when I can face it.”Credit…Adam Amengual for The New York Times

What was it like winning a Pulitzer and how did you feel about the backlash?

As the saying goes, a Pulitzer really only guarantees what the first words of your obituary will be. The editorial cartoonists of the late ’80s were anxious to hurry that process along. Fussbudgets, all of ’em.

Is there any question you wanted to be asked in an interview, but never were?

Will we ever see “Bloom County” go into TV production? “New York Times: OK, will we?” Possibly very soon, thank you for asking. Speaking of deadlines …

A Homey Party House in SoHo

Spectators From Overseas Are Barred From Tokyo Olympics