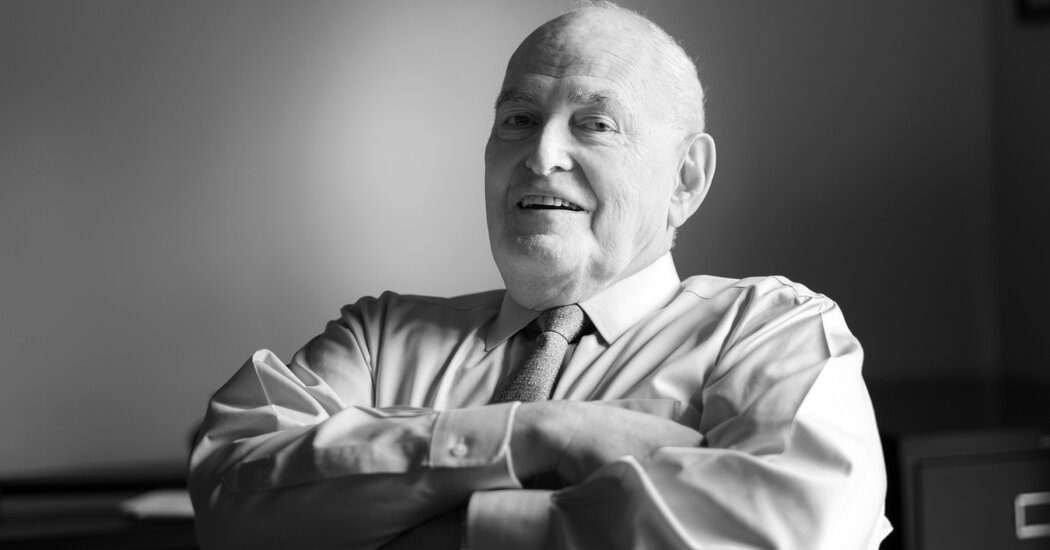 A Kissinger protégé (and a pre-eminent textile art collector), his fingerprints can be found on many of the leading postwar institutions linking the two allies.

Guido Goldman in 2017. He was at ease among presidents and chancellors, civil rights leaders and artists — relationships he drew on to create the sort of person-to-person ties critical to international comity.Credit…David Elmes, via Minda de Gunzburg Center for European Studies Harvard University

Guido Goldman, a renaissance man who used his vast wealth and extensive network of friendships in politics and the arts, from Henry A. Kissinger to Harry Belafonte, to help rebuild America’s relationship with Germany after World War II, died on Nov. 30 at his home in Concord, Mass. He was 83.

His death was confirmed by Karl Kaiser, a close friend and political scientist at Harvard, where Mr. Goldman studied and with which he remained closely affiliated for decades. The cause was prostate cancer.

Mr. Goldman’s fingerprints can be found on many of the leading postwar academic and cultural institutions linking the United States and Germany, from the Minda de Gunzburg Center for European Studies at Harvard, which he founded with his mentors Mr. Kissinger and Stanley Hoffmann, to the German Marshall Fund, which he persuaded Willy Brandt, the chancellor of West Germany, to endow in 1972.

But more than any single institution, Mr. Goldman’s greatest contribution to trans-Atlantic relations was himself: By all accounts witty, generous and cosmopolitan in his imposing six-foot frame, he was at ease among presidents and chancellors, civil rights leaders and artists — relationships he drew on to create the sort of person-to-person ties critical to lasting international comity. When the new U.S. Embassy opened in Berlin in 2008, he arranged a performance by the Alvin Ailey American Dance Theater, of which he was a longtime board member.

Image Mr. Goldman, left, joined Henry A. Kissinger and German Chancellor Angela Merkel at an event in Berlin in 2017 marking the 70th anniversary of the Marshall Plan. Credit…Lena Ganssmann, via German Marshall Fund

“Guido was an impresario, the honest broker who stayed out of the limelight,” said Josef Joffe, the publisher-editor of the German newspaper Die Zeit. “I can’t think of anyone like him in our age, when you don’t exist if you’re not in print or on camera.”

Mr. Goldman inherited his larger-than-life stature from his father, Nahum Goldmann, a leading figure in the Zionist movement, and his mother, Alice (Gottschalk) Goldmann, a German painter and heiress to a fortune built on mail-order catalogs — wealth that later enabled Mr. Goldman to make his early forays into academic philanthropy.

He was born in Switzerland, but his father, fearing the long reach of the Nazi regime, moved the family to New York in 1940. Mr. Goldman and his older brother, Michael, were raised in a spacious Upper West Side apartment, where his parents mingled with world leaders, artists and entertainers.

“People like Arthur Rubinstein played piano at the Goldmanns’, and Eleanor Roosevelt came by for dinner,” Martin Klingst, the author of a forthcoming biography of Mr. Goldman, said in a phone interview.

Later, as a student and then a lecturer in government at Harvard, Mr. Goldman drew on his father’s connections to establish a long list of research centers, fellowships and endowed chairs, all with a focus on Germany and Europe, ultimately bringing in more than $75 million for the university.

In 1971, with the 25th anniversary of the Marshall Plan fast approaching, the West German government sought out Mr. Goldman’s advice on how to commemorate that monumental American effort to help Western Europe recover from World War II. He laid out a plan for a think tank backed by a hefty endowment from Germany, the blueprint for the German Marshall Fund. Mr. Goldman became its first president and board chairman, a position he held for the next four decades.

Raised in the traditions of the European educated elite, Mr. Goldman developed passions that ranged far beyond politics.

In the mid-1970s he began buying ikat, a textile art — specifically ikat from early 19th-century Uzbekistan, whose vibrant, abstract colors reminded him of the later works of Wassily Kandinsky, his favorite artist. He eventually amassed one of the world’s largest collections of ikat, which he later donated to the Smithsonian and other institutions.

He fell equally in love with dance after his brother married a performer with the Alvin Ailey troupe. As a member of the board, Mr. Goldman paid for everything from sprung floors to lawyers to help foreign dancers with visa issues, said Judith Jamison, the former artistic director. “He really spoiled me silly.”

Mr. Goldman with Judith Jamison, the former artistic director of the Alvin Ailey American Dance Theater, at a gala event for the company in 2011 at the Apollo Theater in Harlem. Mr. Goldman was a member of the troupe’s board for many years.Credit…Johnny Nunez/WireImage

Guido Goldmann was born on Nov. 4, 1937, in Zurich. His parents had fled Berlin after his father, a co-founder and president of the World Jewish Congress, received a tip that the Gestapo had searched his office.

Three years later, his father decided to move the family to America, where at some point in the bureaucratic shuffle of immigration, the second “n” in Mr. Goldman’s name fell off, and he never bothered to replace it. He attended the Birch Wathen School, now the Birch Wathen Lenox School, on the Upper East Side of Manhattan, before enrolling at Harvard.

Mr. Goldman never married. He is survived by his brother, who lives in Los Angeles.

In Manhattan, Mr. Goldman’s father, who was also the president of the World Zionist Organization, proved critical in winning support for Israeli independence in the United Nations. He instilled in his sons a commitment to social justice, which led Mr. Goldman to underwrite civil rights activism in the 1960s and ’70s.

A liberal Democrat, Mr. Goldman did not follow Mr. Kissinger into the Nixon White House. But he remained Mr. Kissinger’s confidant, reporting back to him after his frequent trips to West Germany to meet with leading politicians there. He helped Mr. Kissinger in other ways too: He let him stay in his apartment when Mr. Kissinger was in New York, bodyguards in tow, and he even lent him two pieces of art to hang in his office at the White House.

Already rich from his mother’s inheritance, Mr. Goldman amassed even more wealth during the 1970s and ’80s as a real-estate investor and private money manager — money that he gladly, and often anonymously, dispensed among his friends and people he admired, including civil rights activists like Mr. Belafonte and Marian Wright Edelman, the founder of the Children’s Defense Fund.

“He was one of the most generous connectors of friends and institution creators I’ve ever encountered,” Ms. Edelman said.

Mr. Goldman in 1999 with a piece from his immense collection of ikat wall hangings and caftans from Central Asia. They were on view at the Jewish Museum in New York.Credit…Suzanne DeChillo/The New York Times

For all his globe-trotting and hobnobbing, his friends said Mr. Goldman was happiest as a dining-table raconteur, telling stories and jokes. Late in the evening, he might bring out a shearling coat he had bought secondhand; it was, he would declare proudly, once owned by Snoop Dogg.

“If you were at a dinner party and you found yourself seated next to him, wow, that was your lucky night,” said Karen Donfried, the president of the German Marshall Fund. “Every one of us is unique, but there is only one Guido Goldman.”