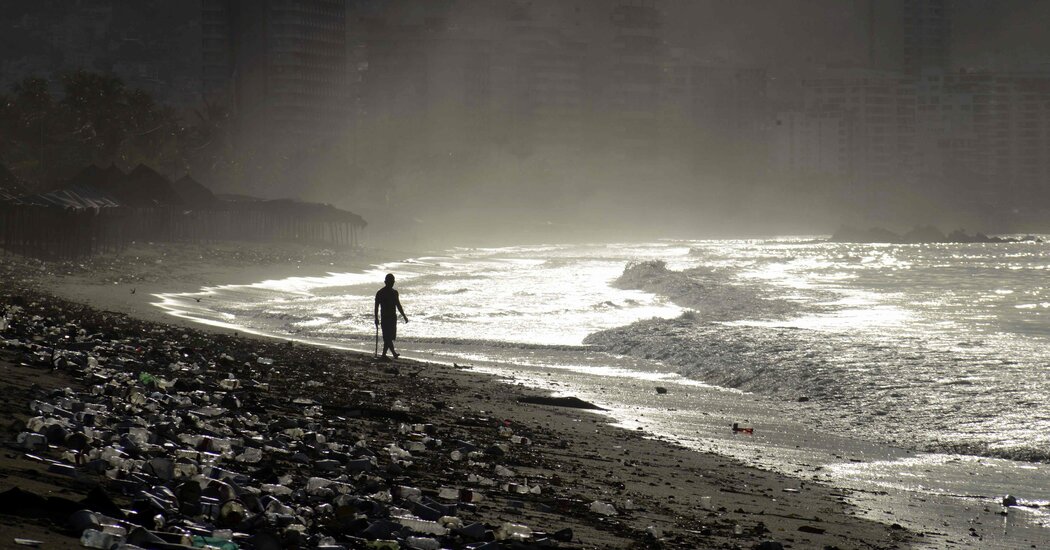 The United States is using more plastic than ever, and waste exported for recycling is often mishandled, according to a new study.

The United States contribution to coastal plastic pollution worldwide is significantly larger than previously thought, possibly by as much as five times, according to a study published Friday.

The research, published in Science Advances, is the sequel to a 2015 paper by the same authors. Two factors contributed to the sharp increase: Americans are using more plastic than ever and the current study included pollution generated by United States exports of plastic waste, while the earlier one did not.

The United States, which does not have sufficient infrastructure to handle its recycling demands at home, exports about half of its recyclable waste. Of the total exported, about 88 percent ends up in countries considered to have inadequate waste management.

“When you consider how much of our plastic waste isn’t actually recyclable because it is low-value, contaminated or difficult to process, it’s not surprising that a lot of it ends up polluting the environment,” said the study’s lead author, Kara Lavender Law, research professor of oceanography at Sea Education Association, in a statement.

The study estimates that in 2016, the United States contributed between 1.1 and 2.2 million metric tons of plastic waste to the oceans through a combination of littering, dumping and mismanaged exports.

At a minimum, that’s almost double the total estimated waste in the team’s previous study. At the high end, it would be a fivefold increase over the earlier estimate.

Nicholas Mallos, a senior director at the Ocean Conservancy and an author of the study, said the upper estimate would be equal to a pile of plastic covering the area of the White House Lawn and reaching as high as the Empire State Building.

The ranges are wide partly because “there’s no real standard for being able to provide good quality data on collection and disposal of waste in general,” said Ted Siegler, a resource economist at DSM Environmental Solutions, a consulting firm, and an author of the study.

Mr. Siegler said the researchers had evaluated waste-disposal practices in countries around the world and used their “best professional judgment” to determine the lowest and highest amounts of plastic waste likely to escape into the environment. They settled on a range of 25 percent to 75 percent.

Tony Walker, an associate professor at the Dalhousie University School for Resource and Environmental Studies in Halifax, Nova Scotia, said that analyzing waste data can amount to a “data minefield” because there are no data standards across municipalities. Moreover, once plastic waste is shipped overseas, he said, data is often not recorded at all.

Nonetheless, Dr. Walker, who was not involved in the study, said it could offer a more accurate accounting of plastic pollution than the previous study, which likely underestimated the United States’ contribution. “They’ve put their best estimate, as accurate as they can be with this data,” he said, and used ranges, which underscores that the figures are estimates.

Of the plastics that go into the United States recycling system, about 9 percent of the country’s total plastic waste, there is no guarantee that they’ll be remade into new consumer goods. New plastic is so inexpensive to manufacture that only certain expensive, high-grade plastics are profitable to recycle within the United States, which is why roughly half of the country’s plastic waste was shipped abroad in 2016, the most recent year for which data is available.

Since 2016, however, the recycling landscape has changed. China and many countries in Southeast Asia have stopped accepting plastic waste imports. And lower oil prices have further reduced the market for recycled plastic.

“What the new study really underscores is we have to get a handle on source reduction at home,” Mr. Mallos said. “That starts with eliminating unnecessary and problematic single-use plastics.”