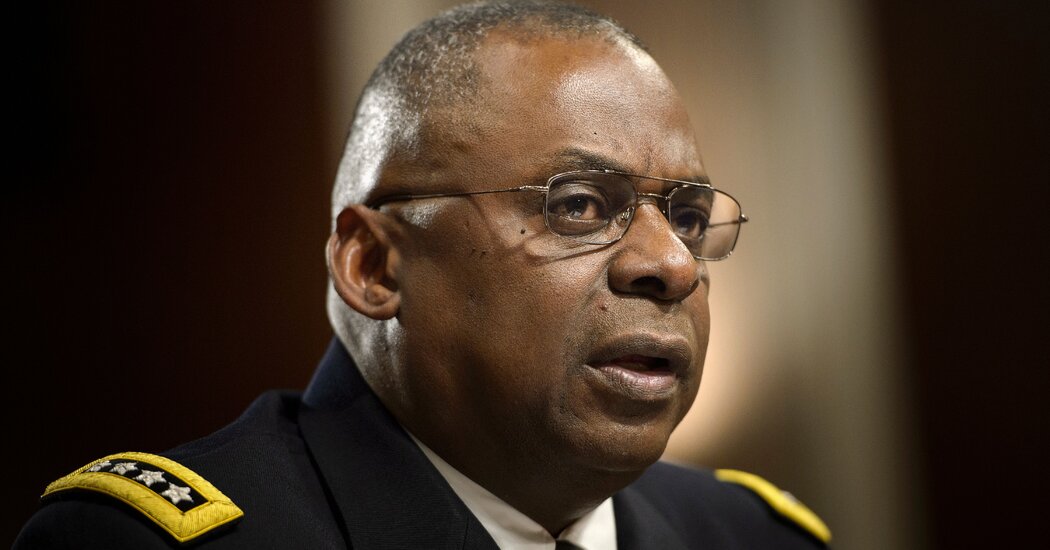 After a tumultuous four years, we need civilian leadership and a return to normalcy.

Mr. Golby has been a special adviser to Vice Presidents Joe Biden and Mike Pence.

General Austin is a capable and respected former commander of Central Command, but a civilian — not a recently retired general — should lead the Pentagon.

As it is, Mr. Biden will need a Congressional waiver; the National Security Act of 1947 requires a prospective secretary to wait seven years after ending active duty as a commissioned officer and General Austin retired only in 2016. It would be only the third time a president has requested a waiver — President Harry Truman for George Marshall in 1950, and President Trump for James Mattis.

The legislators who negotiated the original security act believed only unique circumstances might dictate that a newly retired general or admiral should lead the Defense Department. They codified into law a 10-year cooling-off period (which Congress in 2008 reduced to seven years).

Senator Harry Cain of Washington was particularly worried that recently retired officers would be too cozy with their friends still on active duty. When Truman sought a waiver for Marshall, Cain opposed the former general for that reason, even though Marshall had already served admirably as secretary of state.

Cain’s concerns were vindicated by history. Marshall stood by as a civil-military crisis slowly developed between Truman and Gen. Douglas MacArthur, Marshall’s former Army peer. Marshall even tried to avert MacArthur’s firing for insubordination, related to Truman’s Korean War policy, before reluctantly backing the president’s call. It is telling that today we remember Marshall more for his time as secretary of state than for his tenure as defense secretary.

When President Trump nominated Mr. Mattis, a former Marine general, some experts believed a congressional exception was warranted. Mr. Trump came to the office with less national security experience than any president in history, and some thought Mr. Mattis would provide a steady hand — as one of the “adults in the room” — to resist the president’s worst tendencies. Although his tenure raised some serious civil-military concerns, there is a strong case that Mr. Mattis did exactly that.

But like Marshall, Mr. Mattis remained close to his former colleagues in uniform. When Trump administration infighting left key civilian jobs unfilled, Mr. Mattis leaned heavily on the chairman of the Joint Chiefs, Gen. Joseph Dunford, and other military officers. Civilian political leaders in the Pentagon seemed to be sidelined.

Without a strong secretary to run interference, Mr. Trump’s petulance and wrath often replaced process and respect at the Pentagon. At times, the president lashed out — as he did in ordering troop levels reduced to 2,500 in both Afghanistan and Iraq before Jan. 15. Mr. Trump’s postelection purge of civilian leaders has left the Defense Department hollowed out.

The Pentagon now needs to re-establish traditional national security processes and return to a sense of normalcy. President-elect Biden no doubt will want to streamline civilian oversight of war plans, increase transparency surrounding military operations and chart a new and perhaps very different vision for the defense budget.

But appointing another retired general to lead the Pentagon will not help return things to normal. Even if a retired general like Mr. Mattis was the right person for the Trump era, that era is over. A legislative exception granted at an exceptional moment should not become the new rule.

After four years of relative, if erratic, autonomy under Mr. Trump, military leaders may chafe when civilian national security leaders ask to check their homework. To some extent, that is healthy. Too much friction can also stop or slow progress, true, but a certain level is necessary for proper governance.

The need for experienced leadership in the Pentagon to manage this friction is vital. As even George Marshall realized, Mr. Biden would be wise to select a strong civilian who is up to the task.

At Marshall’s confirmation hearing, Senator Lyndon Baines Johnson asked him about civilian control. Marshall reflected that as a second lieutenant, “I thought we would never get anywhere in the Army unless a soldier was secretary of war.” But he added, “As I grew a little older and served through some of our military history, particularly the Philippine insurrection, I came to the fixed conclusion that he should never be a soldier.”

Marshall understood that military training and experience can be inadequate preparation for the political challenges facing a defense secretary. Marshall, like General Mattis, served because the president asked him to do so. But the MacArthur episode demonstrated that a retired general was not, in fact, the right person to help Truman keep other generals under control.

President-elect Biden should not put Lloyd Austin, nor any other recently retired general or admiral, in the same position. General Austin is a fine public servant, and he may well continue his service to the nation out of uniform. But the Pentagon would be the wrong place for him to do it.

Jim Golby, a senior fellow at the Clements Center for National Security at the University of Texas at Austin, has been a special adviser to Vice Presidents Joe Biden and Mike Pence and to the chairman of the Joint Chiefs of Staff.

How Francis Ford Coppola Got Pulled Back In to Make ‘The Godfather, Coda’