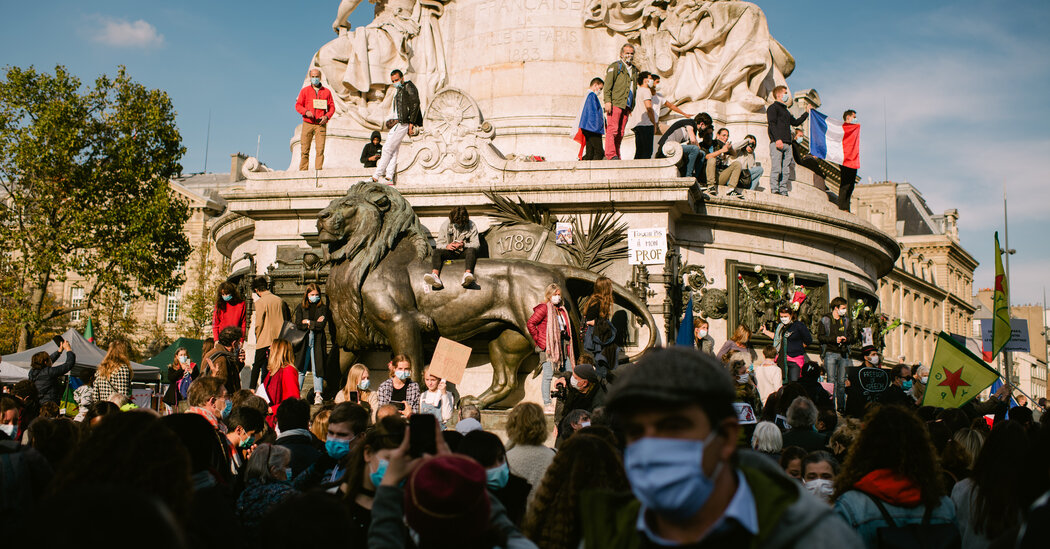 The French government says draft legislation aimed at combating the extremist ideology that has taken many lives on French soil in recent years is a “law of freedom” necessary for peaceful coexistence.

A demonstration against the beheading of Samuel Paty, a history teacher, in Paris in October.Credit…Dmitry Kostyukov for The New York Times

PARIS — The French government, determined to combat an ideology it views as “the enemy of the Republic,” on Wednesday unveiled draft legislation to combat radical Islamism, calling the measure “a law of freedom” essential to peaceful coexistence in French society.

The law, which has been assailed by Turkey and other Muslim countries, and criticized as “heavy-handed” by the U.S. envoy on international religious freedom, reflects President Emmanuel Macron’s resolve to address a series of terror attacks that have left more than 260 people dead in France since 2015. Three such attacks in recent months, including the beheading of a history teacher, Samuel Paty, who had shown caricatures of the Prophet Muhammad to his class, have hardened positions around the legislation.

Earlier, Mr. Castex told the French daily Le Monde that “The enemy of the Republic is an ideology that calls itself radical Islamism, whose objective is to divide French people from one another.”

The legislation would curb online hate speech of the kind that led to Mr. Paty’s killing; punish doctors who provide so-called “virginity certificates” for traditional religious marriages; clamp down on home-schooling for children over three years old; and rein in community associations by obliging them to sign declarations of allegiance to the “values of the republic” at the same time as imposing strict controls on their funding.

The words “Islamic” or “Islamist” do not appear in the legislation, but the government’s intent is clear: To get at the root of the separate culture of extremist groups holding the laws of Islam as superior to the laws of the Republic.

To its opponents, the draft law risks defeating itself. The danger of a conflation of Islam, the religion, and Islamism, a political movement, is evident. The bill could sharpen the sense of alienation felt by some, but far from all, French Muslims, who make up about 8 percent of the population. The ghettoization of Muslim immigrants of mainly North African origin in dismal projects on the outskirts of big cities is a longstanding social problem that successive governments have promised to address, with limited success.

The bill has gone through three name changes, reflecting its sensitivity, starting life as an “anti-separatism” law and ending up as a law “to reinforce Republican principles.” It will be presented to the National Assembly, or lower house of Parliament, in January.

Its genesis lay in a speech Mr. Macron made two months ago in which he vowed to defeat “Islamist separatism” and uphold French secularism, with its strict view that religion is an affair of the individual that has no place in politics. The speech was denounced as a “provocation” by President Recep Tayyip Erdogan of Turkey, a view rejected by many French people, who have suffered through successive attacks.

Muslim shopkeepers and workers bringing flowers to the Notre-Dame basilica in Nice after a knife attack in October.Credit…Mauricio Lima for The New York Times

Ambassador Sam Brownback, the U.S. ambassador at large for international religious freedom, said this week that he was concerned by events in France. Referring to the draft law, he said, “When you get heavy-handed, the situation can get worse.”

France is unlikely to be much concerned by this view from a representative of the outgoing Trump administration. President Trump’s so-called “Muslim ban,” barring the entry of foreign nationals from seven Muslim-majority countries, was condemned widely in France and around the world.

Mr. Macron, facing an election 18 months from now, has been tacking to the political right, where, with the left in tatters, the center of gravity in French politics appears to lie. His tough line on Islamism and the introduction of a much-contested security bill form part of this strategic evolution.

A protest against Mr. Macron in Istanbul in October.Credit…Chris Mcgrath/Getty Images

In his October speech, Mr. Macron conceded that the French state had suffered from “its own form of separatism,” in failing to address the marginalization of some Muslims in France. He vowed to right this wrong, but there has been scant follow-up.

Mr. Castex, the prime minister, told reporters that France would “build more social housing, better distributed throughout the territory in order to break with the logic of ghettos.” That promises to be a long process with an outcome as uncertain as the attempt to legislate away the seeds of extremist Islamism.