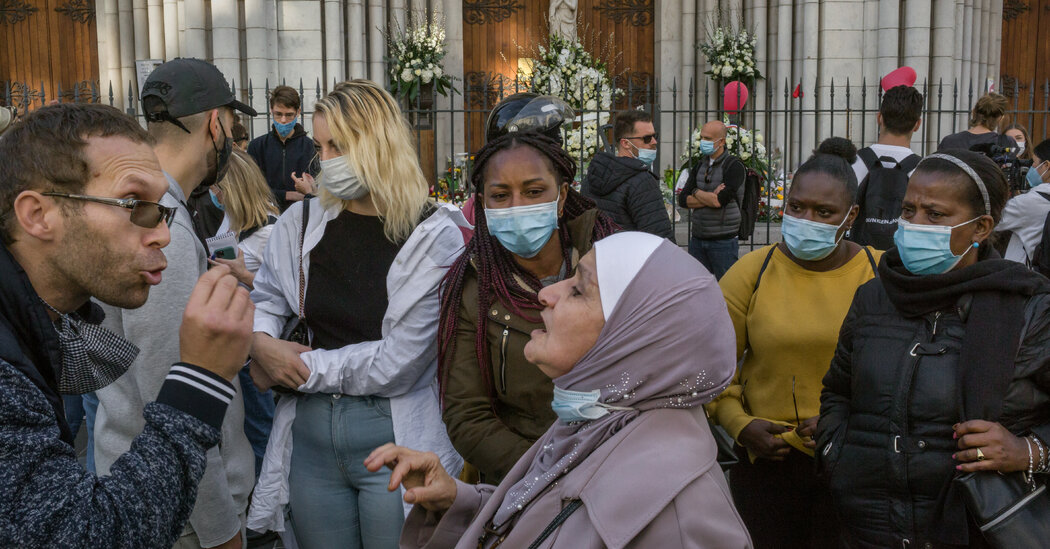 The men were suspected of being in contact with a knife-wielding assailant who killed three people at a church on Thursday, the French authorities said.

A spirited discussion about religion and politics in front of the Notre Dame basilica in Nice, France, on Friday, the day after an assailant carrying a knife entered the building and killed three people.Credit…Mauricio Lima for The New York Times

PARIS — The French authorities said on Friday that they had arrested two men suspected of being in contact with an assailant who killed three people at a church in Nice on Thursday, an attack that rattled the country and reignited fears of terrorism as officials blamed some foreign leaders for stoking hatred of France.

French judiciary officials provided no details on what connection the men, ages 47 and 35, had to the attack. French security forces routinely use a wide scope when arresting and questioning suspects’ family, friends and contacts after such an assault.

Gérald Darmanin, the interior minister, said that France faced a high-level threat of terrorism and was being “particularly targeted” because of what he called the country’s staunch defense of freedom of expression and secularism. The authorities placed the country on its highest terrorism threat level in the hours that followed the attack.

Debates about cartoons of the Prophet Muhammad have strained France’s relations with some Muslim-majority countries since the beheading of a teacher in a Paris suburb by a Muslim man this month.

In Thursday’s attack, a man entered the Notre-Dame basilica in Nice shortly after it opened in the morning and fatally attacked three people with a seven-inch knife. Two similar knives were found near his bag, which was left in the church.

The police confronted the assailant at the church while the attack was in progress, shooting and wounding him. The suspect, a Tunisian man in his early 20s who has not been identified, is still hospitalized.

It was not immediately clear how the additional men might be connected to the attack or what contacts he had with the main suspect, who was not known to the French police or intelligence services.

Mr. Darmanin, the interior minister, told RTL radio on Friday that the main suspect had arrived in Italy from Tunisia last month and then apparently traveled on to France hours or days before the attack.

The Italian authorities said that the suspect arrived on the island of Lampedusa on a small boat on Sept. 20 and was ordered to leave the country on Oct. 9, but that they had received no warning from the Tunisian authorities that he represented a threat.

Luciana Lamorgese, Italy’s interior minister, said at a news conference on Friday that most migrants who arrived in Italy this year were Tunisians — 11,195 people out of a total of 27,190. Tunisia’s economic crisis and the social unrest provoked by the pandemic have pushed a growing number of people to leave, she said.

One of the victims in Thursday’s attack, a 60-year-old woman, had her throat cut so deeply that it was akin to a decapitation, according to France’s top antiterrorism prosecutor.

Another victim, Vincent Loquès, a 55-year-old man who was the church’s sacristan, also had serious throat wounds. The third victim — a 44-year-old Brazilian woman living in France, according to the Brazilian authorities — escaped the basilica but died of her wounds shortly afterward. She was identified in the Brazilian media as Simone Barreto Silva.

Mr. Darmanin also said that he had warned the local security authorities around the country last Sunday of heightened security risks after a group close to Al Qaeda issued a statement calling for people to attack French targets, including churches and embassies.

In a separate attack on Thursday, a knife-wielding assailant wounded a security guard outside a French Consulate in Saudi Arabia.

The assault in Nice bore similarities to the recent killing of Samuel Paty, a 47-year-old schoolteacher, near Paris. He was decapitated by an 18-year-old Muslim man who was angered that Mr. Paty had shown cartoons of the Prophet Muhammad in class.

Since Mr. Paty’s killing, the French authorities have undertaken a broad crackdown against what they characterized as Islamist extremists in France, conducting dozens of raids, temporarily closing a major mosque and disbanding two groups that they accused of “advocating radical Islam” and hate speech.

In the aftermath of the attack, the response by French officials — especially President Emmanuel Macron’s vow that France would protect the right to caricature — has been denounced by some Muslim leaders. French officials have grown increasingly outraged over those verbal attacks.

Mr. Darmanin singled out some leaders for promoting “extremely strong calls to hatred” against France over the past few weeks, including “absolutely scandalous” comments by President Recep Tayyip Erdogan of Turkey, who has questioned Mr. Macron’s mental health.

On Thursday, in a tweet that was later removed, Mahathir Mohamad, a former prime minister of Malaysia, said that Muslims had a right to “kill millions of French people for the massacres of the past.”

Mr. Darmanin said: “We are at war, facing an enemy that is both an internal enemy and an external enemy. We are not at war against a religion, but against an ideology, the Islamist ideology.”

And Jean-Yves Le Drian, France’s foreign minister, said in Parliament on Thursday that France could not accept “disinformation and manipulation campaigns” against France by those who ”portray our commitment to fundamental freedoms as an attack on the freedom of worship.”

A portrait of Samuel Paty, the teacher beheaded in an attack in a Paris suburb this month.  Credit…Dmitry Kostyukov for The New York Times

The transition from “virtual hate to real violence” is a quick one, Mr. Le Drian said. But he also sent a “message of peace to the Muslim world.”

“France is not the country of contempt or rejection — it is the country of tolerance,” he said. “Don’t listen to voices that seek to stir up distrust. Muslim religion and culture are part of our French and European history.”

Bruno Le Maire, the economy minister, told France Inter radio on Friday that he disliked the use of caricatures of Islam’s prophet. “But I will be the first to defend those who made them and those who distribute them,” he said.

Nice, a city on the French Riviera near the Italian border, has been traumatized several times by terrorist attacks. In 2016, in one of France’s deadliest attacks, a Tunisian man killed 86 people when he drove a truck through crowds who had gathered in the city to watch Bastille Day fireworks.

Christian Estrosi, the city’s mayor, told Europe 1 radio on Friday that he felt angry after the attack and urged France to change its Constitution if needed to pass stringent antiterrorism laws.

Just as the French are forgoing certain freedoms because of the coronavirus pandemic — on Friday, the country entered a nationwide lockdown that will last at least a month — they should be willing to do the same to stop terrorism, Mr. Estrosi said.

Éric Ciotti, a lawmaker who represents the region that includes Nice, said that authorities needed to set up a “French-style Guantánamo” — a reference to the United States military base in Cuba where terrorism suspects are held — to detain people who are flagged by intelligence services as potential risks but haven’t been convicted of any crimes.

“Islam-facism is a virus,” Mr. Estrosi said. “We have permanent bombs on our territory that could explode at any moment.”