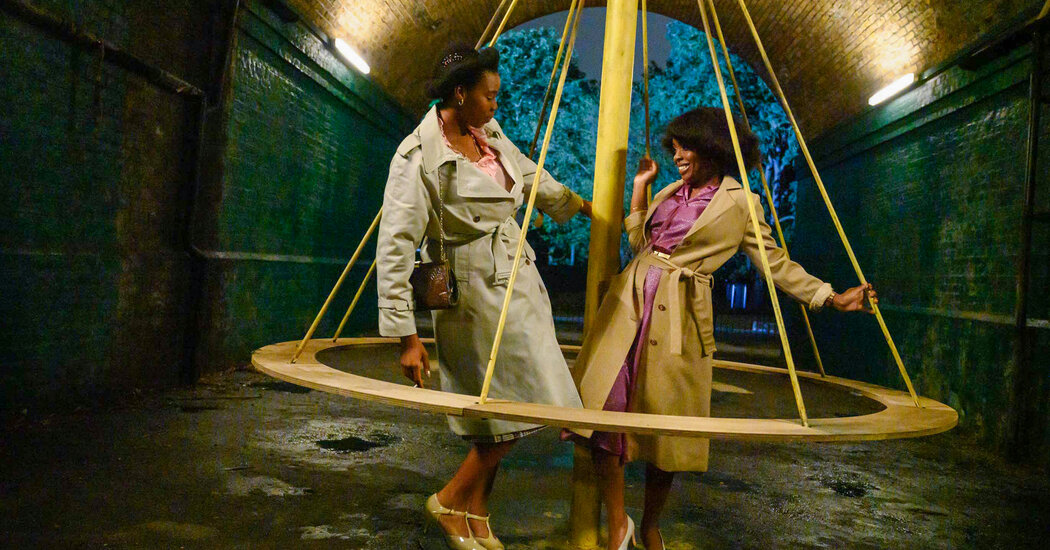 Steve McQueen’s new “Small Axe” anthology includes a film that centers on an offshoot of reggae that represented big shifts in the music, and in Black British culture.

The lovesick kiss-off “Silly Games” and its indelible high note play a pivotal part in “Lovers Rock,” one of five pieces in the director Steve McQueen’s new “Small Axe” anthology, which examines Black British life across the ’60s, ’70s and ’80s.

The film takes its name from the musical genre lovers rock, a softer, sentimental spin on reggae created and popularized in mid-70s England by the first generation of British citizens born to Caribbean immigrants and Caribbean-born immigrants who moved to Britain at a young age. “Lovers Rock,” which arrived on Amazon Prime Nov. 27, is a fictional story set in 1980 that follows a woman named Martha (Amarah-Jae St. Aubyn) as she attends a “blues party” (short for “rhythm and blues”), a nighttime gathering thrown by Black people denied entry into white-dominated clubs. Blues parties usually took place in houses belonging to members of the community, where D.J.s would guide the festivities on professional sound systems.

As McQueen’s characters come together, they’re backlit by artists like Janet Kay, Dennis Brown and Gregory Isaacs, who set the stage for young love to freely sprout. Kay’s “Silly Games,” which reached No. 2 on the British singles chart, “had to be the heartbeat of the party,” McQueen said, “because it has so many meanings — the yearning, and the vulnerability of the singer. That’s the bravest thing you could possibly do, falling in love, because you’re opening yourself to hurt.”

Recreating a 1980s house party involved extensive research, partly informed by McQueen and his co-writer Courttia Newland’s memories. McQueen, born in 1969, was occasionally brought to the events as a child, once falling asleep and “waking up with all these coats on me.” Those memories constituted a lodestone of evidence during the research process. “I remember, for example, the sweat dripping down the walls,” he said in an interview. “Things like the carpet in a West Indian front room, the clothes, and so forth.”

On top of all that, “the music was the scent in the air which changed everything,” he explained.

Lovers rock represented a major shift. “Pre-lovers rock, it was predominantly a male dance floor — it was cool for a guy to dance on his own or with other guys,” said Mykaell Riley, a senior lecturer and director for the Black Music Research Unit at the University of Westminster, who consulted on the film. By spotlighting female vocalists, who sang about romantic concerns rather than the politics inherent to traditional roots reggae, lovers rock musicians and D.J.s were able to fundamentally alter the trajectory of the night.

According to Dennis Bovell, the lovers rock pioneer who wrote “Silly Games” and also consulted on McQueen’s project, changing this gender dynamic was something like a mission statement for the nascent genre. “We wanted to bring the girls to the front, and make them the stars,” he said.

“Silly Games” is first heard in the opening minutes of “Lovers Rock,” sung by a group of women cooking food for the party. Later on, when the night has reached its romantic crescendo, it’s played in full by the D.J.s, and then sung a cappella by the entire room in an ecstatic sequence lasting 10 minutes that wasn’t scripted to carry on that long, but unfolded naturally during the filming.

Beyond the historical significance of songs like “Silly Games,” McQueen and his team also endeavored to make the soundtrack period accurate, rather than a well-curated anachronistic pastiche.

“A guiding principle was to not just get into crate digging territory, because at the end of the day it’s a community party,” said Ed Bailie, a music supervisor who worked on “Small Axe,” adding that they looked for tracks that would “make people who are in the garden go into the living room.” A relatively light moment takes place early on in the night, when the D.J. transitions from the disco group Sister Sledge to Carl Douglas’s novelty single “Kung Fu Fighting,” prompting Martha and the other partygoers to pantomime martial arts action as they dance.

Securing legal permission to use some of these songs wasn’t easy. Many of the original labels that hosted the kind of music heard in the film have since shut down or been folded into a winding maze of corporate parents and their subsidiaries, requiring the filmmakers to be flexible about what would make it into the final product.

For example, getting the rights to Cry Tuff and the Originals’ skeletal dub track “Robin Hood,” which is used to test the sound system before the party begins, required a fact-finding mission. Searching for the owner led Bailie’s team to the estate of Prince Far I, the Jamaican musician who occasionally recorded under the Cry Tuff pseudonym, and who died in 1983. After prolonged communication, including plenty of “late night calls with the clearance team at BBC,” Bailie said, the proper contracts were sent along and signed over smartphones.

The diversity of music mirrors the film’s arc, with the playlist transitioning from poppy crowd pleasers to dreamy ballads to, near the end, a predominantly male dance floor exuberantly cutting loose to murky dub cuts by the Revolutionaries and Augustus Pablo. That reflected reality, too, as there would come a point in the night when the couples had paired off, leaving the male stragglers to reclaim the dance floor. “It was warrior-like, because you could be the person you wanted to be,” McQueen said.

Micheal Ward and St. Aubyn in “Lovers Rock,” which centers around a party where the music is key.Credit…Parisa Taghizedeh/Amazon Prime Video

These spaces reflected then-ongoing debates within the Black British community. Bovell said that in the genre’s early days, a lovers rock singer’s background might be intentionally obscured in order to avoid accusations they were less legitimate than native Jamaican singers. “There’s an identity crisis which is, ‘Am I more Jamaican? Or am I more British? Am I British-Jamaican?’” Riley said, pointing out that the authenticity of lovers rock, which he called the “first Black British genre in response to Jamaican popular music,” was questioned along the same lines. “It carried an element of pop that was very different from roots reggae. But it held its own, and this is what was genius about it.”

Bovell described a defiance that came with the genre’s birth. “When we came to look at making reggae in London and to give it a London identity, we were struggling against all the doubters that said, ‘You can’t beat reggae outside of Jamaica,’” he said. “You bet we can. And we’re going to do it here and show it to you.”

One of the joys of McQueen’s film is how it gestures at these ideas within the conceit of one magical night, where young love takes root amid such greater tensions. For Bovell, who cameos in the film as a lodger in the house where the party takes place, and whose low voice can be heard during the “Silly Games” sequence, the experience of filming was like stepping into a time machine. “It was so real to be in that room,” he said. “I was thrown back 40 years.”

McQueen said that even with all the research that went into the episode, the alchemy of the final product is something he couldn’t have planned for. “You cram everything into a room to get the closest you possibly can,” he said. “But that one thing you cannot manage happened. I don’t know why.” A moment later, he corrected himself: “You know why it happened? Because we wanted it to happen.”

As virus cases rise across the U.S., records topple.

‘It was a feeling of terror: when will the water stop?’: Britain’s flood victims, six months on

‘Us’ Offers Marital Angst and a Trip to Europe