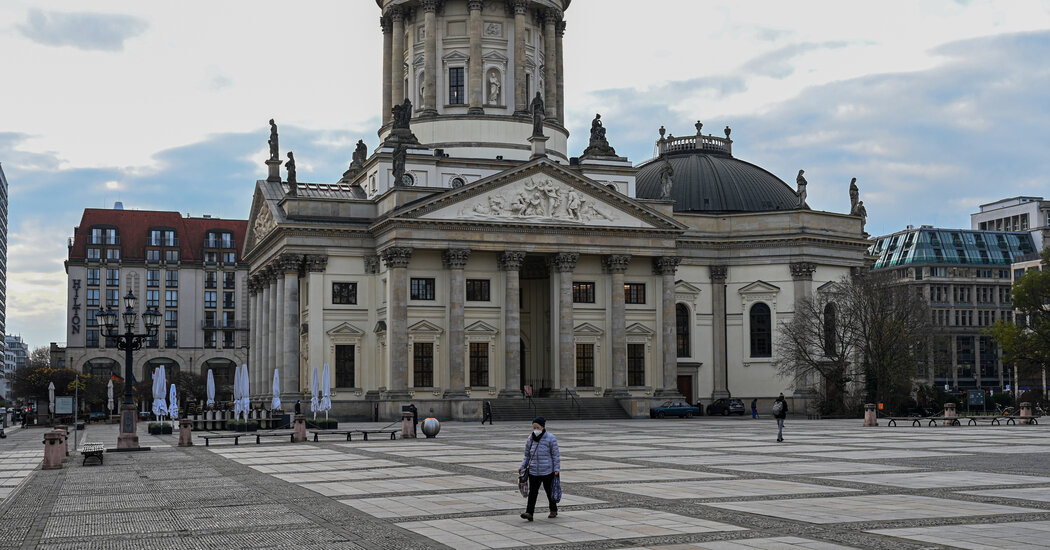 We’re covering rising numbers of cases of the coronavirus in Germany, the prospect of a Facebook breakup and the nearly 50,000 displaced Ethiopians.

Chancellor Angela Merkel of Germany on Wednesday pleaded with Germans to meet fewer people and stay home over the holidays because of the pandemic. “From the bottom of my heart, I am really sorry,” she said. “But if the price we pay is 590 deaths a day, then I have to say this is not acceptable.”

Germany is experiencing a record number of deaths from the coronavirus, with as many people dying from the virus in the first seven days of December as died in traffic accidents across the country in all of 2019.

Germany emerged from the first wave of the virus with relatively few fatalities and enough intensive care beds to take on patients from neighboring countries. But the number of cases has risen after governors of the country’s 16 states last month agreed only to partial restrictions that left most stores and schools open, against Ms. Merkel’s wishes.

Mark Zuckerberg spoke to members of Congress in July.Credit…Pool photo by Graeme Jennings

After more than 18 months of investigation, federal regulators and more than 40 U.S. states accused Facebook of illegally stifling competition by buying up rivals like Instagram and WhatsApp. Prosecutors called for Facebook to break off those two services — and for new restrictions on future deals.

The lawsuits are the latest sign that regulators are becoming more aggressive about fighting corporate concentration, after decades of largely accepting it.

Official remarks: “Facebook has used its dominance and monopoly power to crush smaller rivals and snuff out competition, all at the expense of everyday users,” said Attorney General Letitia James of New York.

Response: A spokeswoman for Facebook said the Federal Trade Commission had cleared these acquisitions years ago. The company has argued in the past that the market for social media remained competitive, pointing to the growth of TikTok and Parler as examples.

Nearly 50,000 Ethiopians fleeing the region of Tigray have sought safety across the border in Sudan, in what the United Nations has called the worst exodus of refugees Ethiopia has seen in more than two decades.

Tigrayans gave accounts to Times journalists of a devastating conflict in Tigray, characterized by looting, ethnic antagonism and killings. These painful descriptions are at stark odds with the repeated claims from Ethiopia’s prime minister, Abiy Ahmed, that no civilians are being hurt.

Worrying prospects: Fighting in Tigray is degenerating into a guerrilla war that could unravel both Ethiopia’s national fabric and the stability of the entire Horn of Africa region, including Eritrea and Sudan.

If you have 12 minutes, this is worth it

In the U.S., where regulators have been frustrated with AstraZeneca’s approach to releasing data, approval for the vaccine hangs in the balance, potentially putting the lives of thousands of Americans at risk.

Our reporters pieced together the series of communication errors and delayed trials that led to the drugmaker’s diminished credibility with U.S. regulators.

Brexit trade deal: Despite a dinner meeting between Prime Minister Boris Johnson of Britain and the president of the European Commission, Britain and the E.U. failed to break the deadlock in critical negotiations, which have a new deadline of Sunday. Without a deal on Britain’s leaving the E.U. economic area, British ports face huge backlogs and a mountain of customs declarations.

Religious extremism: After three terror attacks in recent months, the French government on Wednesday unveiled a draft bill that aims to combat radical Islamism. The law has already been called “heavy-handed” by the U.S. envoy on international religious freedom.

Iran nuclear: New satellite images show that Iran is building a key part of its nuclear facility underground in mountains about 140 miles south of Tehran to protect it from possible attack, according to analysis from The Times’s visual investigations team.

Cuban protests: Hundreds of artists and other young Cubans gathered in the country’s largest protest in decades, after seeing videos of police detentions circulated online, and in a rare instance of Cubans openly confronting their government.

Snapshot: Above, a cache of 63 gold coins from the reign of Henry VIII — uncovered by a family who were weeding their yard in April — is among the more than 47,000 archaeological finds reported in England and Wales this year.

Pantone’s colors of the year: Get ready for Ultimate Gray and Illuminating. Or, in normal-speak: the light at the end of the tunnel, with a vibrant lemon-yellow bursting forth from dismal gray. Together, a Pantone executive said, “the color combination presses us forward.”

Lives lived: Guido Goldman, a philanthropist and Renaissance man who used his vast wealth and extensive network of friendships in politics and the arts to help rebuild America’s relationship with Germany after World War II, died last month at 83.

What we’re reading: This New Republic article on a biography about the author of the children’s book “Harriet the Spy,” a favorite of Amelia Nierenberg, who writes our Coronavirus Schools briefing. She adds, “The piece on Louise Fitzhugh offers insight into the swirling Cold War politics and queer counterculture behind Harriet’s secrecy.”

Cook: Yerushalmi kugel is a peppery, sweet-savory kugel that’s a specialty of Jerusalem and a perfect fit for any Hanukkah table.

Reflect: Can you name one good thing about 2020? We’re asking readers to contribute their submissions on spots of light in a somber year.

Do: Here’s how stress affects your skin, and some tips on minimizing its toll.

Let us help you unwind with our At Home collection of ideas on what to read, cook, watch and do while staying safe at home.

The Times gathered a group of doctors, medical scholars and health care executives to discuss the arrival of coronavirus vaccines and how battered American institutions should prepare for the next pandemic while repairing the damage wrought by this one. Here’s what they had to say.

An effective vaccine will be a huge breakthrough for society and the economy. It would also be a staggering scientific achievement.

Gregory Poland of the Mayo Clinic, who is also editor in chief of the journal Vaccine, described the vaccine “as nothing short of dizzying.”

“We were all prepared to see something like 50 to 70 percent efficacy, something like that. And to be in excess of 90 percent, 95 percent, puts it on par with the best vaccines that have ever been developed — and with apparent acceptable short-term safety. I think this is really going to have a profound effect on the field of vaccinology. I hate to overuse the word ‘paradigm-breaking,’ but it is, in many ways.”

To get back to normal more quickly, the most vulnerable should be vaccinated first.

“The only certain way, given what we know about the vaccine now, to get society back to being able to function is to have this be a less-severe disease,” said Marc Lipsitch, from the Harvard T.H. Chan School of Public Health. He added, “The way you do that is to make the people in whom it’s severe no longer vulnerable.”

With public health education, the messenger is at least as important as the message.

Though communities of color have disproportionately borne the brunt of coronavirus cases in the United States, many in those communities are particularly wary of receiving the vaccine.

To change that, says James Hildreth, the president of Meharry Medical College, a historically Black medical school in Nashville, the message had to come from the right person. “We identified trusted messengers in those communities,” he said. “We empowered them with the information they needed. They needed to believe it first — and accept it first — and they were the ones that delivered the messages that turned out to be quite effective.”

That’s all for today. See you on Friday.

P.S.
• We’re listening to “The Daily.” Our latest episode is about the vaccine drive in Britain.
• Here’s our Mini Crossword, and a clue: Move like a dreidel (four letters). You can find all our puzzles here.
• The word “percontation,” a 16th-century punctuation mark that failed to gain traction, first appeared in The Times on Wednesday, according to the Twitter bot @NYT_first_said.
• Mihir Zaveri, a reporter currently on the Express Desk, is joining Metro full time to cover New York City.

The White House accused China of hindering a W.H.O. inquiry into the origins of the virus.