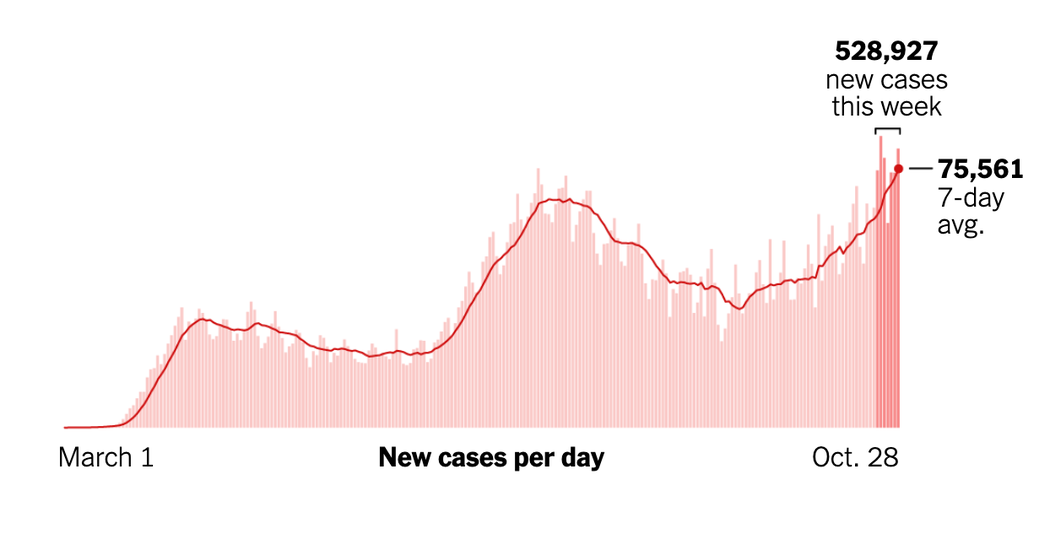 The U.S. recorded more than 500,000 new cases and counted its nine millionth case.

The United States just had its worst week ever for the virus.

Over the past seven days, the country recorded more than 500,000 new cases and counted its nine millionth case since the start of the pandemic. Yesterday, at least 90,000 new cases were logged — an all-time high and the equivalent of more than one case per second — and there is no end in sight to the latest surge.

Unlike past peaks, where a few areas drove up case numbers, this time the virus has gripped nearly every corner of the country, including many areas that avoided surges of the past.

Colorado counted 2,000 new cases, Illinois logged 6,400, and more than 1,000 were found in New Mexico — all record daily highs for those states. Over the past week, 24 states added more cases than in any other seven-day stretch of the pandemic, while new cases are increasing in 42 states.

If we look at a better indicator of the strength of the latest surge — hospitalizations — the situation appears equally severe. Hospitalization data, collected by the Covid Tracking Project, shows that the number of people hospitalized with the coronavirus reached record highs in almost half of states in recent weeks. Over the past month, hospitalizations have surged by 46 percent.

The death rate remains lower than it was at its peak, averaging around 800 deaths per day. But as we’ve seen in past waves, deaths can lag cases and hospitalizations by several weeks. Even if a surge in deaths doesn’t materialize, the death rate also plateaued over the past month and has not dropped as much as experts had hoped after the summer surge.

Unlike in the spring, when the virus was deadliest where Democrats live, the new surge includes Republican-dominated sections of the Great Plains and the Mountain West. And in the battleground states, a growing share of cases is emerging in counties that supported Mr. Trump in 2016.

Election Day next week will be unusual in many ways, but it’s not the first time the country will vote during a pandemic. During the midterm elections of 1918, cases also surged in October. Campaigning in person was restricted, as were speeches and rallies. Voter turnout was low and those who cast ballots voted for change, flipping both chambers of Congress in favor of the Republican Party.

Here’s a roundup of restrictions in all 50 states.

We’re both what you’d label “busy New Yorkers.” Too hurried to bother about breakfast; catching the train on time is way more important. But it’s been over six months of us organically developing a morning routine as a couple — taking turns brewing coffee, making breakfast, reading the news to each other. I still have to leave for work while my partner stays behind working from home, but our slower mornings are the highlight of my day. I go to bed each workday looking forward to them.

Let us know how you’re dealing with the pandemic. Send us a response here, and we may feature it in an upcoming newsletter.

Sign up here to get the briefing by email.

Email your thoughts to briefing@nytimes.com.

As virus cases rise across the U.S., records topple.