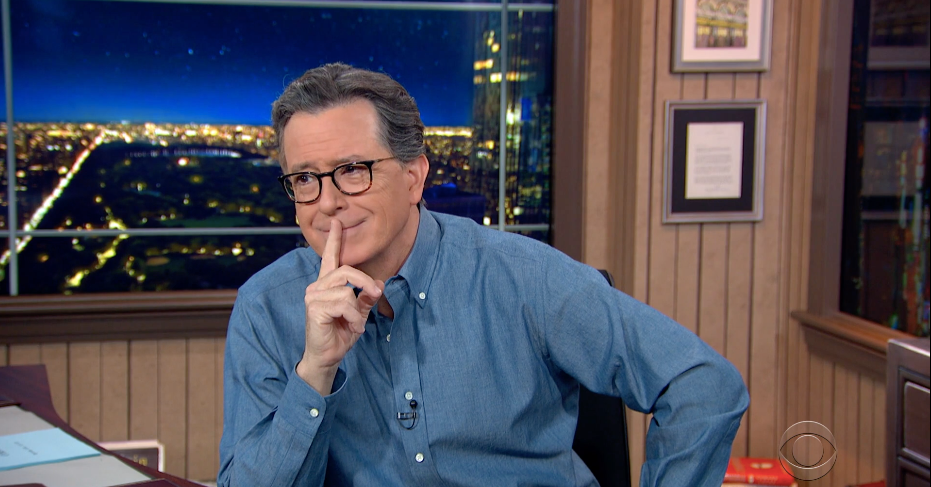 Barr said the Justice Department had not found voter fraud on a scale that could change election results. “Fraud on a scale — also known as the president’s annual physical,” Colbert joked Tuesday.

Stephen Colbert and his late-night peers poked fun at William Barr’s turning his back on President Trump.Credit…CBS

On Tuesday, Attorney General William P. Barr shot down President Trump’s assertion of widespread voter fraud, acknowledging that the Justice Department had uncovered no wrongdoing “on a scale that could have effected a different outcome in the election.”

“Fraud on a scale — also known as the president’s annual physical,” Stephen Colbert joked on “The Late Show.”

“It’s so weird that they didn’t find evidence of the very thing they never backed up with any evidence.” — JAMES CORDEN

“Oh, man. If Bill Barr had a neck, Trump would totally be wringing it right now.” — JIMMY KIMMEL

“He will be missed.” — STEPHEN COLBERT

“William Barr has been one of Trump’s most obnoxiously loyal allies throughout — emphasis on ‘lies’ in allies. This would be like if Thelma turned on Louise.” — JIMMY KIMMEL

“At this point, Trump’s lost ‘Fox News,’ Republican senators and now Bill Barr. Today he was like, ‘If Randy Quaid jumps ship, it’s over.’” — JIMMY FALLON

“That is cold. Sending the president of the United States to voice mail like he’s spam? Which he is, but still.” — TREVOR NOAH, on Gov. Doug Ducey ignoring Trump’s call as he was certifying Arizona’s election on Monday

“The president called him while he was signing, and the government sent him straight to voice mail. That is a guy who’s picked up that phone once too often: ‘Yes, Mr. President, you told me. Massive dumps. Right. Listen, I gotta go. Arizona is going through a tunnel. Chhhhhhh.” — STEPHEN COLBERT

“You know ‘Fox & Friends’ were watching this like, ‘Oh, that’s a good trick — we can just not answer the phone. We’ve gotta try that.’” — TREVOR NOAH

“I believe the young people call that ‘ghosting.’” — JIMMY KIMMEL

“You know what makes this move especially gangster is that he knew Trump was watching him on live TV. We’ve all had the moment where we think somebody’s ignoring our call or our text, but to actually see it — to see him look at his phone, see your name and then put it away? Ooh, that had to hurt.” — TREVOR NOAH

Rosie Perez talked about her experience contracting the coronavirus while shooting her new film, “The Flight Attendant,” in Bangkok.

Kate Winslet will talk about her new film, “Ammonite,” on Wednesday’s “The Late Show.”

Image The Kinks’ “Lola Versus Powerman and the Moneygoround, Part One,” the album that contained the group’s enduring hit “Lola,” turned 50 this year.Credit…Jack Robinson/Hulton Archive, via Getty ImagesContinue reading the main story

Mary Ahern, Who Produced Early TV and Then Preserved It, Dies at 98