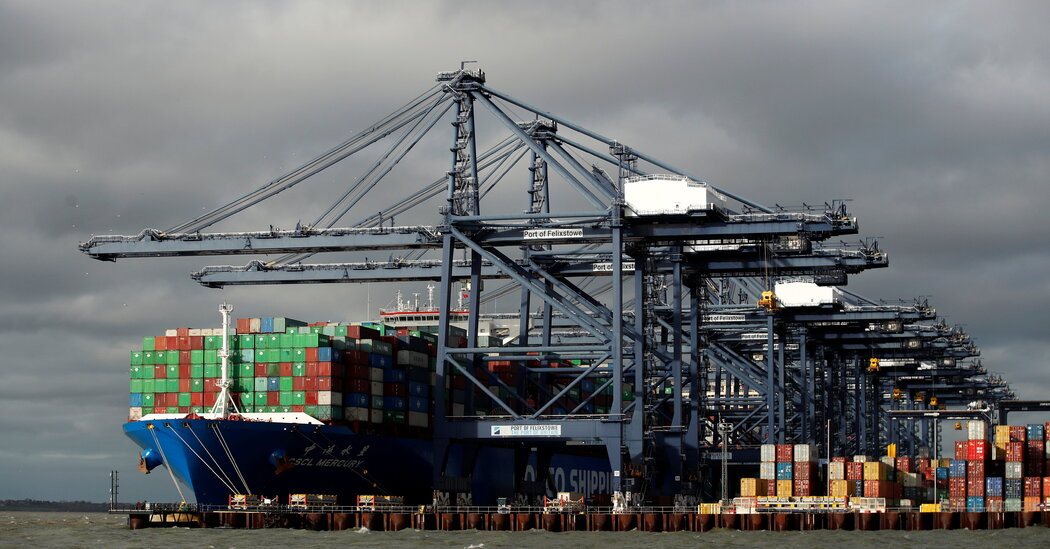 Honda’s plant in England was forced to halt operations because its parts hadn’t arrived. Soon U.K. ports will face a mountain of customs declarations.

LONDON — With just 23 days until Britain’s exit from the European Union truly begins, the country got a taste of the havoc that trade disruption could bring. Honda shut down production on Wednesday at its biggest plant in Europe, where more than 3,000 people assemble Civics, showcasing the severity of the congestion and delays that have gripped Britain’s ports.

The 370-acre Honda factory in Swindon, about 80 miles west of London, operates a “just in time” manufacturing supply chain, with goods arriving and going straight onto the production line to avoid large and costly storage facilities.

Production was halted “due to transport-related parts delays,” the Japanese automaker said Wednesday, and would resume “as soon as possible.” On Thursday, it said the plant would remain closed for the rest of the week. “The situation is currently being monitored with a view to restart production on Monday,” Honda said in a statement.

Shipping problems have been building for weeks and have been particularly acute at Felixstowe, Britain’s largest deep-sea port, on England’s east coast. It handles about 40 percent of the country’s container trade, involving goods mostly coming from Asia.

Shipments of personal protective equipment have been clogging up the port, causing delays compounded by efforts by retailers and manufacturers to import more goods for the Christmas shopping rush. Other businesses are bringing in items before the end of the Brexit transition period on Dec. 31, when customs checks with the European Union are expected to cause even more delays. Bad weather in Southampton, a large port in the south, is also creating backups.

“It really is a perfect storm,” said Peter Ward, the head of the U.K. Warehousing Association. He said storage facilities were also running at full capacity.

The delays have led to reports of price increases, and ships being diverted to Rotterdam in the Netherlands or other British ports such as Liverpool.

The pandemic has caused problems for shipping ports around the world. When China shut down at the start of the year to combat the spread of coronavirus, global trade slowed down. By the time Chinese manufacturing restarted, Europe was in lockdown. Shipping containers of goods arrived with nowhere to go. There were also fewer sailings, so empty containers weren’t getting back to China.

“That is still working itself out,” said Alex Veitch, the general manager of public policy at Logistics U.K., a trade group.

Aggravating the problem in Britain has been a large shipment of medical masks, gowns, gloves and other equipment ordered for the National Health Service and, temporarily, left at Felixstowe in storage. At the end of November, the port operator said it was working with the government to clear the mountain of shipping containers, some of which were moved to former airfields. The port had also hired staff and expanded its opening hours to unblock the congestion.

Felixstowe had drawn complaints before the pandemic. It is one of the least efficient major market container ports in the world, according to data from IHS Markit. It has struggled to deal with growing international trade and larger ships carrying more containers. It takes twice as long to move a container on or off a ship in Felixstowe as it does in some of China’s busiest ports, IHS Markit data shows.

Because Felixstowe and other deep-sea ports mostly handle trade from Asia, these delays aren’t the same as what is expected to come in the new year, when Britain breaks away from its largest trading partner.

The government has been warning businesses to prepare, but trade groups say some companies have been too busy dealing with the fallout from the pandemic. Mr. Ward said importers and exporters were less prepared, though warehouses and transport operators have done what they can.

The crunch point is likely to be on the south coast, in Dover or Folkestone, the busiest places for the transport of goods between Britain and the European Union, either on trucks carried across the English Channel on ferries or on trains through the channel tunnel.

“The roll-on, roll-off at the Eurotunnel movement of goods is unique to the U.K., Ireland and Northern Europe,” Mr. Veitch said. It’s a huge business, he said, that’s built on the ability of someone to drive goods to and from Britain from mainland Europe “as if you were driving to the next town.”

Honda shut down production at its British plant after parts were hung up by congestion at shipping ports.Credit…Ben Stansall/Agence France-Presse — Getty Images

But a report by Britain’s National Audit Office last month found that the country was still unprepared for the changes. Britain’s tax agency would need to process 270 million customs declarations beginning next year — nearly five times current levels — but still must develop software to do so. Last month, the Bank of England said it believed exporters representing about 70 percent of goods sent to the bloc were prepared for the customs and documentation checks. In the first quarter of 2021, fewer exports and disruption to supply chains will cut economic growth by 1 percentage point, the central bank projected.

“There will be delays in January for sure,” Mr. Veitch said. “There’s too much to do and not enough time to do it.”

The British government said it would wait six months before imposing some customs checks on incoming shipments; but on the French side, they will begin right away. Last month, French border police tested post-Brexit immigration procedures by checking documents of trucks crossing from Britain into France. It led to a five-mile traffic jam in Kent, in southern England, up to the entrance of the Eurotunnel.

Honda is already looking beyond British ports. It announced this year that it would close its Swindon plant, where it has built vehicles for three decades, next July. The automaker blamed global changes in the demand for cars and the need to manufacture more electric vehicles. But in 2017, Honda delivered a warning about Brexit’s effect on its supply chains, telling a parliamentary committee that just 15 minutes of delays to trucks clearing customs at Dover would be compounded into nearly 1 million pounds in additional costs a year.