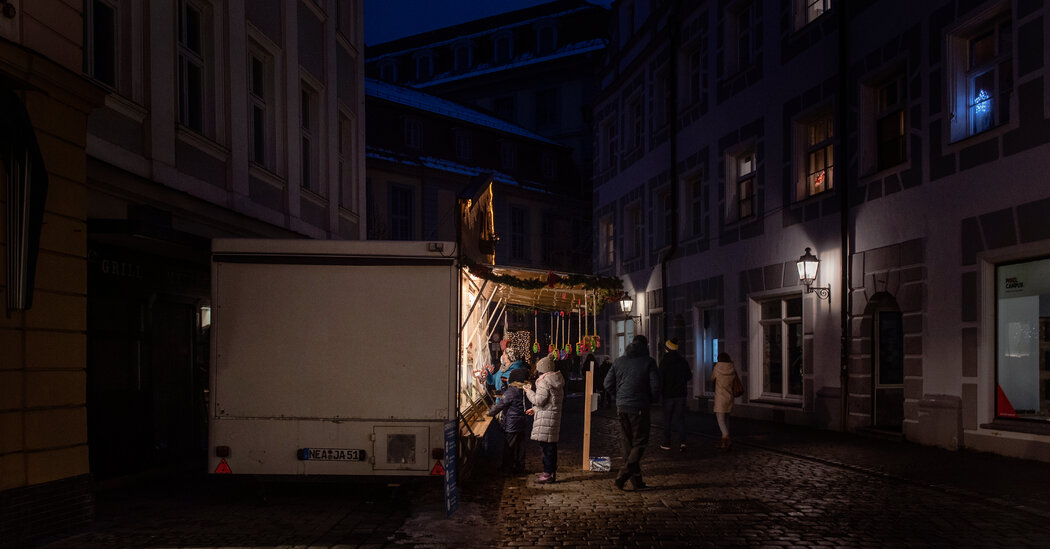 Across the country, city and town squares stand empty of the usual huts, sounds, scents and lights, as the coronavirus has forced the country to skip its beloved annual Christmas markets.

The town of Ansbach in Bavaria allowed only a few of the usual Christmas market stands to open.Credit…Laetitia Vancon for The New York Times

There are no groups of friends gripping mugs of steaming red wine spiced with cinnamon and cloves crowding Rothenburg’s medieval market square, or beneath Cologne’s towering cathedral. No brass bands play carols before Berlin’s Charlottenburg Palace. No stars shine from the eaves of Seiffen’s wooden huts.

The magical figure known as the Christkind did not spread her golden wings and welcome the world to Nuremberg’s annual Christmas market. The darkened city square did not spring to light, revealing, in the verse she recites annually, a “little town within the city, which of cloth and wood is made; fleeting in its brief splendor, but everlasting throughout the ages.”

The coronavirus is muting Christmas celebrations around the world. But the absence of seasonal merriment and public cheer is particularly palpable, and painful, in Germany’s marketplaces and squares, largely devoid of their beloved Christmas markets because of the pandemic.

“When you walk through the streets of Munich or Nuremberg these days, without the bright lights and good cheer, without the smell of hot mulled wine — I just miss all of that,” said Oliver Pötzsch, 50, an author whose novels draw from his Bavarian family’s history.

Germans have gathered at outdoor markets in the weeks before Christmas since the 14th century, when vendors first built their stands in city centers to sell their wares to people coming from church services. They offer an array of foods, artisanal gifts and other provisions for the coming celebrations and the long winter months.

Tourists from across the globe throng the half-dozen markets — often fashioned on different themes, like a Scandinavian or sustainable Christmas — in major cities like Berlin, Cologne and Munich.

The locals, though, are drawn to the more intimate festivals in towns and villages across the country, often in the regions where they grew up.

“They were always meeting places,” Margot Kässmann, 63, a former bishop of the Lutheran Church in Germany said of the Christmas markets, also called Advent markets.

“Today, Christmas markets remain very social places where friends and family gather,” she said. “But even people who are alone will go there on their own to take in the smells, the lights and the music, which have something comforting about them.”

Germany’s roughly 3,000 Christmas markets are also an important economic boon to many communities, bringing in nearly $3.5 billion last year, according to the German Association of Fairground Employees. Local restaurants, breweries, bakeries and artisans also depend on the annual holiday fairs for a substantial amount of their income.

Nina Engel has been selling glass ornaments at the Christmas market in Berlin’s Gendarmenmarkt for years. But as December drew near and the country’s number of new coronavirus infections remained dangerously high, the German capital joined cities across the country that have canceled their markets, despite pledges made earlier in the year to do everything to keep them open.

An almost empty Gendarmenmarkt in Berlin this month.Credit…Lena Mucha for The New York Times

The Gendarmenmarkt, an elegant square, stands open to the cold this year. No music-lovers spill from the steps of the Konzerthaus into a temporary village of white tents, glowing with golden stars atop their peaks and warmed with laughter, sizzling sausages and a glittering array of crafts and gifts.

This year, the city allowed a small fraction of the vendors to set up pop-up stands on street corners or in empty squares, in an effort to recoup some of their costs and spread the Christmas spirit.

“We have to pay for everything up front,” Ms. Engel said, gesturing to rows of sparkling glass hummingbirds, pickles, pizza slices, Santas and snowmen, hung among silver, gold and red bulbs at her stand on the pedestrian zone of the Friedrichstrasse shopping street in Berlin. “This is all seasonal merchandise. We are here to try to sell at least a few items — it’s better than nothing.”

Other cities have also allowed a few stands to open, to aid vendors and maintain a modicum of Christmas cheer — but at a distance compliant with regulations that require strangers to keep six feet apart. Local restaurant owners are offering hot mulled wine, or Glühwein, from the steps of their shuttered eateries for patrons seeking a sip of the ubiquitous seasonal drink that doubles as a hand-warmer, as long as your mug is full.

Restaurants and bars selling mulled wine to go during the partial lockdown in Berlin’s Prenzlauer Berg neighborhood.Credit…Lena Mucha for The New York Times

Others are trying to recreate that Christmas market feeling at home, going all-out with windows outlined in colored lights, blinking snowmen and giant, glowing Santa Clauses — displays that many Germans only know from Coca-Cola commercials and Hollywood movies.

“I’ve noticed people are decking out their houses with terrible American-style lights, and Santa Claus hanging from their balconies,” said Mr. Pötzsch, who bought an outdoor heater, extra blankets and a string of “understated” lights to make a festive place for socially distanced meetings on his terrace.

And in a year that has witnessed concerts, plays and school classes moving online, organizers of some Christmas markets have tried to recreate the spirit virtually.

Seiffen, home to the carvers of Germany’s wooden ornaments, candle pyramids and toys, created a virtual Christmas market, complete with jingly music, images of an evening sky flecked with snow and 360-degree graphics, all to promote local vendors whose crafts would ordinarily be offered at markets across the country.

In Nuremberg, Benigna Munsi, 18, is serving her second year as the Christkind — who, in the local tradition, takes the form of a young woman with long blond curls, a towering crown and winglike golden sleeves. She is the city’s holiday ambassador and patron of its Christmas market.

For Ms. Munsi, the first weeks of December would usually be packed with visits to local hospitals, homeless shelters and nursing homes, and with hours spent greeting visitors at the market or reading stories to the children who come there.

Preparing stalls in Berlin.Credit…Lena Mucha for The New York Times

“Wherever I go as the Christkind, people are waiting for me,” she said in an telephone interview. “Whether they are young or old, they are always so happy when I enter the room. I’m sad that I can’t be there for people in person this year.”

She makes a daily appearance in a prerecorded online Advent calendar instead and, twice a week, she takes phone calls from anyone wishing to reach out to the Christkind. Most of the callers are children who bring her their Christmas wish lists, but adults reach out to her, too, many with memories to share.

“Since we are not meeting in person, I think that maybe memories are taking on a new meaning, becoming more valuable,” Ms. Munsi said.

She recounted how one woman had called to thank her for a gesture last year when, on a tour of the market as the Christkind, she had noticed the woman crying and stopped to ask if she was OK.

“She told me that meant so much to her, that she often thought back to the encounter when she was down and it gave her strength throughout the year,” Ms. Munsi said.

She has been encouraging people to reach out to family and friends they can’t visit with a letter or call — and to remember the spirit of Christmas does not live in the market but in the people who would usually gather there.

“Don’t let things get you down and don’t give up,” Ms. Munsi said. Even in a world weary of coronavirus and seemingly endless lockdowns, she said, “Something beautiful can always be found.”

Ex-President Sarkozy Gets Jail Sentence for Corruption in France