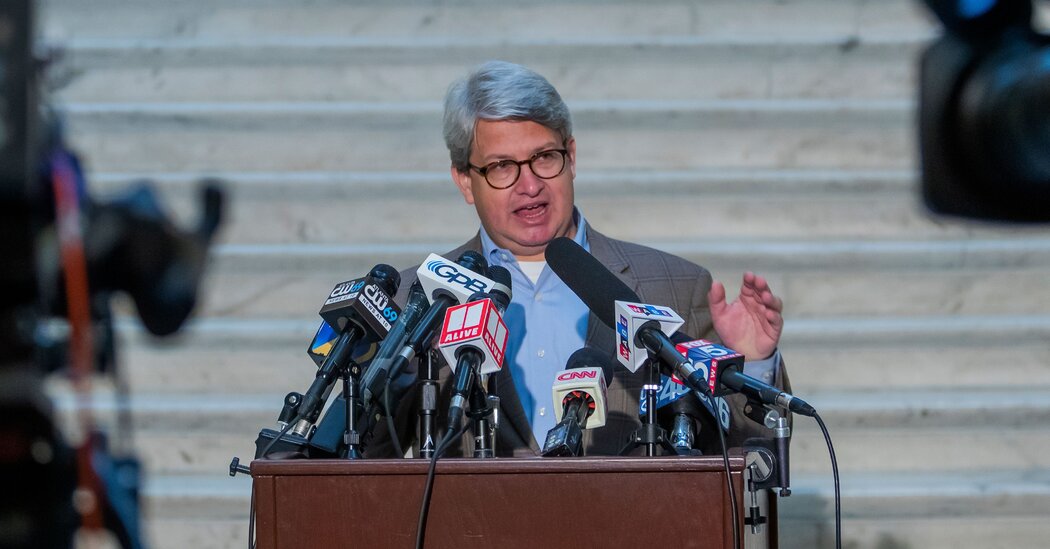 Gabriel Sterling, the voting implementation manager in the Georgia Secretary of State’s office, speaking to reporters in Atlanta.Credit…Erik S. Lesser/EPA, via Shutterstock

Late on Nov. 3, election workers in Fulton County, Georgia, heard that they would be allowed to go home for the night. So they packed uncounted ballots into suitcases and prepared to lock up for the evening.

When word came that they couldn’t leave yet, they dragged the suitcases back out and began counting the ballots again.

That singular scene — of workers taking out suitcases of votes — was then selectively edited and shared by allies of President Trump as a conspiracy theory that election workers had dragged out fraudulent ballots under the cover of night. According to the theory, those suitcases helped swing Georgia’s Electoral College votes to President-elect Joseph R. Biden Jr.

But on Monday, Georgia’s secretary of state office dedicated part of a morning news conference to debunking that falsehood and many others, in what was called “Disinformation Monday.” Gabriel Sterling, the voting implementation manager in Georgia and a Republican, said in the news conference that watching the entire surveillance footage of Election Day showed that workers had first packed the suitcases with valid, uncounted ballots and then later unpacked those same ballots. They had not taken out suitcases full of fake ballots, he said.

“The reason they were packed away is because they were under the misbegotten impression that they were getting to go home, which, if you notice when you go back to see the videos on this, they were packing these things up 10, 10:30 at night,” Mr. Sterling said.

He ran through a list of other pieces of misinformation being spread about the Georgia elections and rebuked the baseless claims. Conspiracy theories have been running rampant in the state, which also will hold runoff elections for its two Senate seats on Jan. 5.

About the rumor that a “water main break” had damaged ballots and the tally in Fulton County on Election Day, Mr. Sterling said, “There was no water main break.” He cited surveillance footage that showed that there was simply a water leak and that it did not affect any ballots.

Mr. Sterling criticized Mr. Trump and his allies for sharing a clip of the water leak incident and making it appear to show something else that was false and deceptive.

“What’s really frustrating is the president’s attorneys had this same videotape,” he said. “They saw the exact same things the rest of us see, and they chose to mislead state senators and the public about what was on that video.”

On false claims that workers had fed the same ballot multiple times into voting machines on Election Day, Mr. Sterling also said that that could not happen because “it would have shown up in the hand count.” Georgia election officials undertook a complete hand recount of the results after the election ended because of the closeness of the race. When the recount showed no change in results, the Trump campaign requested a machine-based recount. That, too, showed no meaningful change.

On false claims of hand-count irregularities and how an algorithm was used in the voting machines to swing ballots against Mr. Trump, Mr. Sterling was unequivocal.

“There is no algorithm proof,” he said, adding it was “irresponsible” for people to spread the baseless rumors.

Finally, Mr. Sterling addressed a claim that Georgia Democratic state senators went to Pennsylvania to count ballots as part of some conspiracy to help Mr. Biden in that state, saying it was not true. He made his exasperation clear.

Barbra Streisand Is, as Ever, Firmly in Control