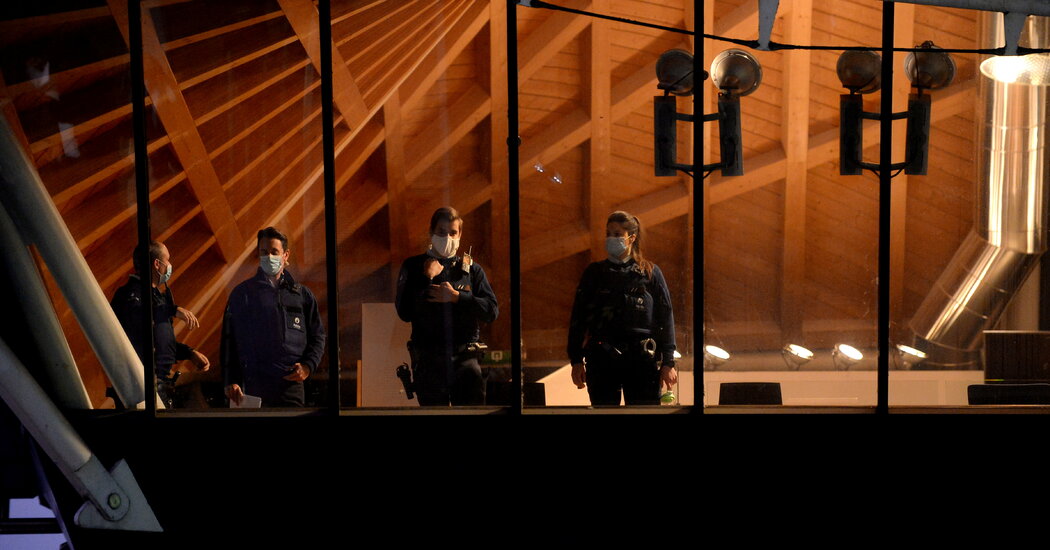 Prosecutors say the diplomat, Assadollah Assadi, was carrying out a plan organized by Iran’s intelligence services against an overseas opposition group.

Police officers at the court building in Antwerp, Belgium, on Friday, before the trial of the Iranian diplomat Assadollah Assadi, who is charged with planning to bomb a meeting of an exiled Iranian opposition group in France.Credit…Johanna Geron/Reuters

BRUSSELS — The bomb was handed over at a Pizza Hut in Luxembourg. The intent, prosecutors say, was to blow up a rally in France of a prominent opposition group to the Iranian government.

An Iranian diplomat based in Vienna and three other Iranians went on trial on Friday in Antwerp, Belgium, over the alleged plot, which the Belgian and French authorities say was organized by Iran’s intelligence services and which was tipped off to them by Mossad, the Israeli intelligence agency.

The prosecutors have accused the Iranian diplomat, Assadollah Assadi, 48, of bringing the bomb, a little more than a pound of TATP explosives and a detonator, to Vienna from Iran in his luggage on an Austrian Airlines flight. He then drove it to Luxembourg in a rented car and handed it over to an Iranian-Belgian couple on June 30, 2018, in the Pizza Hut, prosecutors say.

The couple, Amir Saadouni, 40, and his wife, Nassimeh Naami, 36, had been granted political asylum and later citizenship in Belgium. They were arrested two days later as they drove to Paris from Antwerp on the day of the rally. Mr. Assadi was arrested at a service station in Germany, where he had no diplomatic immunity, on his way back to Vienna.

French and Belgian officials believe the three Iranians are agents of the Iranian intelligence ministry. A fourth man, Mehrdad Arefani, 57, also Iranian-Belgian, is accused of being an accomplice of Mr. Assadi. The four are charged with attempting to carry out a terrorist attack and face sentences of up to 20 years in prison.

Image The convention of the National Council of Resistance in Iran in Villepinte, France, in 2018 that was believed to be the target of a bomb plot.Credit…Zakaria Abdelkafi/Agence France-Presse — Getty Images

As the proceedings began in Antwerp on Friday, Mr. Assadi chose not to appear. His lawyer, Dimitri de Beco, said his client contested the charges and would raise procedural issues, including a claim of diplomatic immunity.

The authorities say the target of the plot was the annual convention in Villepinte, outside Paris, of the National Council of Resistance in Iran, the political wing of the Mujahedeen Khalq, or M.E.K.

The leader of the council, Maryam Rajavi, is a controversial figure who has been compared to the leader of a cult along with her husband, Massoud Rajavi, who disappeared during the Iraq war in 2003 and is believed to be dead.

Ms. Rajavi advocates a revolution in Iran and says she would act as interim president of a new government. The bomb plot, prosecutors believe, was aimed at killing her.

The 2018 convention was also attended by well-known international figures, including former Mayor Rudolph W. Giuliani of New York; the former House speaker Newt Gingrich; the former F.B.I. director Louis Freeh; former Gov. Bill Richardson of New Mexico; former Prime Minister Stephen Harper of Canada; and the Colombian politician Ingrid Betancourt. In the past, such figures have been paid large sums for their appearances and lobbying activities.

The M.E.K., which Ms. Rajavi also leads, has a complicated history. It began in opposition to the shah of Iran and later was declared a terrorist organization by the European Union until 2009 and by the United States until 2012.

Iran’s government has a complicated structure, with organizations like the Islamic Revolutionary Guard Corps often seeming to operate separately from the government.

But the head of Belgium’s State Security Service, Jaak Raes, said that intelligence officials had determined the planned bombing was a state-sanctioned operation, approved in Tehran.

“The plan to attack was conceived on behalf of Iran and under its leadership,” Mr. Raes wrote in a letter to law enforcement officials, including the Belgian federal prosecutor, Frédéric Van Leeuw. “It was not a personal initiative of Assadi.”

The trial comes as Mr. Zarif and Mr. Rouhani are trying to restore better relations with the United States after the election of President-elect Joseph R. Biden Jr.

In addition, elections in Iran are scheduled for June, with the government’s more hard-line opponents expected to do well, while the European Union is trying to keep the 2015 Iran nuclear deal alive until the Biden administration takes office.

The allegation of a bomb plot is not the first example of Tehran’s efforts to eliminate opposition abroad. Iran is accused of planning an assassination in Denmark, also in 2018, that embarrassed the European Union when Denmark called for sanctions against Iran.

But the Europeans have always emphasized that the 2015 deal was aimed only at Iran’s nuclear program and would not be affected by other issues, including state-sponsored terrorism.

The trial is expected to last several days, with a court judgment early next year.

Ice Fishing | Tips for the First Freeze of the Season

Solving the World’s Problems at the Venice Architecture Biennale