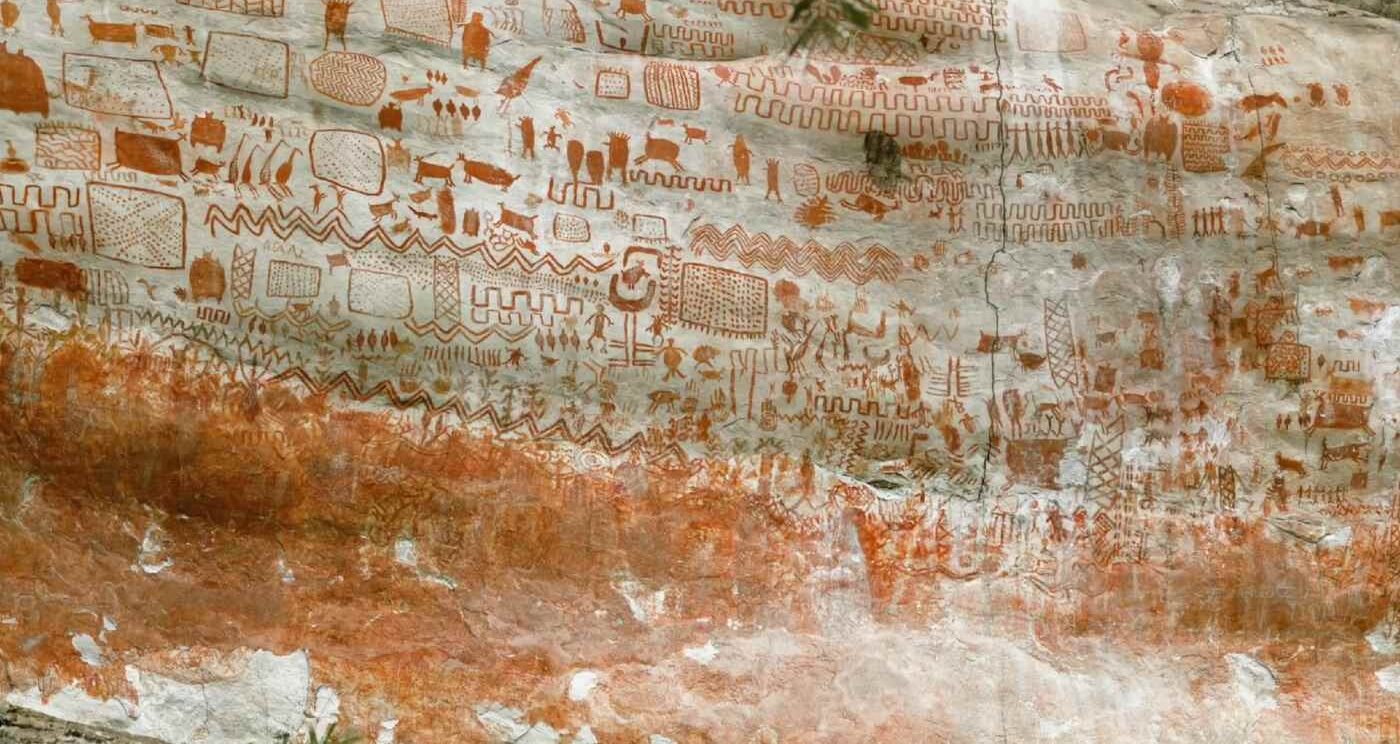 Tens of thousands of pristine cave paintings were recently found daubed across an eight-mile stretch of rock in a once-in-a-century discovery in Colombia’s Amazon rainforest.

Hailed as the “Sistine Chapel of the Ancients,” it’s the kind of discovery that changes the world of archaeology.

Believed to be 12,500 years old, the art is extremely detailed, and includes handprints and depictions of Ice Age megafauna like the mastodon, a relative of the mammoth, Ice Age horses, and giant ground sloths.

The discovery, made in Chiribiquete National Park in the south of Colombia, was actually made last year but has been kept secret because it’s the set of a major documentary called Jungle Mystery: Lost Kingdoms of the Amazon.

Presumably, archaeologists also want to preserve as much time to study the art alone as they can, as the news could draw thousands of tourists, or even looters and artifact hunters to the site.

The discoverers suspect the works could have been made by Paleolithic hunters who crossed the Bering land bridge into the new world from Siberia.

A joint Colombian-British team made the discovery, led by Jose Iriarte, a professor of archaeology at Exeter University, who was quite vocal about the raw power of literally tens of thousands of different images, some of which are so well done they include horse tails with individual hairs painted.

“When you’re there, your emotions flow… We’re talking about several tens of thousands of paintings. It’s going to take generations to record them … Every turn you do, it’s a new wall of paintings,” he told the Observer.

Further complicating the mystery is that the paintings cover nearly every inch even far up the cliff faces where they were only seen clearly when the archaeologist broke out the flying camera drones.

“I’m 5ft 10in and I would be breaking my neck looking up. How were they scaling those walls?” said Paleo-archaeologist Ella Al-Shamahi, who will present the new documentary.

Trees and hallucinogenic plants are also depicted, which wasn’t a surprise to Iriarte who noted that “for Amazonian people, non-humans like animals and plants have souls, and they communicate and engage with people in cooperative or hostile ways through the rituals and shamanic practices that we see depicted in the rock art.”

Chiribiquete was an area that was controlled by the anti-government paramilitary organization FARC until recently, when they signed a truce with Bogota, which is likely one reason why it’s taken so long to discover such an enormous trove of cave paintings.

Al-Shamahi recalled, according to the Guardian, that “when we entered FARC territory, it was exactly as a few of us have been screaming about for a long time. Exploration is not over. Scientific discovery is not over but the big discoveries now are going to be found in places that are disputed or hostile.”

The team will be back, searching the surrounding areas for more paintings as soon as COVID-19 allows.

Until then, Jungle Mystery: Lost Kingdoms of the Amazon will debut on Channel 4 UK at 6:30PM GMT on December 5th.

(WATCH the GIPRI Colombia story of the discovery in the video below.)

SHARE the News of This Astonishing Find With Pals…