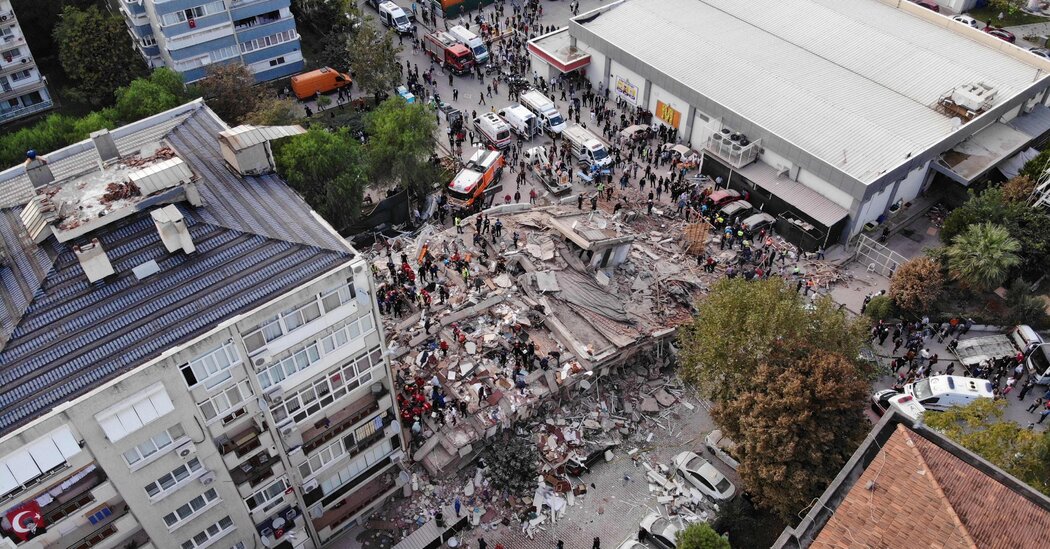 The quake, centered in the Aegean, killed at least 24 people in Turkey and two in Greece. Ten hours after it struck, rescue workers were still pulling people from rubble in the Turkish city of Izmir. 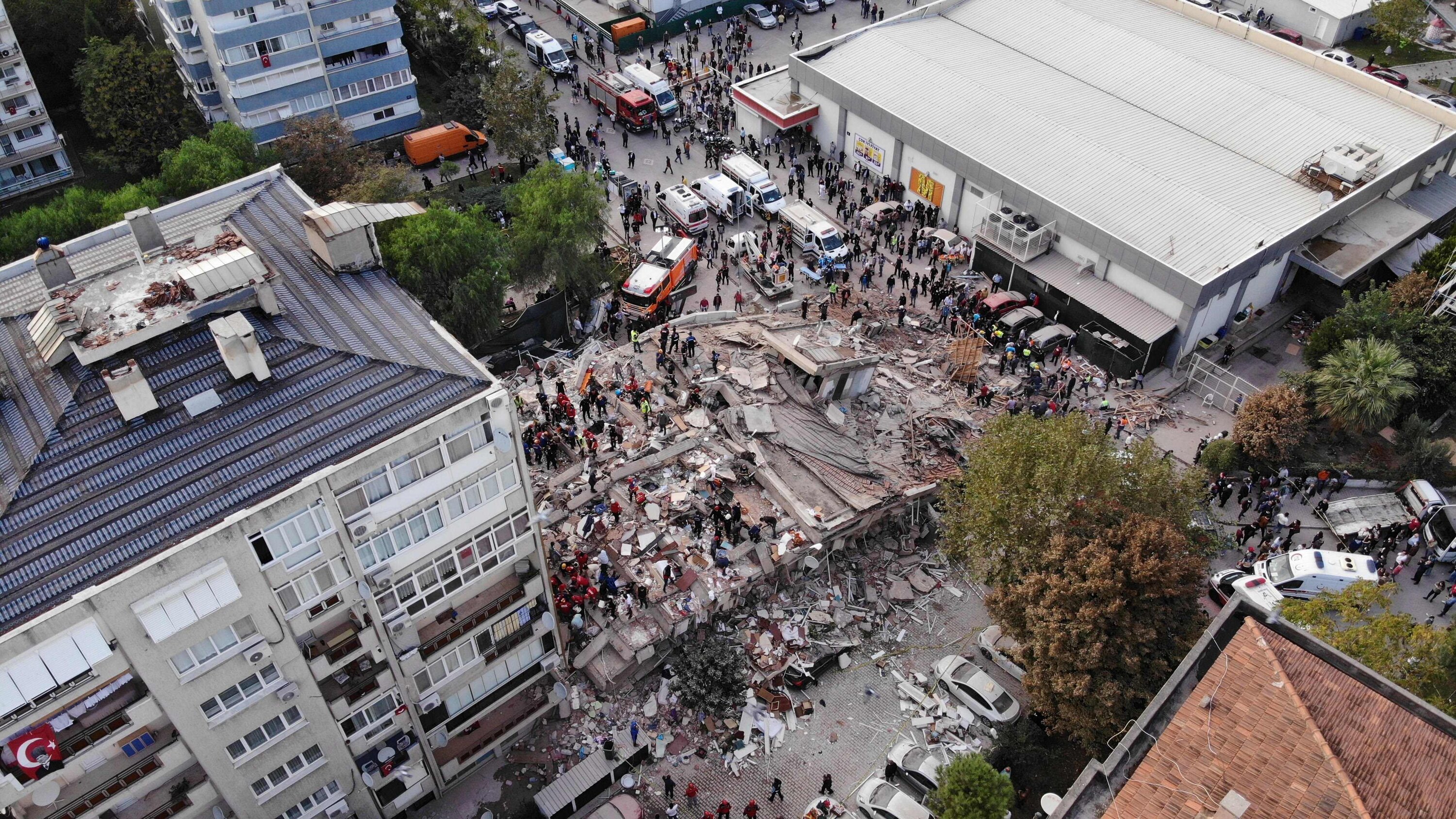 At least 607 people were confirmed injured in Turkey and rescue efforts were underway in 17 buildings in the city of Izmir after a magnitude 7.0 earthquake hit the Aegean Sea on Friday afternoon.CreditCredit…Ihlas News Agency, via Agence France-Presse — Getty Images

Rescue workers scrambled into the early morning Saturday in a frantic effort to save people trapped under debris in the western Turkish city of Izmir, several hours after a major earthquake in the Aegean Sea leveled several buildings and severely damaged many more.

At least 24 people were killed in Turkey and hundreds were reported injured, officials said. Another two people were killed in Greece from the earthquake, which had a magnitude of 7.0 according to the United States Geological Survey, and was centered off Samos, a Greek island near Turkey’s coast.

More than 1,200 workers were involved in rescue efforts involving at least 13 buildings in Izmir, the country’s third-most populous city with about three million people. Images posted to social media and videos aired on state television showed people being pulled from the rubble into the embrace of loved ones.

Image Rescue workers continued to search for survivors in Izmir into the night.Credit…Usame Ari/Getty Images

Nearly 10 hours after the quake struck, three people were rescued from the rubble of an eight-story building, Turkish television reported, showing dramatic footage of one being pulled from the debris.

The quake struck just before 3 p.m. on Friday, causing panicked residents of Izmir to dash into the street, many of them wearing face masks because of the coronavirus pandemic. Video showed tremors lasting 35 seconds or more.

In Greece, two teenagers died in Samos when a wall collapsed on them, state news reported.

The quake rattled several parts of Greece and was felt in Istanbul, about 200 miles northeast of Izmir. But much of the damage appeared to be in the city of Izmir, a center for tourism and industry that is prone to earthquakes. 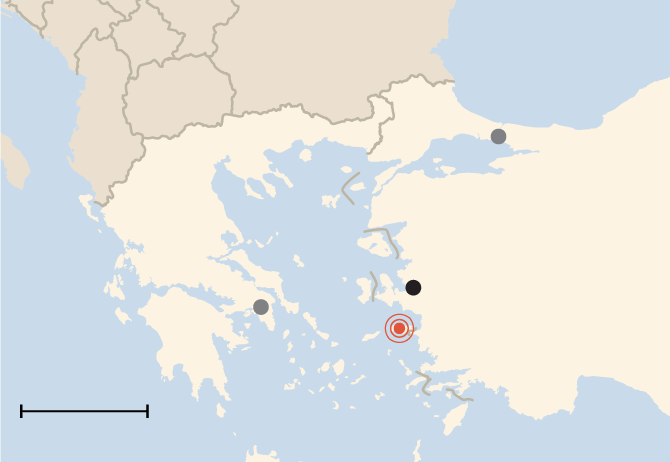 One young man was pulled from the debris of a fallen building and was quickly reunited with his mother. “My three children were at home. I was not,” she told Haber Turk Television. “They are all fine, survived.”

Gulen Kurtcebe, who was at a market in Izmir when she felt the tremors, said that local residents were accustomed to earthquakes but “this was different.” Initially, she said, she thought she was having a dizzy spell, but then a woman nearby started screaming, “Earthquake!”

“At that moment, we all started to run,” she said.

In Seferihisar, a town near Izmir, video showed seawater flooding a shoreline neighborhood. Yasar Keles, a local official, said a woman in a wheelchair drowned as the waves hit.

“I saw five, six cars in the sea, and more than 50 yachts washed up on the shore,’’ he said in a phone interview. Some of the vessels, pulled from their anchors, had sunk.

On the Greek island of Samos, residents also poured into the streets, with many posting photos and videos to social media that showed flooding in the main port. State television reported that two teenagers, 15 and 17, were killed after being crushed under a collapsed wall in the main town on Samos.

“Words are too poor to describe how one feels faced with the loss of these children,” Prime Minister Kyriakos Mitsotakis of Greece said in a post on Twitter.

Seawater flooded a square at the port of Vathi on the island of Samos on Friday.Credit…Michael Svarnias/Associated Press

The deputy mayor of Samos, Giorgos Dionysiou, described “scenes of chaos” on the island in comments carried by several Greek news websites. “People are panicking and have run out onto the streets,” he said. “We’ve never seen anything like this.”

He said that several buildings had been damaged, mainly older ones.

Greece and Turkey, longtime adversaries, are now locked in a bitter dispute over drilling rights to natural gas deposits in the east Mediterranean. But they also share a history of suffering unleashed by earthquakes, and that has brought them closer, if only for a time.

That proved true again on Friday. Shortly after the earthquake struck, Mr. Mitsotakis offered his condolences to President Recep Tayyip Erdogan of Turkey in a post on Twitter,

A short time later, Mr. Erdogan returned the sentiment, with his own post offering condolences to Greece and noting that Turkey also was at the ready “to help Greece heal its wounds.”

“That two neighbors show solidarity in difficult times is more valuable than many things in life,” he wrote.

A car buried in debris after the earthquake in Izmir.Credit…Tuncay Dersinlioglu/Reuters

Greece responded immediately to that disaster, sending large search-and-rescue teams and organizing aid through nongovernment organizations and private citizens’ initiatives, including a major blood drive to help save lives across the border.

Within three weeks Turks reciprocated when a major earthquake hit Athens. The Turkish government dispatched an expert search-and-rescue team to Athens, and phone lines to the Greek Embassy in Ankara were flooded with calls from Turks offering to donate blood.

“Whatever our differences,” Mr. Mitsotakis wrote on Twitter on Friday, “these are times when our people need to stand together.”