As Trump Rails Against Loss, His Supporters Become More Threatening 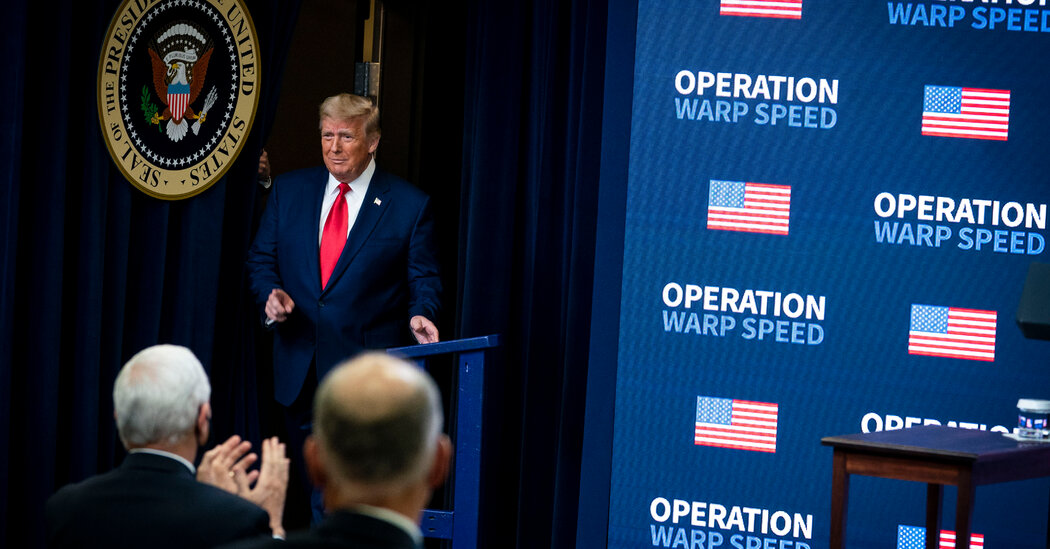 The president’s baseless claims of voting fraud have prompted outrage among his loyalists and led to behavior that Democrats and even some Republicans say has become dangerous.

President Trump at a summit meeting on the vaccine at the White House on Tuesday.Credit…Doug Mills/The New York Times

With a key deadline passing Tuesday that all but ends his legal challenges to the election, President Trump’s frenzied campaign to overturn the results has reached an inflection point: Certified slates of electors to the Electoral College are now protected by law, and any chance that a state might appoint a different slate that is favorable to Mr. Trump is essentially gone.

Despite his clear loss, Mr. Trump has shown no intention of stopping his sustained assault on the American electoral process. But his baseless conspiracy theories about voting fraud have devolved into an exercise in delegitimizing the election results, and the rhetoric is accelerating among his most fervent allies. This has prompted outrage among Trump loyalists and led to behavior that Democrats and even some Republicans say has become dangerous.

Supporters of the president, some of them armed, gathered outside the home of the Michigan secretary of state Saturday night. Racist death threats filled the voice mail of Cynthia A. Johnson, a Michigan state representative. Georgia election officials, mostly Republicans, say they have received threats of violence. The Republican Party of Arizona, on Twitter, twice called for supporters to be willing to “die for something” or “give my life for this fight.”

“People on Twitter have posted photographs of my house,” said Ann Jacobs, the chair of the Wisconsin Elections Commission, who alerted her neighbors and the police about the constant threats. She said another message mentioned her children and said, “I’ve heard you’ll have quite a crowd of patriots showing up at your door.”

Mr. Trump himself has contacted numerous Republican state officials, pressing them to help him overturn the election he clearly lost. He has subjected others to repeated public shamings, lambasting governors to take action they are not legally allowed to take to keep Mr. Trump in power.

But absent a single significant victory in his dozens of lawsuits — and with a key defeat delivered by the Supreme Court on Tuesday — the president’s crusade is now as much a battle against the electoral process itself, as he seeks to cast doubt on free and fair elections and undermine Joseph R. Biden Jr. before he takes the oath of office.

“There is long-term damage when this kind of behavior is normalized,” Jeff Flake, a former Republican senator from Arizona, said on Twitter. “It is not normal, and elected Republicans need to speak out against it.”

Last week, a top Republican election official in Georgia, Gabriel Sterling, implored the president to stop attacking the voting process in the state, saying it had prompted threats against officials and poll workers.

Tuesday’s procedural deadline, known as safe harbor, serves as something of a guarantee that Congress must count the slate of electors certified by the deadline, and acts as an accelerant to resolve any outstanding election disputes. It also likely limits further legal challenges to halt or disrupt the official certification of electoral votes that Mr. Biden needs to claim the presidency.

The president, however, dismissed the date as insignificant, saying on Tuesday that the true deadline arrives on Jan. 6 when Congress meets to approve certification.

Many Republican leaders in critical swing states are standing behind the president’s false narrative, unwilling to contradict his claims. Along with the president, their stance is further convincing tens of millions of Americans that the electoral process is too corroded to legitimately deliver the presidency to anyone whose name is not Trump.

Those supporters have started to flood the voice mails, cellphones and inboxes of dozens of elected officials across the country with angry messages and threats, as well as countless officials who handle local elections. The tenor has seemed to grow more menacing as Mr. Trump’s efforts appear even more unlikely to succeed, some officials said.

“They’re getting more angry, and we’ve been getting emails all the time, all hours of the day and night,” said Jennifer O’Mara, a Democratic state representative in Pennsylvania. She said her staff had been subjected to threats, as had her Republican colleagues. “A lot of calls are saying we won’t be forgetting.”

Jocelyn Benson, the secretary of state in Michigan, said she had just finished putting up Christmas decorations with her 4-year-old son when she heard dozens of Trump supporters shouting outside her home. Some chanted “Stop the Steal” and demanded an audit of Michigan’s election results, which showed Mr. Biden winning by roughly 154,000 votes.

“Ever since the president first tweeted at me and every time there is an additional attempt to spread false information, you see an uptick in the threats,” Ms. Benson said in an interview on Tuesday. “And now apparently, they’re in front of my house, in the dark of night, in this very private, quiet residential neighborhood. We are concerned not only for the safety of my family, but my neighbors as well.

“This challenging, divisive moment that we find ourselves in, the only way to get out of it is for elected officials on both sides of the aisle to condemn what’s happening.”

Malcolm Kenyatta, a Democratic state representative from Pennsylvania, said he received dozens of emails every day. “It’s a bit more pronounced when you’re Black and queer like I am, that they go down the rabbit hole of parroting all the nastiness and vitriol that we see from the president all the time,” he said.

He said one person created a fake email address under his own name and then sent him profane threats.

Darrin Camilleri, a Democratic state representative in Michigan, said he had received one email that said, “Be prepared to take your last meal,” and another that read, “We’re looking forward to bring back firing squads.”

Mr. Camilleri said his parents were also receiving harassing and threatening calls. “We’ve sent more than 20 death threats to the House sergeants to look into,” he said.

The safe harbor deadline all but ensures Mr. Biden will receive the 270 votes in the Electoral College he needs to win the presidency, and most likely wind up with 306, the same total Mr. Trump won in 2016 (two defected, however). Though Congress will determine which states meet the safe harbor deadline, it is traditionally considered met when a state certifies its votes.

As of Monday, all but one state — Hawaii — had certified their elections.

Though the safe harbor deadline is technically about the relationship between states and Congress, it also largely insulates states that have certified their election results from legal challenges.

“It plays into litigation because courts are aware of this deadline and want to give the states this benefit, so they do their best to try to comply with it,” said Richard L. Hasen, an election law expert at the University of California, Irvine.

But despite more than a century of precedent, allies of the president are continuing to file baseless lawsuits seeking to upend the election. On Tuesday, the Texas attorney general filed an audacious lawsuit in the Supreme Court against four other states — Michigan, Wisconsin, Pennsylvania and Georgia — with more claims of election irregularities, and no evidence to support them.

Texas asked the justices to put its case on an exceptionally fast track, but the court has acted with measured deliberation in considering similar requests and may defer consideration of whether to hear the suit until it can have no practical impact.

And the Republican legal efforts were dealt yet another loss late Tuesday afternoon, when the Supreme Court rejected a request by Republicans in Pennsylvania to overturn election results in the state.

There were no dissenting opinions.