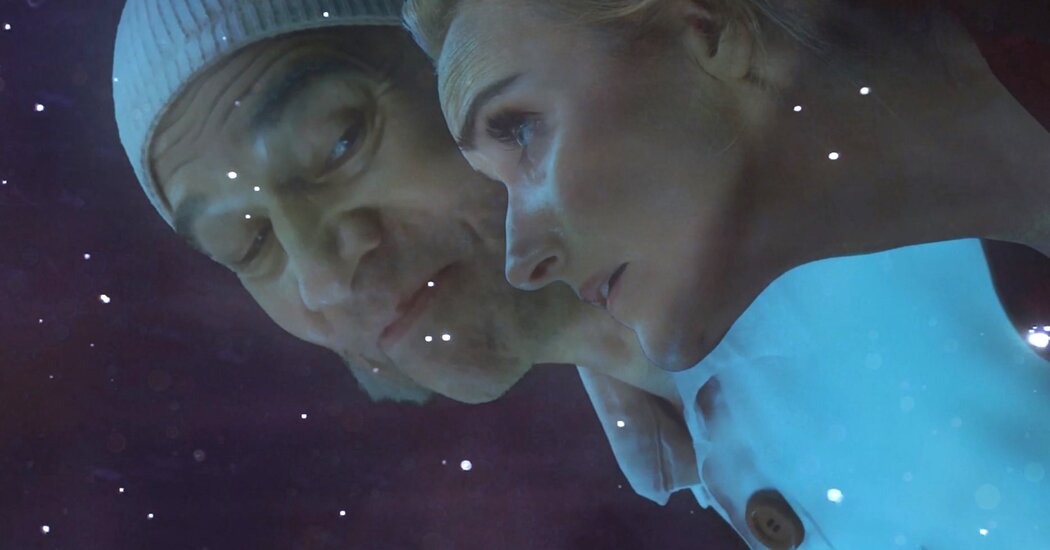 Let’s get the 800-pound fruitcake out of the way: If you love “A Christmas Carol,” this is the year to binge it, as companies across the United States are dreaming up innovative remote ways to present the show. A gender-bending new musical, “Estella Scrooge,” even updates Scrooge (Betsy Wolfe) as a Wall Street meanie with a taste for foreclosures. The show’s nifty cast also includes Lauren Patten (“Jagged Little Pill”), Patrick Page, Clifton Duncan and Danny Burstein.

But December is not just for remorseful capitalists and ghosts busting the space-time continuum — it’s also for giving, with several opportunities to help your favorite companies or organizations. Among them is the Acting Company’s holiday benefit on Dec. 17, hosted by Rainn Wilson and starring Kevin Kline, Harriet Harris and Jesse L. Martin.

Below you will find a sample of the seasonal fare available at the click of a button.

‘The Wonderful Wizard of Oz’

From Oxford, Creation Theater is presenting an ambitious-looking production of this classic with the performance artist and singer Le Gateau Chocolat — as comfortable at the Bayreuth Festival as he is doing children’s shows — popping up as the Good Witch. This is live, so viewers outside Britain need to take time differences into account. Dec. 19-Jan. 3; creationtheatre.co.uk.

Dr. Seuss, for Kids and Adults

The entire family can gather for NBC’s new rendering of “Dr. Seuss’ The Grinch Musical!” with Matthew Morrison as the hairy grump trying to ruin Whoville’s Christmas. Dec. 9, with a repeat on Dec. 21; NBC.

On the other hand, you may want to put the kids to bed before pressing “play” on Matthew Lombardo’s bawdy off-brand sequel, “Who’s Holiday!” The Grinch is an unseen but key character in this solo show where Cindy Lou Who (the feisty Lesli Margherita) is an adult lounging about a kitschy trailer. Dec. 11-15; broadwaycares.org.

The National Yiddish Theater Folksbiene is going international for this mix of live performances and video greetings from a globe-spanning array of performers, including Mandy Patinkin and Barry Manilow. Adam B. Shapiro, who was in the cast of the company’s hit Yiddish version of “Fiddler on the Roof,” is the M.C. Dec. 8-12; nytf.org.

‘Home for the Holidays’

‘A Season of Hope and Inspiration’

The only concept for the Broadway Inspirational Voices is the might of choral singing, and that’s plenty. Just in case, the group has added power guest stars including Patti LuPone, Billy Porter and Leslie Odom Jr. to this holiday concert. Starting Dec. 13; bivoices.org.

Based on Hans Christian Andersen’s story about a persistent toy, Mary Zimmerman’s production of “The Steadfast Tin Soldier,” captured in 2019, is suitable for a wide range of audiences. Through Dec. 27; lookingglasstheatre.org.

As for the youngest theatergoers, they should delight in the Little Angel Theater’s “Mother Christmas,” by Barb Jungr (known in New York for her sterling cabaret performances) and Samantha Lane. The pair, who teamed up last year for “The Pixie and the Pudding,” are now exploring Mrs. Claus’s tight backstage operation. Parents, just pray there’s nothing as catchy as the previous show’s infernal earworm: “There’s no pudding/They haven’t left us pudding/Where’s our pudding?” Starting Dec. 4; youtube.com/thelittleatheatre.

‘Jack and the Beanstalk’

Look at the bright side: There may not be physical shows to dress up for, but at least we can watch pantomime in America! A British Christmas tradition, panto relies on broad humor, shameless slapstick and audience interaction (prepare to boo and holler at your screen). A good option for newbies and hard-core fans alike might be “Jack and the Beanstalk,” from the Belgrade Theater in Coventry. In addition to adapting the story, Iain Lauchlan takes on the dame role, which is traditionally a drag one. Through Dec. 31; belgrade.co.uk.

Speaking of outlandish ladies, former “Ru Paul’s Drag Race” contestants are everywhere this season. Some, led by Sasha Velour, are starring in “A Drag Queen Christmas 2020,” which was filmed live this fall. Through Jan. 31; dragfans.com.

The making of a variety show — a nearly extinct genre that perdures as comedy fodder — is also the subject of David Cerda’s “The Rip Nelson Holiday Quarantine Special,” presented by the Chicago company Hell in a Handbag. Celebrity guests include Ella Fitzgerald, Charlton Heston and Lucille Ball (disclaimer: these might not be the actual stars). Dec. 4-Jan. 8; handbagproductions.org.

The Irish Repertory Theater is putting on an abridged digital production of the 1989 musical, based on the 1944 film with Judy Garland. The cast is headed by Shereen Ahmed, who led the tour of Lincoln Center’s “My Fair Lady,” as Esther Smith; Max von Essen as boy-next-door John Truitt; and Irish Rep regular Melissa Errico as matriarch Anna Smith. Dec. 11-Jan. 2; irishrep.org.

Klea Blackhurst, Jim Caruso and Billy Stritch head the virtual edition of “A Swinging Birdland Christmas,” recorded at the famous club. They should watch their back, though, because the guest star Marilyn Maye may be 92, but she can still out-swing pretty much anybody. Dec. 18-Jan. 19; birdlandjazz.com.

The Minnesota-based ensemble Sounds of Blackness should stir up screens of any size with “The Night Before Christmas: In Concert,” based on the poem “A Visit from St. Nicholas.” Dec. 19-31; ordway.org.

A Biblical Mystery and a Reporting Odyssey