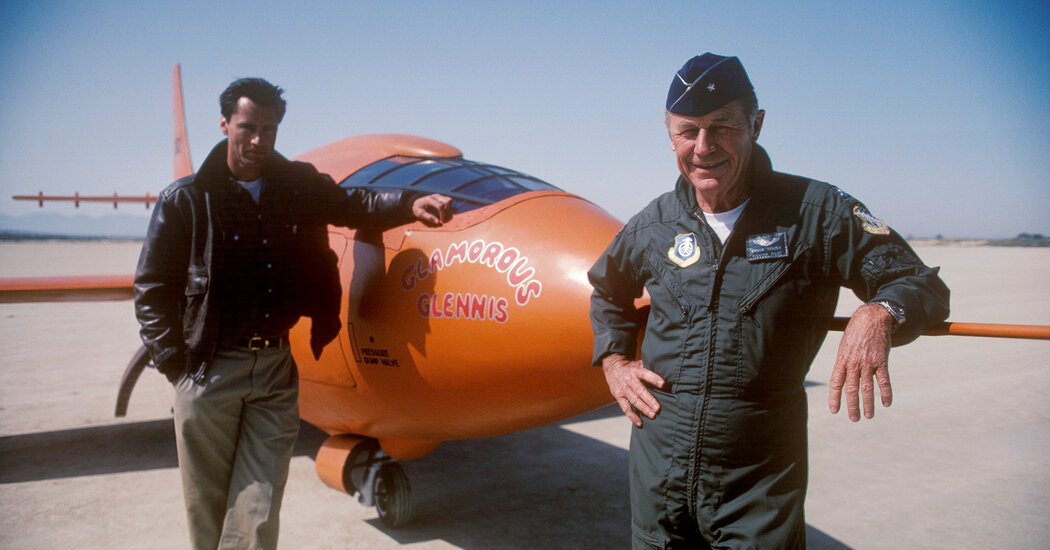 A World War II fighter ace and Air Force general, he was, according to Tom Wolfe, “the most righteous of all the possessors of the right stuff.”

Chuck Yeager in 1948. The previous year, he became the first pilot to break the sound barrier.Credit…Associated Press

Chuck Yeager, the most famous test pilot of his generation, who was the first to break the sound barrier and, thanks to Tom Wolfe, came to personify the death-defying aviator who possessed the elusive yet unmistakable “right stuff,” died on Monday in Los Angeles. He was 97.

His death, at a hospital, was announced on his official Twitter account and confirmed by John Nicoletti, a family friend.

General Yeager came out of the West Virginia hills with only a high school education and with a drawl that left many a fellow pilot bewildered. The first time he went up in a plane, he was sick to his stomach.

But he became a fighter ace in World War II, shooting down five German planes in a single day and 13 over all. In the decade that followed, he helped usher in the age of military jets and spaceflight. He flew more than 150 military aircraft, logging more than 10,000 hours in the air.

His signal achievement came on Oct. 14, 1947, when he climbed out of a B-29 bomber as it ascended over the Mojave Desert in California and entered the cockpit of an orange, bullet-shaped, rocket-powered experimental plane attached to the bomb bay.

An Air Force captain at the time, he zoomed off in the plane, a Bell Aircraft X-1, at an altitude of 23,000 feet, and when he reached about 43,000 feet above the desert, history’s first sonic boom reverberated across the floor of the dry lake beds. He had reached a speed of 700 miles an hour, breaking the sound barrier and dispelling the long-held fear that any plane flying at or beyond the speed of sound would be torn apart by shock waves.

“After all the anticipation to achieve this moment, it really was a letdown,” General Yeager wrote in his best-selling memoir “Yeager” (1985, with Leo Janos). “There should’ve been a bump in the road, something to let you know that you had just punched a nice, clean hole through the sonic barrier. The Ughknown was a poke through Jell-O. Later on, I realized that this mission had to end in a letdown because the real barrier wasn’t in the sky but in our knowledge and experience of supersonic flight.”

Nonetheless, the exploit ranked alongside the Wright brothers’ first flight at Kitty Hawk in 1903 and Charles Lindbergh’s solo fight to Paris in 1927 as epic events in the history of aviation. In 1950, General Yeager’s X-1 plane, which he christened Glamorous Glennis, honoring his wife, went on display at the Smithsonian Institution in Washington.

Image General Yeager, center, in front of his P-51 Mustang with his ground crew when he was an Air Force fighter pilot in Europe.Credit…Courtesy of Chuck Yeager

His feat put General Yeager in the headlines for a time, but he truly became a national celebrity only after the publication of Mr. Wolfe’s book “The Right Stuff” in 1979, about the early days of the space program, and the release of the movie based on it four years later, in which General Yeager was played by Sam Shepard. He was depicted breaking the sound barrier in the opening scene.

In his portrayal of the astronauts of NASA’s Mercury program, Mr. Wolfe wrote about the post-World War II test pilot fraternity in California’s desert and its notion that “a man should have the ability to go up in a hurtling piece of machinery and put his hide on the line and then have the moxie, the reflexes, the experience, the coolness to pull it back in the last yawning moment — and then go up again the next day, and the next day, and every next day.”

That quality, understood but unspoken, Mr. Wolfe added, would entitle a pilot to be part of “the very Brotherhood of the Right Stuff itself.”

Mr. Wolfe wrote about a nonchalance affected by pilots in the face of an emergency in a voice “specifically Appalachian in origin,” one that was first heard in military circles but ultimately emanated from the cockpits of commercial airliners.

“It was,” Mr. Wolfe said, “the drawl of the most righteous of all the possessors of the right stuff: Chuck Yeager.”

In his memoir, General Yeager said he was annoyed when people asked him if he had the right stuff, since he felt it implied a talent he was born with.

“All I know is I worked my tail off learning to learn how to fly, and worked hard at it all the way,” he wrote. “If there is such a thing as the right stuff in piloting, then it is experience. The secret to my success was that somehow I always managed to live to fly another day.”

Charles Elwood Yeager was born on Feb. 13, 1923, in Myra, W. Va., the second of five children of Albert and Susie Mae (Sizemore) Yeager. He grew up in nearby Hamlin, a town of about 400, where his father drilled for natural gas in the coal fields. By the time he was 6, Chuck was shooting squirrels and rabbits and skinning them for family dinners, reveling in a country boy’s life.

The actor Sam Shepard, left, and General Yeager on the set of the 1983 film “The Right Stuff,” in which Mr. Shepard played General Yeager.Credit…Warner Bros.

He enlisted in the Army Air Forces out of high school in September 1941, becoming an airplane mechanic. One day he took a ride with a maintenance officer flight-testing a plane he had serviced and promptly threw up over the back seat. But he joined a flight program for enlisted men in July 1942, figuring it would get him out of kitchen detail and guard duty. He received his pilot wings and appointment as a flight officer in March 1943 while at a base in Arizona, and was commissioned as a second lieutenant after arriving in England for training.

In 2016, when General Yeager was asked on Twitter what made him want to become a pilot, the reply was infused with cheeky levity: “I was in maintenance, saw pilots had beautiful girls on their arms, didn’t have dirty hands, so I applied.”

He possessed a natural coordination and aptitude for understanding an airplane’s mechanical system along with coolness under pressure. He enjoyed spins and dives and loved staging mock dogfights with his fellow trainees.

He flew P-51 Mustang fighters in the European theater during World War II, and in March 1944, on his eighth mission, he was shot down over France by a German fighter plane and parachuted into woods with leg and head wounds. But he was hidden by members of the French underground, made it to neutral Spain by climbing the snowy Pyrenees, carrying a severely wounded flier with him, and returned to his base in England.

Downed pilots were not generally put back into combat, but his pleas to see action again were granted. On Oct. 12, 1944, leading three fighter squadrons escorting bombers over Bremen, Germany, he downed five German planes, becoming an ace in a day. In November, he shot down another four planes in one day.

After the war, General Yeager was assigned to Muroc Army Air Base in California, where hot-shot pilots were testing jet prototypes. He was chosen over more senior pilots to fly the Bell X-1 in a quest to break the sound barrier, and when he set out to do it, he could barely move, having broken two ribs a couple of nights earlier when he crashed into a fence while racing with his wife on horseback in the desert.

The Air Force kept the feat a secret, an outgrowth of the Cold War with the Soviet Union, but in December 1947, Aviation Week magazine revealed that the sound barrier had been broken; the Air Force finally acknowledged it in June 1948.

But life continued much the same at Muroc. The pilots and their families had quarters little better than shacks, the days were scorching and the nights frigid, and the landscape was barren. The pilots flew by day and caroused by night, piling into the Pancho Barnes bar.

In December 1949, Muroc was renamed Edwards Air Force Base, and it became a center for advanced aviation research leading to the space program. In December 1953, General Yeager flew the X-1A plane at nearly two and a half times the speed of sound after barely surviving a spin, setting a world speed record.

General Yeager broke the sound barrier again in an F-15D on the 50th anniversary of his historic flight in 1997.Credit…Michael Caulfield/Associated Press

In the fall of 1953, he was dispatched to an air base on Okinawa in the Pacific to test a MiG-15 Russian-built fighter that had been flown into American hands by a North Korean defector. Battling stormy weather as he took the plane aloft, he analyzed its strengths and weaknesses. In 1962, he became commander of the school at Edwards that trained prospective astronauts.

At a time when the administration of President John F. Kennedy was encouraging diversity in the Air Force, a former test pilot, Edward Dwight Jr., became the only African-American astronaut candidate at the school. But he was never selected for the astronaut corps, retired from the Air Force in 1966 and became a sculptor, specializing in bronze representations of heroic figures in Black history.

In July 2019, Mr. Dwight told The New York Times that General Yeager had never given him a fair chance.

“Every week, right on the dot,” Mr. Dwight said, “he’d call me into his office and say, ‘Are you ready to quit? This is too much for you, and you’re going to kill yourself, boy.’ Calling me a boy, and I’m an officer in the Air Force.”

Responding to those remarks, General Yeager said that he had never told anybody that he would get Mr. Dwight out of the program, that he had not held weekly meetings with him, and that had never called him “boy.”

But he did question Mr. Dwight’s ability. “Isn’t it great that Ed Dwight found his true calling and became an accomplished sculptor?” he wrote in an email.

General Yeager commanded a fighter wing during the Vietnam War while holding the rank of colonel and flew 127 missions, mainly piloting Martin B-57 light bombers in attacking enemy troops and their supplies along the Ho Chi Minh Trail.

After serving as head of aerospace safety for the Air Force, he retired as a brigadier general in 1975. His decorations included the Distinguished Service Medal, the Silver Star, the Legion of Merit, the Distinguished Flying Cross and the Bronze Star. He received the Presidential Medal of Freedom, the nation’s highest civilian award, from President Ronald Reagan in 1985.

NASA’s administrator, Jim Bridenstine, described General Yeager’s death in a statement as “a tremendous loss to our nation.” The astronaut Scott Kelly, writing on Twitter, called him “a true legend.”

His first wife, the former Glennis Dickhouse, with whom he had four children, died in 1990. He married Victoria D’Angelo in 2003. He is survived by his wife; two daughters, Susan Yeager and Sharon Yeager Flick; and a son, Don. Another son, Michael, died in 2011.

In his memoir, General Yeager wrote that through all his years as a pilot, he had made sure to “learn everything I could about my airplane and my emergency equipment.”

It may not have accorded with his image, but, as he told it: “I was always afraid of dying. Always.”