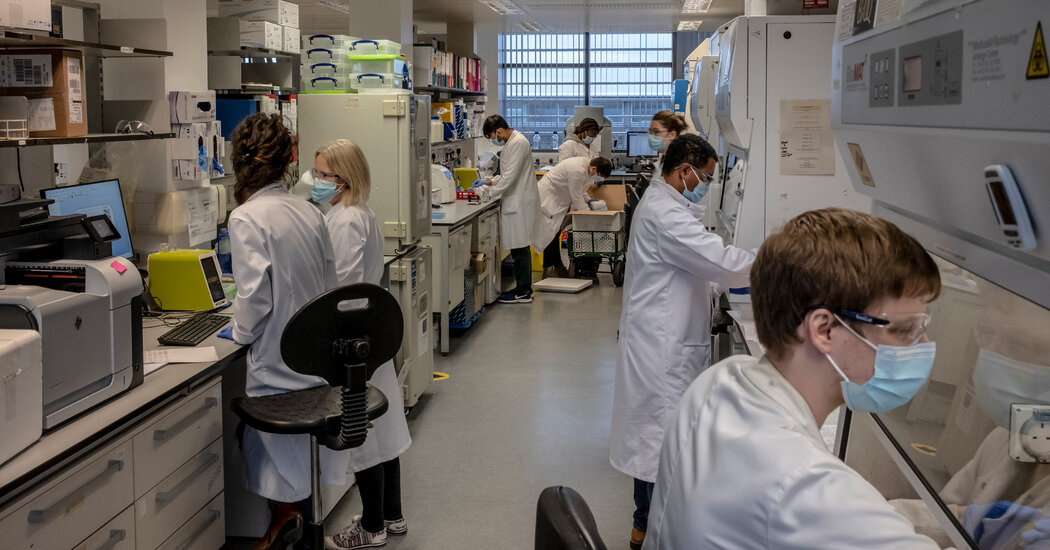 Regulators may approve the troubled AstraZeneca vaccine and the American-made Pfizer shot weeks before the U.S. does so.

Scientists working on the vaccine made by AstraZeneca and the University of Oxford last week in Oxford, England.Credit…Andrew Testa for The New York Times

LONDON — Britain asked its drug regulator on Friday to consider AstraZeneca’s coronavirus vaccine for emergency approval, forging ahead in the face of considerable uncertainty about the vaccine’s effectiveness as the government tries to corral a pandemic that has killed more than 66,000 people in the country.

The request was one of a series of steps that Britain has taken to put itself near the front of the pack of countries hurrying to assess coronavirus vaccine candidates. The country’s drug regulator said on Monday that it intended to decide on an emergency approval for a vaccine made by the American pharmaceutical giant Pfizer and a German company, BioNTech, “in the shortest time possible.” That would potentially put it ahead of American regulators, who plan to make a ruling no sooner than Dec. 10.

In a letter last week, British health officials told hospital executives to be “ready to start vaccinating from the beginning of December.” Hospital executives have already started holding vaccine information sessions with staff members and asking for data to help reassure them that the Pfizer vaccine — the apparent front-runner for approval — is safe.

And Cambridge University Hospitals told staff members that it would begin vaccinating them “from next week using the Pfizer vaccine,” according to an internal email, outlining a plan for booking appointments.

Holding the keys to Britain’s vaccination timeline is its regulator, the Medicines and Healthcare products Regulatory Agency, which has long played a leading role in evaluating drugs for the European Union and is now staking out a more independent role as Britain splits from the bloc.

“They’re pretty fast at the best of times, quite honestly,” Dr. Penny Ward, a visiting professor in pharmaceutical medicine at King’s College London, said of the agency. “And in this situation they’ve really been gearing up to do this as rapidly as possible.”

Still, the job of evaluating AstraZeneca’s vaccine for emergency use will place the agency in the middle of a thicket of difficult questions.

The vaccine was developed by the University of Oxford, making it Britain’s leading homegrown vaccine and the government’s foremost symbol of its scientific prowess during a pandemic that has laid bare many of the country’s weaknesses. (The prime minister’s office went so far as to explore printing the Union Jack flag on vaccine injection kits, HuffPost U.K. reported on Friday.)

Image The AstraZeneca vaccine, seen here, has many advantages over the others in price and handling, but questions have been raised about its effectiveness. Credit…Andrew Testa for The New York Times

But since then, AstraZeneca has acknowledged a key dosing error. The study participants in whom the vaccine was 90 percent effective had mistakenly been given a half dose of the vaccine, followed a month later by a full dose. Among those who received two full doses, the effectiveness dropped to 62 percent.

And the people who received the smaller dosing regimen were 55 years old or younger, making it difficult to know if the more promising results would hold among older people, who are especially vulnerable to Covid-19.

That has eroded the confidence of some scientists and created uncertainty about whether additional testing would bear out the apparently spectacular results. The company itself was unable to explain why the two dosing regimens performed so differently — a question that some scientists said needed answering before wide distribution of the vaccine.

“I can understand why they’ve taken it forward; it still works,” Stuart Neil, a professor of virology at King’s College London, said of the British regulators. “But we’ve still got no idea whether it works well enough.”

In the United States, which has ordered at least 300 million doses of AstraZeneca’s vaccine, the regulatory process is at a standstill. The company said it would seek guidance from the Food and Drug Administration on whether it should formally submit its findings to apply for emergency authorization.

But Britain, which has ordered 100 million doses of the vaccine, is speeding down the regulatory path much more quickly.

That reflects its drug regulators’ close observation of AstraZeneca’s trials in Britain. After Oxford scientists discovered the dosing error months ago, Britain’s medicines agency gave them the green light to continue, the university has said.

A volunteer receiving the AstraZeneca vaccine during trials in Oxford.Credit…Andrew Testa for The New York Times

American and British regulators also conduct their vaccine reviews differently, Dr. Ward said. American regulators ask vaccine makers for raw data, which the F.D.A. reanalyzes to validate company results. Regulators in Britain and elsewhere in Europe rely more heavily on the companies’ own reports, Dr. Ward said, though they reserve the right to verify their accuracy.

With hundreds of people still dying from the coronavirus each day in Britain and the country’s hospitals under enormous stress, Dr. Ward said that any vaccine at AstraZeneca’s level of effectiveness deserved strong consideration. It is inexpensive — only a few dollars per dose — and easy to mass-produce. Unlike vaccines made by Pfizer and another American company, Moderna, AstraZeneca’s can be stored for months in normal refrigerators.

And in using a viral vector to provoke an immune response to the coronavirus, the AstraZeneca vaccine relies on a technique with a longer track record than Pfizer’s and Moderna’s, both of which use a technology relying on sending genetic instructions through a molecule known as “messenger RNA.”

“A vaccine doesn’t need very, very, very high effectiveness in order to be useful in reducing the burden of disease, particularly more severe disease, and in relieving pressure on a backed-up health system,” Dr. Ward said, noting that seasonal flu vaccines are useful even though they vary widely in their effectiveness.

Now that Britain has decided to leave the European Union, the bloc’s regulatory agency no longer relies on Britain to take the lead in assessing new medicines and vaccines, as it did for many years. But analysts said that Britain’s drug regulator remained a bellwether, making its rulings influential in Europe and elsewhere.

For Britain, the decisions are crucial in part because the government has hedged its bets by pre-ordering a total of 355 million doses of seven different vaccine candidates, among the most ambitious hauls in the world.

“It’s like having an array of weapons in your armory,” said Gino Martini, the chief scientist at the Royal Pharmaceutical Society.

It remains unclear when British regulators will decide on either Pfizer or AstraZeneca’s vaccine. (With Moderna’s vaccine unlikely to be available in Britain until at least the spring, the government has not formally requested an emergency assessment.) The agency said on Friday that it would “rigorously assess the latest data” and that “the safety of the public will always come first.”

And temporary approval of any vaccines in Britain will not limit their availability in the United States or other wealthy countries that have also ordered many millions of doses.

But scientists have stressed that it is essential for the public’s faith in coronavirus vaccines that British regulators thoroughly vet questions about all of the candidates, and especially AstraZeneca’s, before giving temporary approval.

“I’m sure they’re feeling the pressure like everybody else that if there’s a chance of this making a difference, then they need to make a decision as soon as they can,” Professor Neil said. “But the trouble is it’s getting snarled up in a lot of financial competition and chest-beating about who’s got the best vaccine. And the error in dosing raises awkward questions that need to be fully investigated.”

A new method for making a key component of plastics