Barbra Streisand, Patti LaBelle and Dolly Parton on Their Most Memorable Performances 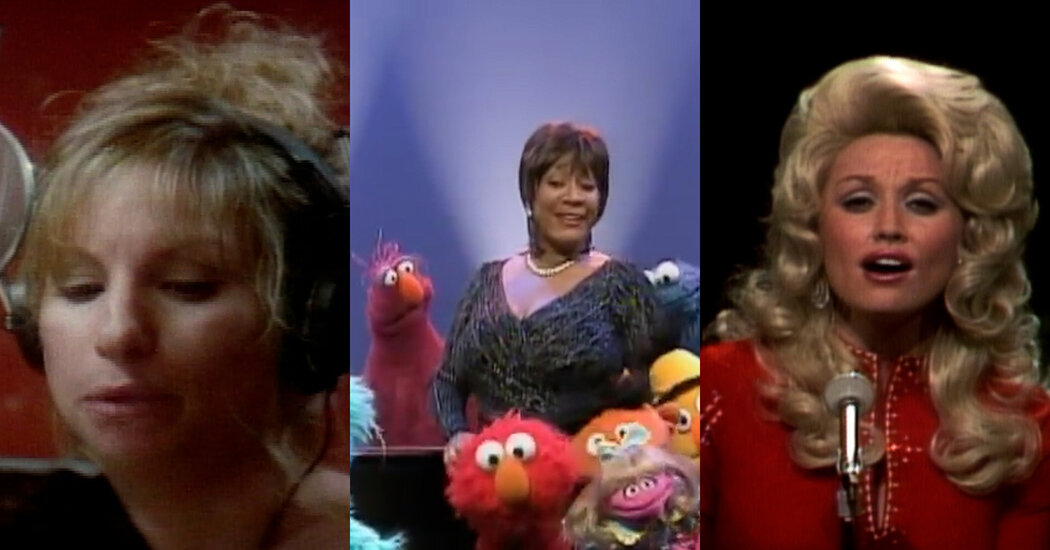 The legendary singers share their favorite moments captured onscreen over the years. 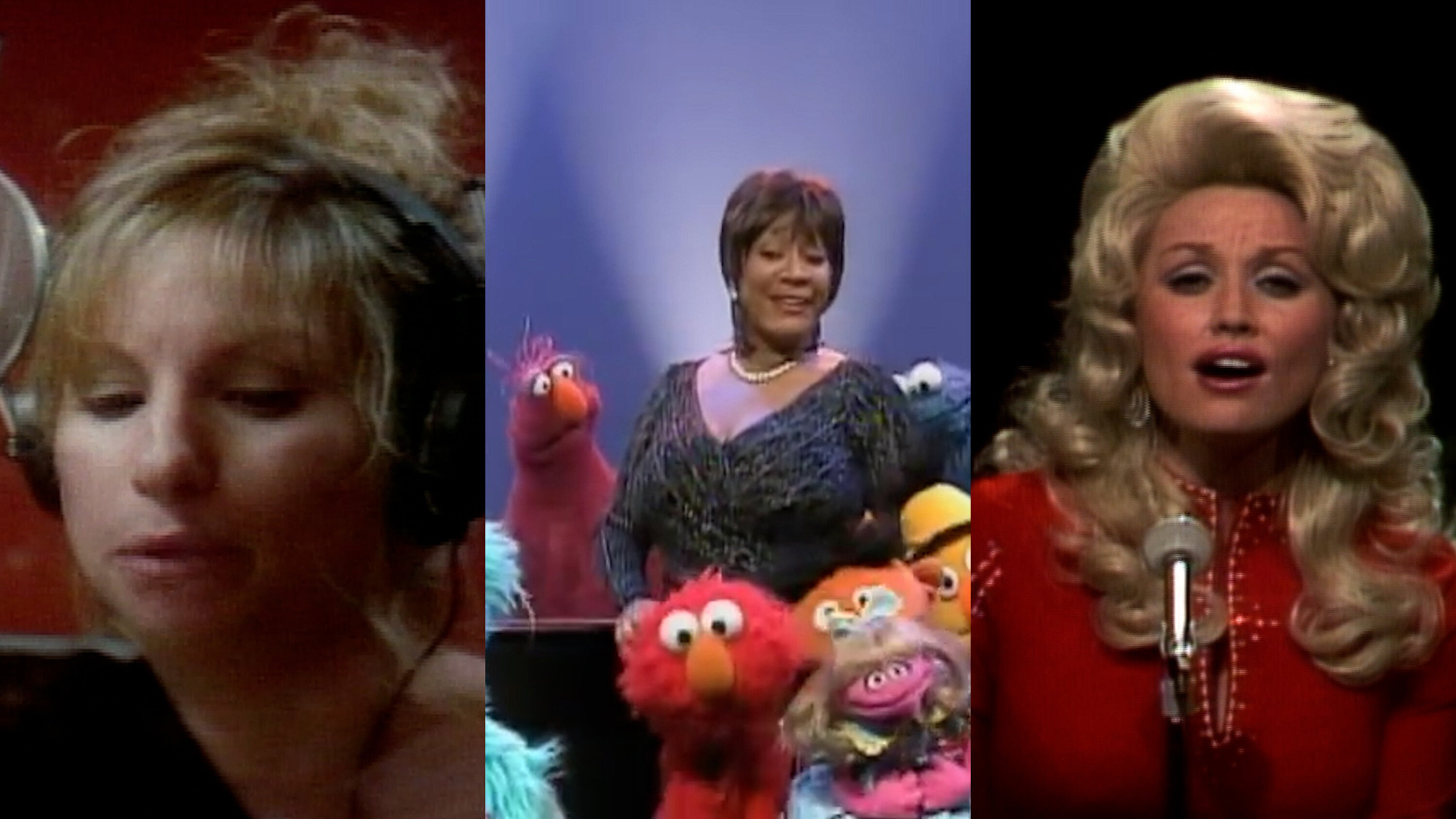 T’s Dec. 6 Holiday issue honors three American divas — Barbra Streisand, Patti LaBelle and Dolly Parton. Since the ’60s, when their careers began, each has, as Hanya Yanagihara writes in her Editor’s Letter, become “synonymous with an iconic American musical style: the Broadway show tune (Streisand), country (Parton) and soul (LaBelle),” bringing us infinite delight through their “music, acting and sheer force of personality.” Below, we’ve rounded up clips of each artist’s most treasured performances — or most memorable moments — that, when presented altogether, showcase their range, their brilliance and the indelible mark they’ve made on the culture. 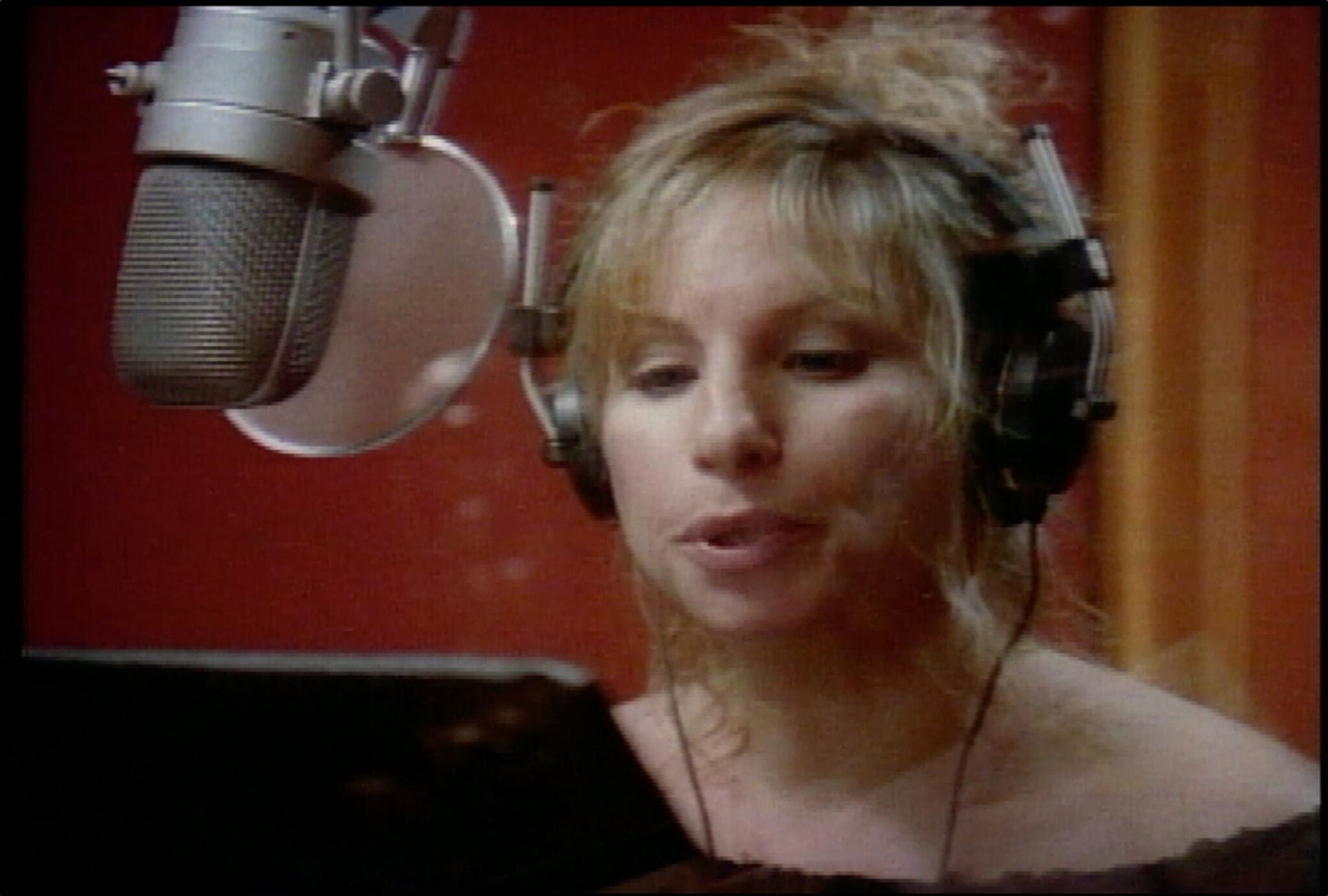 A clip from the 1985 television special “Putting It Together: The Making of ‘The Broadway Album.’”CreditCredit…Courtesy of Sony

“I love doing a song from beginning to end in one take!” Streisand says of the recording of “Putting It Together,” which was originally written by Stephen Sondheim for his 1984 musical “Sunday in the Park With George.” Streisand’s rendition appears on her “Broadway Album,” a compendium of 12 show tunes, and a homage to the theater district that made her. (She got her start on Broadway in 1962, when she starred in Arthur Laurents’s “I Can Get It for You Wholesale.”)

In 1968, Streisand made her cinematic debut as the Ziegfeld star Fanny Brice in the musical “Funny Girl,” a performance that would earn her an Academy Award for best actress (her first of two Oscars). “My Man,” one of the film’s 10 songs featuring Streisand, remains a favorite of hers: “Movie musicals used prerecorded tracks,” she recalls, “but because I’m a terrible lip-syncher, and I needed the emotion to be real, I asked my director, Willy Wyler, if I could sing this part live. Thankfully, he let me do it. I adored him!”

“For my version of ‘A Star is Born,’ Kris Kristofferson and I sang the whole score live,” says Streisand of the 1976 remake. “Because of that,” she adds, “we were able to be in the moment and have a lot of fun, never knowing what to expect next.” Streisand would go on to receive both a Golden Globe and an Academy Award for best original song for the film’s love theme, “Evergreen,” becoming the first female composer to win an Oscar.

“It was such an honor to be the first woman to receive the award for best director at the Golden Globes,” Streisand says of her win for “Yentl,” adding, “There are so many more women who deserve this award.” (Streisand remains the only woman to have ever received the distinction.)

“I felt very privileged to be asked to sing at President Clinton’s inauguration,” she says, adding, “It was a time of great joy for our country. These hopeful words are still relevant today.” 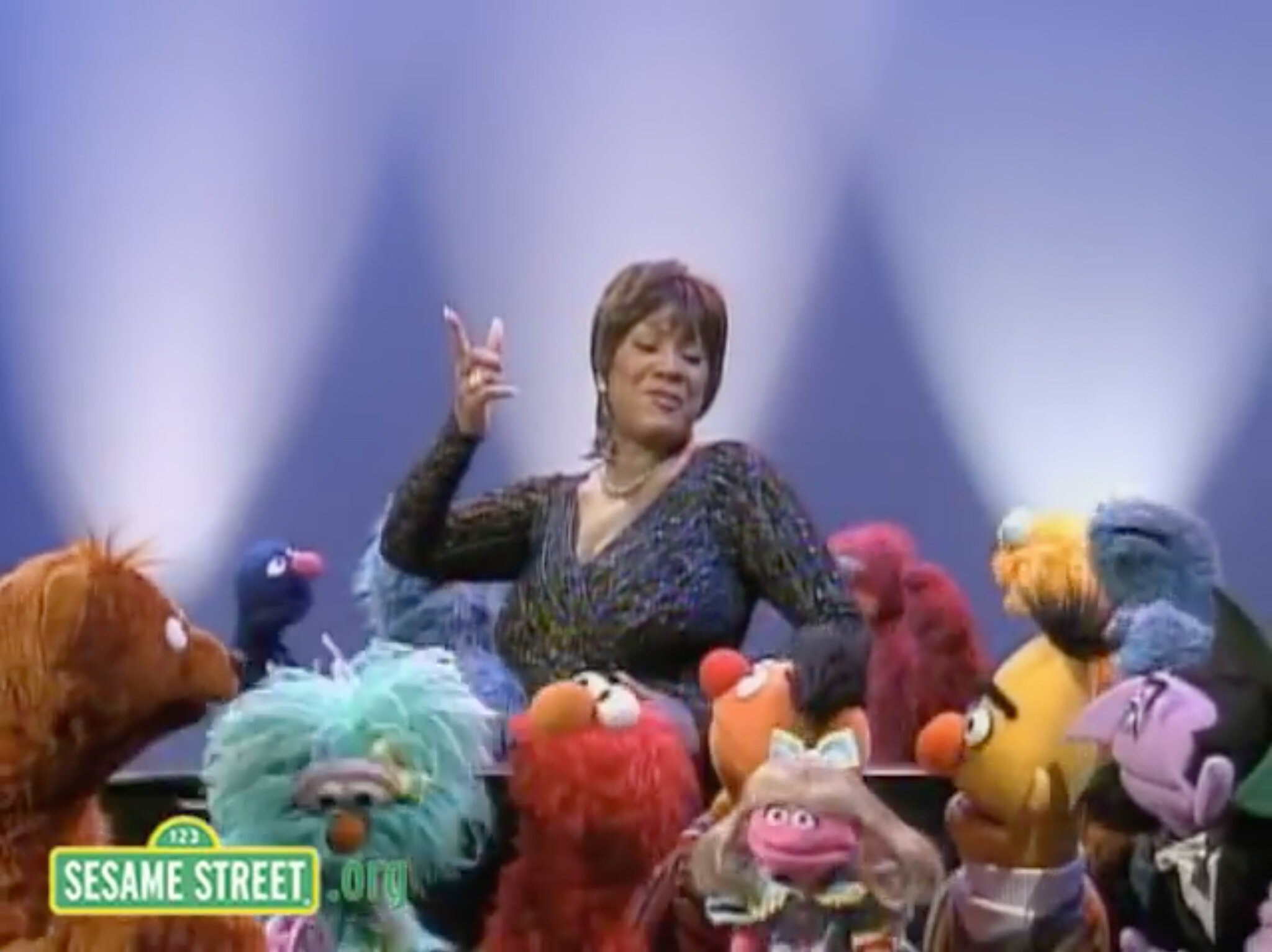 The artist sings the ABCs on a 1998 episode of “Sesame Street.”CreditCredit…Courtesy of Sesame Workshop

“I’ve been on ‘Sesame Street’ three times, but this is my favorite by far,” says LaBelle of her rendition of the ABCs. “I love that so many kids and younger people know me from this — and my own grandchildren get a real kick out of seeing me sing with all the characters!” As Mark Anthony Neal writes in his profile of the singer, LaBelle performed the song “with a fervor no one had ever had for the ABCs — and perhaps never will again.”

At Frank Sinatra’s 80th birthday party — a celebration that was held at the Shrine Auditorium in Los Angeles and televised for the public — LaBelle covered Sinatra’s “The House I Live In,” the titular song of his 1945 short film, made at the end of World War II to confront anti-Semitism and spread a message of tolerance and acceptance. Of her performance that evening, LaBelle recalls, “It was an amazing honor to be able to celebrate the legend himself and perform his song. It doesn’t really get any bigger than that. This is a performance I’ll always remember and treasure.”

“I loved everything about this show — performing with the beautiful orchestra and the phenomenal choir,” LaBelle says of her 1996 performance with the Boston Pops Orchestra, in which she sang Eric Clapton’s Grammy Award-winning ballad “Tears in Heaven” (1991), a song he wrote after the death of his 4-year-old son. “I’ve performed with other orchestras, but there was something special and magical in the air that night,” she remembers. 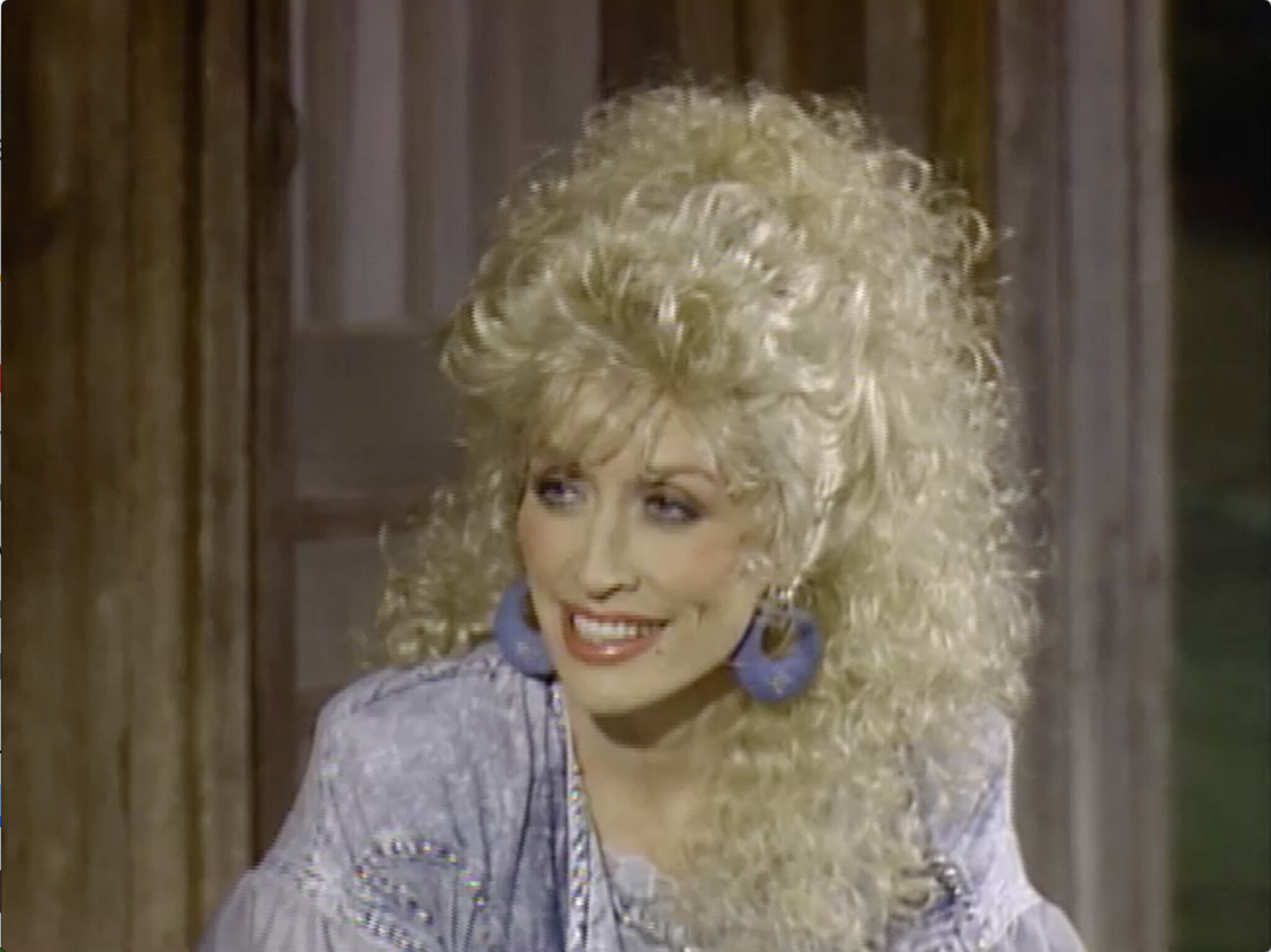 A clip from a 1987 episode of Parton’s “The Dolly Show.”CreditCredit…Courtesy of Time Life, from “Dolly: The Ultimate Collection”

“This is one little piece that I did years ago when I was doing my ‘Dolly’ special,” Parton says of “A Tennessee Mountain Thanksgiving,” a 1987 segment that aired on her variety show for ABC. “I had my mom, my dad and all my brothers and sisters on. My daddy was dancin’ a little bit, and Mama was talking … I’m a good cross between Mom and Dad: I got all my mama’s spiritual self — and all the creativity from that side. But my daddy was a worker, my daddy was a thinker, my daddy was a doer.”

“Kenny, who passed away recently, was such a great singer,” Parton says of her longtime collaborator and friend Kenny Rogers. “He’s a true stylist. I’ve always thought my voice blended so well with men, because they have that low voice, and mine is high — it almost makes a sound of its own.” Here, Parton and Rogers sing the classic country song “Blue Eyes Crying in the Rain” for a 1976 episode of “Dolly.” It was the first time the two had ever met.

On another episode of her variety show, Parton performed Linda Ronstadt’s “Silver Threads and Golden Needles” with Ronstadt and Emmylou Harris, marking their first televised appearance together. (The women would go on to release two studio albums, 1987’s “Trio” and 1999’s “Trio II,” and the 2016 compilation “The Complete Trio Collection.”) “When you’re singing with a great singer,” Parton says of her collaborations with singers like Ronstadt and Harris, “you want to be able to come up to their standards — you want to feel like you’re giving it your absolute best. They’re so good that I feel like they make me a better singer.”

A Lamb Tagine, Sweetened With Dates, for the First Days of Spring