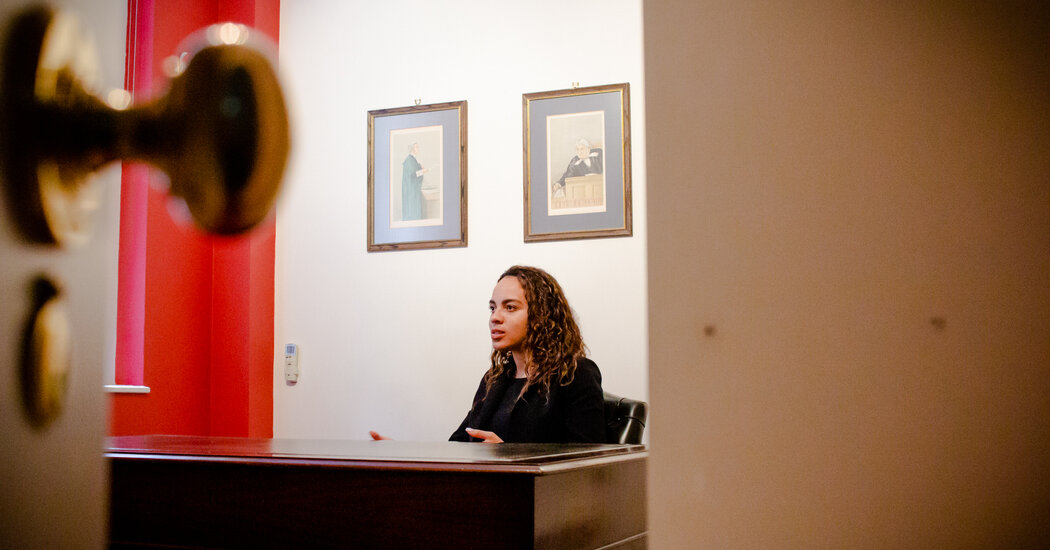 Alexandra Wilson is working to change England’s legal establishment, and perceptions about who belongs in it, from the inside.

Alexandra Wilson at her offices in London. “My ability is underestimated, quite a lot,” she said.Credit…Amara Eno for The New York Times

LONDON — It was looking like a typical day at the office for Alexandra Wilson as she arrived at a London courthouse ready to defend someone accused of theft.

She tied her hair into a neat knot, shrugged on her black robe and pulled on a white horsehair wig — the official garb of Britain’s barristers, the lawyers who argue most cases in court.

But once she was in the courtroom, things went off script. In a patronizing exchange that was rude at best and hostile at worst, the prosecutor, an older white man, scoffed at Ms. Wilson, chided her for speaking with her client and tutted at her requests for details on court documents.

Unfortunately, it was an all too typical day for Ms. Wilson in a profession where, as a young Black woman, she often finds herself fighting for recognition and respect.

“It certainly does happen to a lot of Black barristers,” she said after the encounter. “My ability is underestimated, quite a lot.”

Last month, in an incident that made headlines in Britain — and spurred a public apology from the acting head of the country’s court system — Ms. Wilson was shouted at for entering the court to defend her client, one of three times that day she was assumed to be a defendant.

Ms. Wilson wrote about the encounter in a Twitter thread that soon went viral, and said the incident underscored broader issues in the justice system.

“For me, it was a real insight that Black people are being criminalized from when they are first laid eyes on,” she said. “How can I reassure my clients that it’s a fair system if people are already making their mind up from seeing a Black person that you are likely to be a criminal?”

That is part of her drive to be here.

“I thought the best way to make a difference was to be a part of the system that is so problematic and to make change from the inside,” she said. “It’s one thing calling out all of the problems, but we need to actually think, ‘How are we going to solve this?’”

As the 25-year-old daughter of a Black Caribbean father and white British mother from working-class roots, she is still a rarity in the cavernous halls of England’s courts.

Her unabashed observations about race and class have drawn a following of thousands on Twitter, inspired a book about her experiences and driven her to found a community for Black women in the legal professions. Just over a year into her career, she’s only getting started.

A tweet she posted a few months before becoming a practicing barrister in early 2019 that included a photo of her in her official attire and the note “THIS is what a barrister looks like” was the first to draw attention.

A 2018 report from the Bar Standards Board noted that Black prospective barristers encounter significantly higher barriers to entering the profession than their white peers and are less likely to be taken on as trainees.

The result, Ms. Wilson noted, is criminal courtrooms where those in positions of authority are overwhelmingly white and defendants are disproportionately Black.

“If you’ve got an overrepresentation of Black people on the wrong side of the law, being pushed through the system,” she said, “and they don’t see any Black people representing them, how can they trust us?”

Ms. Wilson confronts the skewed dynamic head on in her book, “In Black and White,” a memoir that details her experience as a barrister and her journey to get there, while unpacking the issues of race and class in a justice system long dominated by rich white men.

She thinks the time is right for Britain to address racial inequality after the police killing of George Floyd in Minneapolis set off protests and a global conversation about race, including in Britain.

“I think we like to think of ourselves as this post-racial society where race doesn’t exist and we all live in racial harmony, and frankly, it’s not true,” she said.

She specialized in criminal and family law practice in the hopes of maximizing the impact she can make, and is a founding member of One Case at a Time, an initiative to fund and provide legal representation for people of color.

“We can’t just fool ourselves into thinking that everyone has the exact same life chances and everyone is on a level playing field, because they are not,” she said.

Ms. Wilson grew up the eldest of four children in Essex, an area of southeastern England bordering London. Her father is first-generation British, born in England to Jamaican parents who immigrated to the country with a wave of other workers from the Caribbean as part of the “Windrush Generation.” Her mother came from a British working-class family and grew up in public housing.

Both went on to received their college degrees as adults and are both now teachers, and Ms. Wilson credits her own ambition and perseverance to them.

When she was 17, the death of a close friend who was stabbed in London in a case of mistaken identity forced her to take a hard look at the system.

“For me, that was the first time I really started to appreciate how important color was,” she said, “because I had absolutely no doubt if he had been white, he wouldn’t have been killed that day.”

She followed his case through the courts and began to look into other cases, too. After his death, she knew she wanted a career that allowed her to address racial inequities in the justice system.

Yet she had to fight for her place every step of the way. When she told teachers that she wanted to apply to the University of Oxford, one told her mother that she was “too ambitious.”

When she graduated from Oxford — after studying in classrooms where she was often the only Black student — and applied for a legal traineeship, peers told her it would be impossible. And when she became a barrister, they said she wouldn’t fit in.

But last year, when she picked up the formal garb of her new profession — her new wig in a tin case with “Alexandra J. Wilson” in gold lettering on the front — with her grandmother by her side, she knew they were wrong.

Now, she wants to lift up other women of color who are making their way into the profession. This year, she founded Black Women in Law, a community for aspiring lawyers and women already in the field. The group has close to 600 members who connect for conversations, advice and mentoring and organizes online events for schools.

“It’s so important that kids see Black female lawyers,” Ms. Wilson said. “I didn’t, and I wanted to.”