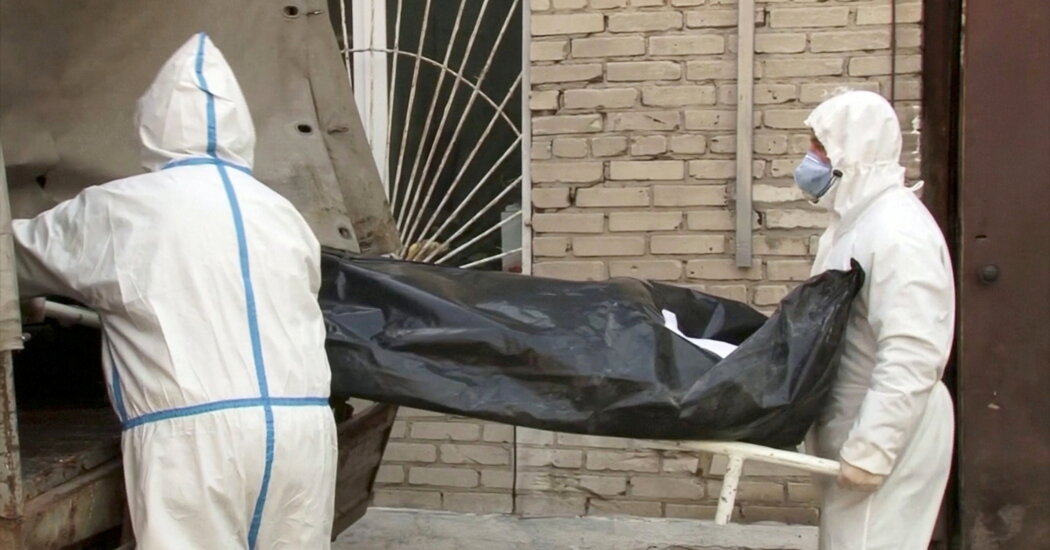 Overall, Russia’s health care system is coping with a fall surge in cases, but bodies are piling up in overwhelmed regional hospitals and morgues.

Outside a hospital morgue last week in Barnaul, Russia.Credit…Tolk Channel, via Reuters

MOSCOW — One video shows bodies in plastic bags stacked in the basement of a hospital in the Siberian city of Barnaul after a morgue overflowed.

“Well, this is how it is,” said a voice on the video, one of dozens posted anonymously by desperate hospital workers amid a surge of Covid-19 cases in provincial Russian cities. “We’re overloaded.”

During the spring, the pandemic struck Moscow particularly hard while mostly sparing provincial locations. But now infections are rising in several of Russia’s far-flung regions, and hospitals and morgues are overwhelmed.

In his long tenure, President Vladimir V. Putin has centralized political power. But during the pandemic, he has delegated to regional authorities decisions on locking down businesses, shutting schools and taking other public health precautions.

The stated purpose was to allow local officials to tailor their responses to local circumstances, though political analysts also noted that it allowed Mr. Putin to deflect blame for unpopular shutdowns, or bad outcomes. Either way, the result has become a patchwork of rules throughout the country that are often poorly observed.

Image President Vladimir V. Putin has delegated much of Russia’s decision-making about the pandemic response to regional officials.Credit…Sputnik, via Reuters

Russia has reported 1,579,446 cases, the fourth-highest number in the world, after the United States, India and Brazil. On average over the past seven days, 16,546 people have been infected daily.

Russia approved a vaccine for the coronavirus in August, before completing clinical trials, but it has not been administered widely. In Moscow, the health authorities said Friday that about 2,500 people in the city had received the vaccine under emergency-use approval.

In testimonials and videos from Russia’s regions, some harrowing accounts are emerging.

In Novokuznetsk, a Siberian coal mining town, a morgue worker posted a video in which he appeared to walk on bodies in bags. They were so tightly packed in a corridor that there seemed no other way to get through.

Stacked on the floor and piled on stretchers, a dozen or so were visible. One body was simply placed on the floor under a blanket, a pair of women’s shoes protruding.

“This is the hallway,” said the worker, who did not identify himself. “There are corpses all over. You can fall down walking here, you can trip over them. I have to walk on their heads.”

In Barnaul, a city of 625,000, the regional authorities acknowledged a problem but blamed a third-party supplier of hearses used to transport bodies for burial.

“Indeed, in the hospital there is some delay in removing the dead patients,” the regional health authority said in a statement carried by Russian news agencies. “Outside companies provide this service for medical organizations, and they are not coping with the volume.”

In Novokuznetsk, the Health Department issued a statement saying the morgue had overflowed because many families of the dead had also fallen ill and were not able to retrieve the bodies for burial.

The authorities were building new shelves to accommodate the bodies, the statement said.

In Blagoveshchensk, a city in the Far East on the border with China, a local journalist, Natalya Nadelyaeva, described in despair having to wait in line at a morgue to pick up the body of her grandfather, then wait in another line at a funeral home to arrange burial. “The undertakers told me they just don’t have enough crews to bury everybody on time,” she said.

Overall, Russia’s reported mortality rate of 19 per 100,000 people is lower than that of most West European countries and the United States. One explanation is that wide testing in Russia turns up many mild or asymptomatic cases. But there have also been indications that mortality has been underreported.

In St. Petersburg, a news site, Fontanka.ru, reported Friday that it had obtained a document from the city’s crematorium seeming to contradict the official death count from Covid-19. The document, called the “Account of Acts of Cremation of Bodies Infected with the New Coronavirus,” listed 2,194 more cremations than reported deaths from the virus from April until October, the site calculated.

Pileups have hit hospitals as well as morgues. In Omsk, a Siberian industrial city, two ambulance drivers this month picked up a 70-year-old woman and an 85-year-old man with severe Covid-19 symptoms but could find no hospitals with free beds. After being turned away by multiple emergency rooms over 10 hours, they parked outside the regional Ministry of Health in protest, with their ailing patients still aboard.

Earlier this week, Dmitri S. Peskov, the Kremlin spokesman, sharply criticized regional leaders in Omsk over the ambulance debacle. “It would be better if the situation never came to this,” he said. “When problems arise, it’s necessary to get a quick reaction, most of all from the regional leaders.”

Mr. Peskov noted some resignations of local politicians related to breakdowns in the coronavirus response in Omsk and in Rostov-on-Don, where a criminal case has been opened after 20 patients died in a hospital because it ran out of oxygen for their ventilators.

In a separate incident on Saturday, the oxygen supply of a hospital in the Ural Mountain city of Chelyabinsk exploded, forcing the evacuation of 158 patients in a coronavirus ward, three of whom were on ventilators, in the ensuing fire. Two floors of the hospital burned.

Local news media reports said that two patients had died. But the regional governor, Aleksei Teksler, told the Tass news agency that the two had died earlier on Saturday from Covid-19, not from the disruption in the oxygen supply or during evacuation, and that their bodies had been in the intensive-care unit when the explosion occurred, causing the confusion.

At a cabinet meeting on Wednesday, Mr. Putin discussed the rising cases in the Russian regions but said he did not plan a national lockdown. “We have to keep our hand on the pulse and react in time and effectively,” he said. Cities with high case counts have closed schools and asked businesses to voluntarily send employees home.