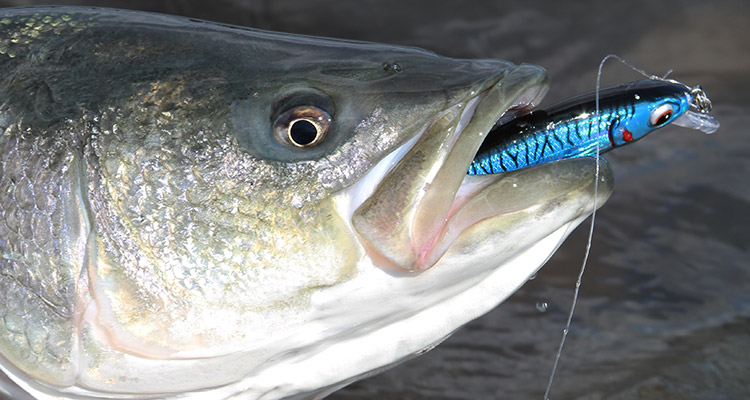 After years of asking, anglers finally have options when it comes to big minnow swimming plugs.

My search has been going on for many years to find one fishing lure that wound consistently catch year after year. Not only numbers of striped bass but large striped bass. Well, I think I found it.

Back in the early 1990s, I spent much of my time fishing the back bays of New Jersey, stalking the sod banks and the hard-flowing waters of the Intracoastal Waterway, where smaller baits like grass shrimp, spearing, juvenile bunker, and mullet would spend the summer.

All these baits would get swept into the main channel from the many tidal creeks, and striped bass would be lying in wait. My most productive presentations were small 4 1/2-inch Bomber Lures and 4-inch Yo-Zuri Mag Darters. The fish, most of which ranged from 24 to 32 inches, could not resist them. I even caught stripers to 38 inches on these small lures.

In the mid-to-late-90s, my home waters started to get a better run of striped bass on the ocean side, in the surf and inlets. Given the much different conditions in the bigger water, I needed larger lures. So it was time to step up the size of my lures. I turned to the 5-inch, 1-ounce Yo-Zuri Mag Darter.

One night in particular walking out the dunes to one of my favorite places to fish in the middle of the night where very few if any other fishermen around. I was greeted with a stiff northeast wind in my face and large waves breaking pretty over the sand bar. Unable to wade out to the sandbar in those conditions, I noticed that to the south, there was a hole between the sandbar and the beach with enough water in it to possibly hold fish. As the waves crashed over the bar, I guessed that stripers could be sitting on the inside, waiting for a free meal to be washed into the trough. I clipped on a new, “Ghost Black” 5-inch Mag Darters and preceded to catch more than 60 striped bass one after another, casting the lure into the wind and swimming into the feeding zone. By the end of the outing, there wasn’t any paint left on the lure.

A striper caught on a Daiwa SP Minnow.

After that night, I longed for a larger lure with the qualities of the Mag Darter that might provide the opportunity to catch larger fish in even nastier weather. Qualities such as the internal weight-transfer system, the consistent swimming depth of 3 to 5 feet, and the heavy-duty construction.

Many fellow fishermen felt the same at the time, and dreamed of what we could accomplish with a longer and heavier weighted version. A few custom lure builders made their own versions, but these were difficult to get, and while I caught some of my largest fish ever on them, I was always afraid of losing them, because of the difficulty in replacing them.

Around 2017, a number of companies began producing larger minnows: Daiwa came out with a 6 ¾-inch version of the popular SP Minnow; Shimano had the larger Coltsniper Jerkbait that measured just under 7 inches and weighed nearly 2 ounces; Bomber produced the Long Shot at 7 inches; and Yo-Zuri produced a larger size of the Mag Darter at 6.5-inches and 2-ounces. All of these had internal weight transfer systems, rugged through-wire construction, and big fish appeal.

[Video: How to Rig the Daiwa SP Minnow for Big Stripers]

What Started as a Joking Bake-off Between Dads Led to 15,000 Cookies Being Delivered to Essential Workers

Happy Holidays From On the Water!

False Albacore Records – On The Water