Hidden in Plain Sight: The Ghosts of Segregation 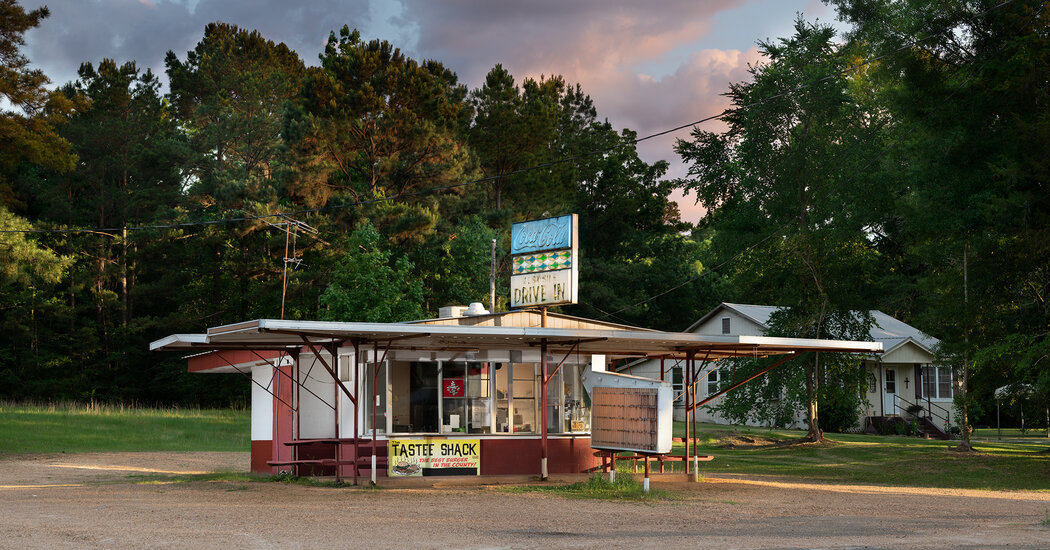 The six faded letters are all that remain, and few people notice them. I would never have seen them if a friend hadn’t pointed them out to me while we walked through New Orleans’s French Quarter. I certainly wouldn’t have realized their significance.

On Chartres Street, above a beautifully arched doorway, is a curious and enigmatic inscription: “CHANGE.” Now part of the facade of the Omni Royal Orleans Hotel, the letters mark the onetime site of the St. Louis Hotel & Exchange, where, under the building’s famed rotunda, enslaved people were once sold.

All human landscapes are embedded with cultural meaning. And since we rarely consider our constructions as evidence of our priorities, beliefs and behaviors, the testimonies our landscapes offer are more honest than many of the things we intentionally present.

Our built environment, in other words, is a kind of societal autobiography, writ large.

The old Greyhound bus station in Jackson, Miss. The station was the site of many arrests in 1961, when Freedom Riders rode interstate buses into the segregated South. The E. F. Young Jr. Hotel in Meridian, Miss. The hotel, owned and operated by Mr. Young, provided lodging for Black travelers who were excluded from other hotels during the Jim Crow era.

Several years ago, I began to photographically document vestiges of racism, oppression and segregation in America’s built and natural environments — lingering traces that were hidden in plain sight behind a veil of banality.

Some of the sites I found were unmarked, overlooked and largely forgotten: bricked-over “Colored” entrances to movie theaters, or walls built inside restaurants to separate nonwhite customers. Other photographs capture the Black institutions that arose in response to racial segregation: a Negro league stadium in Michigan, a hotel for Black travelers in Mississippi. And a handful of the photographs depict the sites where Black people were attacked, killed or abducted — some marked and widely known, some not.

I called the project Ghosts of Segregation.

On Jan. 3, 1966, Sammy Younge Jr., a 21-year-old Black college student, was murdered for trying to use this bathroom — then reserved for white customers — at a service station in Tuskegee, Ala.

The small side window at Edd’s Drive-In, for example, a restaurant in Pascagoula, Miss., appears to be a drive-up. It was actually a segregated window used in the Jim Crow-era to serve Black customers.

The locked black double doors aside Seattle’s Moore Theatre might be mistaken for a service entrance. In fact, this was once the “Colored” entrance used by nonwhite moviegoers to access the theater’s second balcony.

At far right, the onetime “Colored” window at Edd’s Drive-In, in Pascagoula, Miss. A onetime “Colored” restroom in Tylertown, Miss. The 16th Street Baptist Church in Birmingham, Ala., which was bombed by members of the Ku Klux Klan on September 15, 1963, killing four girls and injuring many others.

These sites surround us, but finding and verifying them requires months of due diligence.

Many of the places I’ve photographed were found after conducting research online, in person and on location. I have reached out to scholars, historians and ordinary people who might share their insights, experiences and suggestions. Local libraries and museums often guide me to forgotten places. Historical preservation websites and publications such as The Oxford American, The Clarion-Ledger and many other news sources add immeasurably to my understanding.

Formerly a Tastee-Freez, this site in Meadville, Miss., was the last place Charles Eddie Moore and Henry Hezekiah Dee were seen alive. The two Black men, both 19, were abducted by Ku Klux Klan members, tortured and drowned in the Mississippi River in 1964.

In 2018, I was perusing the website for the Seattle Civil Rights & Labor History Project, which led me to a theater company site that mentioned the Moore Theatre’s segregated entrance. Another site, historylink.org, helped confirm the nature of the door and identify its precise location. Google Street View allowed me to get a sense of its relatively current state.

The very existence of the door shocked me. I had walked past it countless times over the 40 years I’ve lived in Seattle, never giving it a thought. It wasn’t until the summer of 2020 that the tragic nature of this obscure door resonated with the sobering reminder on the marquee.

After being tipped off by a contributor to a website called Preservation in Mississippi, I verified the history of the window at Edd’s Drive-In with the manager, Becky Hasty, who told me that the owners had retained it as a reminder of the past. “If we don’t remember where we’ve been,” she said, “we might get lost again.”

Foster Auditorium at the University of Alabama, in Tuscaloosa. The auditorium was the site of the Stand in the Schoolhouse Door, Gov. George C. Wallace’s infamous attempt to block the entry of two Black students, Vivian Malone and James Hood, and stop the desegregation of Alabama’s educational system.

Slavery is often referred to as America’s “original sin.” Its demons still haunt us in the form of segregated housing, education, health care, employment. Through these photographs, I’m trying to preserve the physical evidence of that sin — because, when the telling traces are erased, the lessons risk being lost.

Many of the locations I’ve documented have already disappeared. The painted sign for Clark’s Cafe in Huntington, Ore., which trumpeted “ALL WHITE HELP,” was destroyed shortly after I photographed it. The Houston Negro Hospital School of Nursing has since been demolished.

A sign for Clark’s Cafe in Huntington, Ore., trumpeted “ALL WHITE HELP.” The building was damaged in a fire in 2019, and the wall has since been destroyed. Inside the Victoria Colored School, in Victoria, Texas. Medgar Evers’ house in Jackson, Miss., where Mr. Evers was assassinated after exiting his car in 1963.

I often wonder: Does such erasure remedy the inequalities and relieve the suffering caused by systemic racism? Or does it facilitate denial and obfuscation?

A technical note on the images themselves: Each picture in this series is composed of hundreds of separate overlapping photographs, which I later merge together. The technique, commonly referred to as “stitching,” allows me to produce highly detailed and immersive prints.

The exposures are made from a single vantage point with a camera mounted on a panoramic head, atop a stationary tripod. The structural integrity of the scene is of paramount importance, since the photographs are meant to be precise documentation of erasable evidence. If you were to stand beside me and photograph the scene with your smartphone, our pictures would look similar, though mine would contain greater detail and more nuanced light.

A “segregation wall,” built to separate customers of color, at the Templin Saloon in Gonzales, Texas. The wall was left standing to remind patrons of the saloon’s history. The Ellis Theatre in Cleveland, Miss. The door on the left was the segregated entrance to the “Colored” balcony. The door on the right was the entrance to the “Colored” restroom.

These photographs are less about the places themselves and more about the people who once populated them. My goal is to heighten awareness, motivate action and spark an honest conversation about the legacy of racial injustice in America.

This two-level metal stairway at the Paramount Theatre in Clarksdale, Miss., offered access to the “Colored” sections of the balconies.

The photographs are also a testament to the endurance of the racial inequalities that have plagued American society, projected backward and forward in time.

The deaths this year of George Floyd, Breonna Taylor and Ahmaud Arbery, among many other Black Americans, prompted a long-overdue national reckoning, spurring one of the largest movements in U.S. history.

And these pictures prove that if you look carefully enough, you’ll find that the evidence of the structures of segregation — and the marks of white supremacy — still surrounds us, embedded in the landscape of our day-to-day lives.

Bryant’s Grocery & Meat Market in Money, Miss., where, in 1955, 14-year-old Emmett Till was accused of whistling at a white woman. He was later kidnapped, tortured, lynched and dumped in the Tallahatchie River.

Cases of Unruly Airline Passengers Are Soaring, and So Are Federal Fines