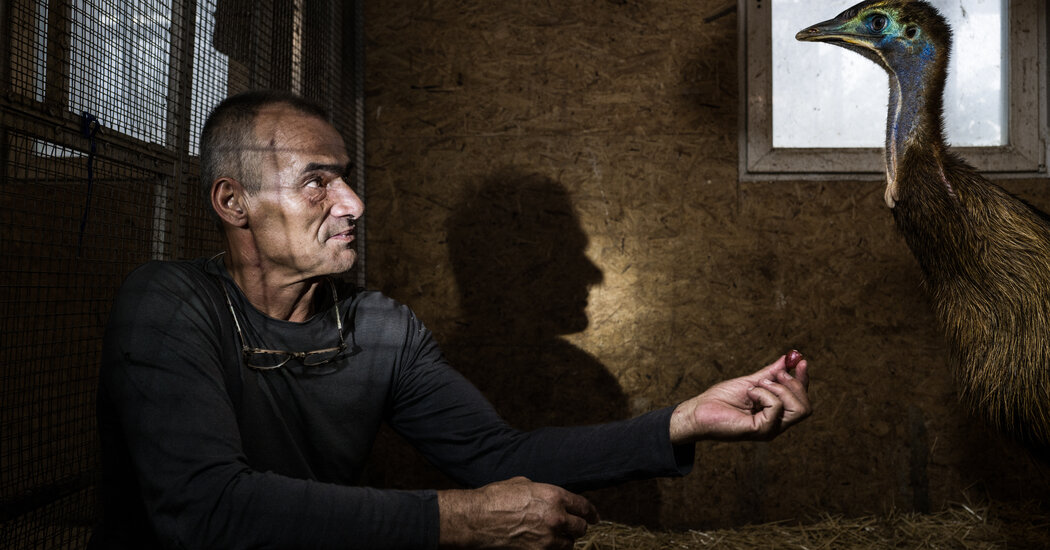 After a chance encounter in Brazil, Johann Zillinger became one of the world’s most prolific wildlife smugglers. Three decades and two prison stints later, he says he has gone straight.

Johann Zillinger feeding a grape to a young cassowary, one of the birds he most prizes.Credit…Marylise Vigneau for The New York Times

WEIDEN AN DER MARCH, Austria — On a humid evening at the airport in Fortaleza, in northern Brazil, Johann Zillinger, a wildlife trafficker, was keeping a close eye on his new hire. He had recruited the 24-year-old farmhand as a smuggler a few days earlier, promising him a free trip to Europe and $2,000 in cash.

But the young man was sweating profusely, and Mr. Zillinger worried that he might raise suspicions. At length, he decided to go ahead. “I gave him two lines of coke and said, ‘Let’s go.’”

Mr. Zillinger himself had no need of drugs. Always dressed like a businessman, he had sauntered through security and passport checks scores of times, the thousands of exotic birds he was trafficking undetected.

But on that evening in 2002, customs agents in Fortaleza, acting on a tip, found 47 eggs of endangered parrots stuffed in nylon stockings and wrapped around the two men’s midsections. The agents also discovered 20 live birds in the bag of a third accomplice.

A photo in a local newspaper shows the young hire covering his face. Mr. Zillinger stares straight into the camera. In the accompanying article, Interpol agents describe him as one of the world’s biggest wildlife traffickers, a wiry Austrian who, on that day alone, admitted to smuggling wildlife worth more than $350,000.

The multi-billion-dollar wildlife trade is the primary reason for species extinction, according to a study by U.S. and British scientists. But Mr. Zillinger said that for him, it was never about the money. Rather, he wanted to breed some of the world’s most elusive birds. The birds are an addiction, “like smoking, like drinking coffee or alcohol,” he said.

His drive was undeterred by the four months he spent in a rural Brazilian jail cell after his arrest, his amenities reduced to a bucket. He returned to the infamous trade and said he had stopped only recently and was now busying himself with breeding rare species and building a zoo.

The first time we met at his modest house in the Austrian countryside, Mr. Zillinger reached for a small teacup in a glass cabinet, an improvised nest for a featherless chick. It was screaming to be hand-fed. Caring for birds was instilled in him by his father, a roofer and avid breeder of messenger pigeons, who gave him two white cockatoos when he was a teenager.

“They are pickier than humans,” Mr. Zillinger said as he pushed a syringe with bird formula down the chick’s beak. Parrots are sensitive animals, particularly about their lifelong partners. In captivity, many never raise offspring.

But Mr. Zillinger’s cockatoos were a match. The moment the first chick broke through its shell, he was hooked. “It was like winning the lottery,” he said, beaming.

Image Mr. Zillinger’s favorite bird, a wattled ibis, a species found only in Ethiopia and Eritrea. Credit…Marylise Vigneau for The New York Times

He fell into trafficking rare birds by chance. Adventurous and in his late teens, he was eager to meet sun-tanned women on Rio de Janeiro’s Copacabana Beach when an encounter with a fellow parrot aficionado from Switzerland changed his path.

Mr. Zillinger recalled the proposal: Smuggle birds back to Europe, your trips will be paid for and you can keep some to breed. They struck a deal.

He climbed to the nests of hyacinth macaws in the Pantanal wetlands and persuaded Indigenous communities of the arid caatinga region of northeastern Brazil to show him the world’s last Lear’s macaws. Sometimes, he dug a hole and climbed in, covering it with bamboo, leaves and sweet fruit. “When the bird landed on it, you grabbed it and pulled it down.”

In the early years, Mr. Zillinger was able to get the birds through customs in Brazil by greasing some palms. Over time, though, airport officials’ demands rose too high, Mr. Zillinger said, and he focused on eggs. Strapped to his body, the eggs would keep warm crossing the ocean to Portugal, where he would transfer them from human to conventional incubator. The hardest part, he said, was not cracking them. “That’s the 10 percent we lost, but other than that, it was foolproof.”

Over the years, Mr. Zillinger grew estranged from his three biological children and their mothers, and even his four siblings. Following the Fortaleza arrest, he moved his Brazilian wife and her two children to Austria. She left him shortly after. They have since divorced.

Around that time, Brazilians and Portuguese were dominating the egg smuggling routes to Europe. But once the eggs were hatched, the traffickers still had the problem of proving the birds had not been smuggled into Europe.

The key to laundering animals, Mr. Zillinger said without irony, is the Convention on International Trade in Endangered Species (CITES), a treaty adopted in 1975 to ensure that the legal trade in wildlife does not drive threatened species to extinction. Those can be traded only if they fall under one of many exceptions. The crucial exception for traffickers was captive breeding.

Mr. Zillinger and other traffickers found that they could obtain a valid CITES document to disguise smuggled animals as captive bred. They simply needed to claim that they were, and, after all but the most incredible claims, officials would issue paperwork declaring wild, trafficked birds to be born in captivity. CITES officials have admitted that such documents were wrongfully issued.

Together with Europe’s removal of borders beginning in 1995, Mr. Zillinger said, “that opened the floodgates.”

He says his work was largely financed by a well-to-do Viennese doctor with a love for palm cockatoos and hyacinth macaws, while he served as a courier for customers and middlemen across Europe, all willing to pay tens of thousands of dollars for rare parrots.

He laughed at comparisons to other smuggling crimes. “Why would anyone traffic drugs or weapons? They’re idiots. With wildlife, the profits are much higher, and there’s no risk.”

Almost no risk, that is. Five years ago, on a two-lane highway in Portugal, Mr. Zillinger was pulled over for what appeared to be a random traffic stop but was in fact the climax of a monthslong investigation.

Mr. Zillinger transporting one of his African spurred tortoises among his newly built aviaries.Credit…Marylise Vigneau for The New York Times

From surveillance, the police knew he was transporting two Lear’s macaws, crouched in a box hooked to his sedan’s cigarette lighter, the temperature set to a tropical 100 degrees Fahrenheit. As few as 250 of these parrots remain in the wild, leaving the market price up to the highest bidder. Mr. Zillinger bought them for about $8,000 each, but said they would resell for several times that.

In wiretapped calls to his then-girlfriend that emerged in the subsequent trial, Mr. Zillinger displayed a range of emotions, from flustered and annoyed to a solemn realization that he was “definitely finished.” He gave instructions to alert his associates, then ended the last call from the back of a police car. “Kisses, and goodbye,” he said, humbled and dispirited.

The court in Lisbon found him guilty of trafficking, along with three Portuguese associates. After almost a year in prison there, he decided to quit the business. But, Mr. Zillinger says, that turned out to be harder than he thought. His financier, demanded he return to work or pay back $35,000 in operational costs.

“He was in too deep, and he wanted to get out,” said Thomas Engel, a Harley-riding Austrian customs agent. It took him six hours to write down Mr. Zillinger’s testimony, which launched multiple, extensive investigations — search warrants for several properties; almost 100 confiscated, highly valuable parrots; wiretaps; and more than 50 binders of case files.

His former financier, who did not respond to requests for comment, was convicted under Austrian law of wildlife trafficking and trafficking in protected species and fined $43,200. “Do you think that matters to someone who makes half a million a year?” Mr. Zillinger asked.

Most days, Mr. Zillinger keeps busy with his latest endeavor, the construction of a small zoo.

“These capuchinbirds,” he said, pointing at a bird with a bare, dull blue head, “I’ve got four males. And what can you breed with four males?” But if he gets a zoo license, he would have access to animals that individual breeders can’t get legally, like female capuchinbirds.

Through a corridor, he passed a trophy-like row of enclosures with his birds — all legal, he stressed — stopping to show his most prized possession, three young cassowaries, large, flightless birds, capable of slicing open predators — or humans — with their thick, four-inch-long claws.