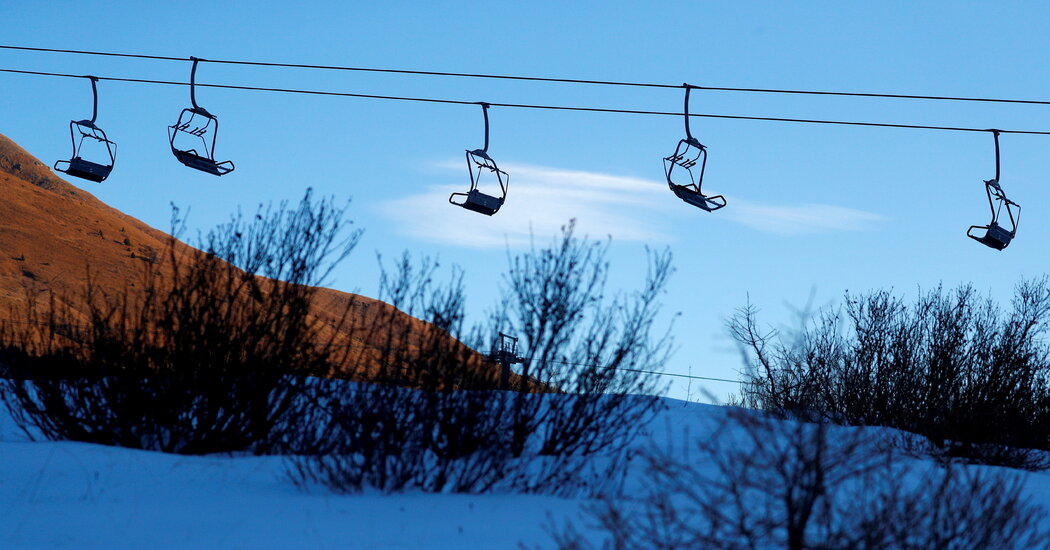 Leading up to the Christmas season, France, Germany and Italy will keep slopes shut, but Austria and Switzerland have vowed to reopen theirs, in Europe’s latest struggle to coordinate a pandemic response.

A closed ski lift on Thursday at the Passo Tonale resort in the Dolomites region of Italy.Credit…Guglielmo Mangiapane/Reuters

Weeks before the coronavirus pandemic swept across Europe in February, some of the first virus clusters on the continent appeared in ski resorts in the Alps, leading to cascading outbreaks as ski enthusiasts returned home.

Now, with the Christmas holiday season in sight, leaders in France, Germany and Italy indicated this week that ski slopes would remain closed at least until the end of the year, wary of repeating the waves of infections fueled by negligence in the early days and relaxed restrictions over summer.

Yet with Austria and Switzerland vowing to reopen their resorts, a high-altitude rivalry is once again putting to the test attempts by European countries to coordinate their response to the pandemic when it comes to tourism.

European nations have for months struggled to adopt a unified response, each imposing their own restrictions. And while many imposed new lockdowns this month, some, like France, are easing restrictions ahead of the holidays. Poland and Hungary also blocked a landmark agreement forged by the European Union to raise a 750 billion euro ($894 billion) relief fund.

European tourism has been hit hard by the pandemic, with up to 11.5 million jobs in the sector at risk, according to the European Commission, the European Union’s executive arm.

Chancellor Angela Merkel of Germany has called for a European Union-wide ban on ski tourism, and President Emmanuel Macron of France has argued that the risks linked to the coronavirus make it impossible to allow winter sports. Prime Minister Giuseppe Conte of Italy said the winter holidays would lead to a third wave of infections and called for a coordinated response by at least these three countries.

But the inconsistent restrictions across the Alps have already created tensions.

Chancellor Sebastian Kurz of Austria has called efforts to coordinate the closing of ski resorts “exaggerated,” pointing out the European Union has no say in how member states handle sports.

On top of increased risks of widespread coronavirus infections during the winter holidays, the authorities in France fear that ski-related injuries could overwhelm health care facilities that fared better during the second wave of the pandemic than in the first.

Amid the first wave, many Alps resorts remained open until mid-March. The ski and party hub of Ischgl in western Austria did so even after the authorities in Iceland informed Austria’s health ministry that a group of returning tourists had been infected there.

A consumer group is suing the Austrian government for damages on behalf of several dozen people who said they were infected with the coronavirus in Ischgl because the authorities did not respond quickly enough.

A report commissioned by the state of Tyrol found that “grievous miscalculations” on the part of local authorities in Ischgl and “miscommunication” by Mr. Kurz contributed to the outbreak in the ski resort. Ischgl’s mayor, Werner Kurz, who is not related to the chancellor, has insisted that the authorities in the town followed all of the health authorities’ instructions.

“There was nothing more we could do,” he said.

Only professional skiers and members of ski schools are currently allowed to train on Italy’s slopes.Credit…Marco Bertorello/Agence France-Presse — Getty Images

Markus Söder, the governor of Germany’s southern region of Bavaria, which neighbors Austria, said it was vital not to overlook the risks involved. “Half of Europe was infected through Ischgl in the spring,” he said. “This is no joke.”

Yet the town has already said that its ski season will begin in mid-December with safety measures in place.

Franz Hoerl, the chairman of the Austrian cable car association and a lawmaker in the Tyrol region, where Ischgl is located, said that the major outbreaks in the spring originated not in ski lifts or on the slopes, but in post-ski parties. He said in an emailed statement that such gatherings would not be allowed this winter.

Germany’s more than seven million skiers make up an essential part of Austria’s ski industry, with many heading across the border on regular weekend day trips. But Mr. Söder said that anyone crossing even for a day would be subject to Germany’s quarantine regulations for travelers coming from high-risk areas, which includes all of Austria.

For many, the ski season is seen as a critical test. Winter tourism generated €14.9 billion for Austria last year, according to government statistics, and the authorities hope that one of the strictest lockdown in Europe, introduced this month, will drive down the number of infections enough to guarantee a safe holiday season. Austria, which currently has one of the highest infection rates in Europe, is also set to start the continent’s largest mass-testing program next week.

In France, where restrictions are being gradually lifted starting this weekend, the authorities said that ski resorts — but not ski lifts — would be allowed to open. “Everybody is free to travel to resorts to enjoy the clean air of our beautiful mountains,” Prime Minister Jean Castex said at a news conference on Thursday.

The decision to keep lifts closed has sowed anger and confusion among tourism and ski professionals, who say that the Christmas holiday season amounts to up to a quarter of the French industry’s €11 billion annual revenue.

Cyprien Durand, the head of ski instructors in the village of Megève, near the Swiss border, said professionals had worked for months to adapt their resorts. He called the government’s decision “incoherent and destabilizing.”

“Like everyone else, we’ve learned from the first wave,” Mr. Durand said in a telephone interview. “Winter sports mean open air, and for the lifts, we’ve done enough to make sure social distancing measures will be respected.”

Mr. Durand, who manages 360 ski instructors, said he and his colleagues would try to organize other activities like cross-country skiing and snowshoe hiking.

“We’ll welcome visitors who still want to come,” he said.

European tourism has been hit hard by the pandemic, with up to 11.5 million jobs in the sector at risk.Credit…Marco Bertorello/Agence France-Presse — Getty Images

Across Italy’s mountainous regions, too, officials proposed guidelines, including a 50 percent capacity on cable cars and other protocols, which they say will allow facilities to reopen safely. But Mr. Conte, the prime minister, said that even if ski facilities enforced safety measures, “everything that surrounds them is uncontrollable.”

Laura Magoni, a former Olympic skier and the tourism official for Italy’s northern Lombardy region, said that the decision to close ski facilities would be the “tombstone” of many areas that rely on the mountain economy.

At the border from Switzerland — which is not part of the E.U. and said it would keep its resorts open — Italian business owners said they felt disadvantaged.

“On one side, you see people skiing,” Matteo Zanetti, the president of a cable car company in the border town of Cervinia, said in a telephone interview. “And on the other side, you see the desert.”

While Austria, France, Italy and Switzerland are home to some of Europe’s largest ski resorts, elsewhere on the continent, Spain and Bulgaria said they would let ski resorts open for the winter season. Slovenia said it was awaiting recommendations from the European Commission, which in turn said it was up to member states to decide.

Mr. Zanetti said he worried for the families of ski teachers, alpine guides and ski rental owners whose main sources of revenue will dwindle in the coming months if resorts remain closed.

“These people tied their life to the mountain,” he said.