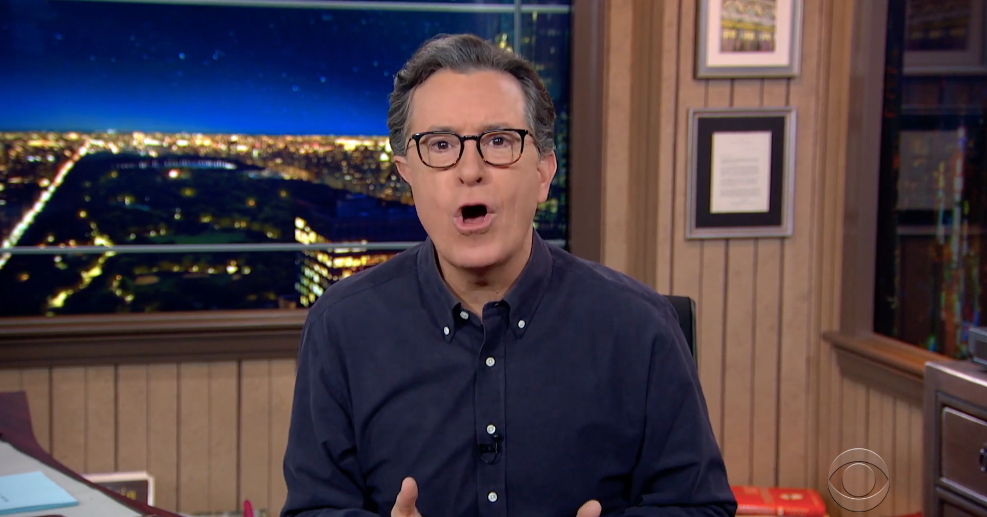 Colbert made a game out of the speculation about presidential pardons: “You have to match the person to their crime, and there are no wrong answers.”

Stephen Colbert mused about what Trump associates might be pardoned for: “Jared Kushner has long been suspected of shady financial dealings. Plus he’s obviously Slender Man.”Credit…CBS

President Trump is reported to have discussed the possibility of granting pre-emptive pardons to three of his children, his son-in-law Jared Kushner and his personal lawyer, Rudy Giuliani.

On “The Late Show,” Stephen Colbert made a “fun criminal activity page” out of it, inviting viewers to match the person in Trump’s circle to his or her alleged malfeasance.

“On the left, you see all of the potential pardon-getters, and on the right, there’s a list of crimes, like money laundering, tax evasion and snorting coke off the last living black rhino. You have to match the person to their crime, and there are no wrong answers.” — STEPHEN COLBERT

“Of course, it’s not just Rudy and the kids. Several of the president’s allies have begun a campaign to petition the West Wing in hopes of securing pardons. One White House source says, ‘You won’t believe the amount of calls, some insane, we’ve gotten.’ Oh, I believe you’re getting a lot of calls. What I don’t believe is that only some of them are insane.” — STEPHEN COLBERT

“But it does lead to one obvious question: What are they guilty of? For some of them, it’s pretty easy. Jared Kushner has long been suspected of shady financial dealings. Plus he’s obviously Slender Man.” — STEPHEN COLBERT

“I don’t believe Eric has violated any laws, but he’s still grateful to get a pardon. [imitating Eric] ‘This is the best Christmas gift that my dad has ever given me. Also, the only Christmas gift.’” — STEPHEN COLBERT

“Aw, guys, that is adorable. Trump is pardoning his kids and his house pets.” — TREVOR NOAH

“And he’s not even pardoning them for anything specific. Trump is just handing out pardons like they’re gift cards: [as Trump] ‘I figured I’d let you pick your own crime, so enjoy. Do something crazy, you know? Live a little.’” — TREVOR NOAH

“Of course the big question now is, can Trump legally pardon himself? Because you see, no one knows for sure. But I actually want Trump to try it, just because it will be fun to see how he’ll do it. He’ll probably be in the mirror like, [as Trump] ‘I hereby pardon you. No, I pardon, stop pointing at me. I’m trying to pardon you. You’re pardoned. You’re so good-looking, but you’re pardoned.’” — TREVOR NOAH

“It’s not a great look for your presidency when your biggest accomplishment is ‘most family members pardoned.’” — JIMMY FALLON

“According to legal experts, Trump’s children may need pardons due to potential conflicts of interest arising between their business dealings and conversations with their father. Meanwhile, Jared Kushner needs a pardon for the time he killed a drifter just so he could feel something.” — JAMES CORDEN

“Usually presidents grant pardons after they’ve been vetted very carefully by the Justice Department. Trump is shooting them out of a T-shirt cannon right now.” — JIMMY KIMMEL

“Some families get each other sweaters for Christmas, the Trumps get pardons.” — JIMMY FALLON

“Pre-emptive pardons for his family — although to be fair, Don Jr. says he doesn’t need a pardon unless cocaine is illegal.” — JAMES CORDEN

“Yep, Trump said he wants to focus on taking care of his loved ones, those closest to him, and Eric.” — JIMMY FALLON

“Meanwhile, Mike Pence is also asking for a pardon, for the time he accidentally glanced at a picture of Kate Upton.” — JIMMY FALLON

The “Black Bear” star Aubrey Plaza will pop by Thursday’s “The Late Show.”

Image Miles Morales, the hero of a new Spider-Man game for PlayStation, “is different in a fundamental way” from his predecessor, the writer Evan Narcisse said.Credit…Sony Interactive EntertainmentContinue reading the main story

Comfort Viewing: 3 Reasons I Love ‘Billy on the Street’