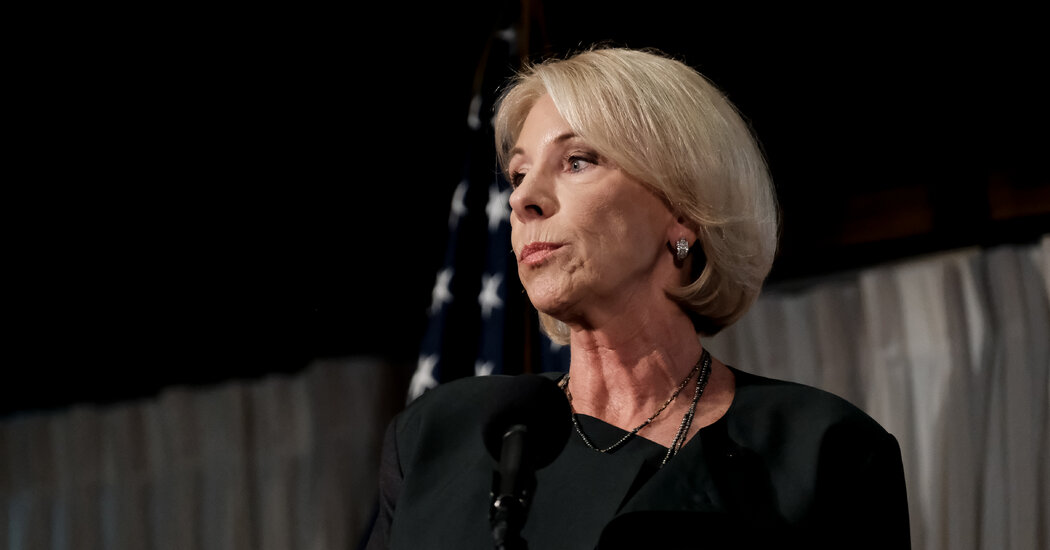 Mr. Schneider and Ms. Berkshire are co-authors of “A Wolf at the Schoolhouse Door.”

Credit…Michael A. McCoy for The New York Times

Measured solely by policy accomplishments, Betsy DeVos, one of Donald Trump’s longest-serving cabinet officials, was a flop in her four years as secretary of education.

Early on, her efforts to move a federal voucher program through a Republican-controlled Congress more concerned with taxes and deregulation repeatedly fell short. This year, she was forced to abandon a directive ordering states to redirect coronavirus funds to private schools after three federal judges ruled against her.

And significant pieces of Obama-era civil rights guidance that she rescinded — moves meant to protect transgender students, for instance, or address racially disproportionate school discipline — will be immediately restored by the incoming Biden administration.

Though Ms. DeVos has been mostly stymied, both by Trumpism’s policy indifference and progressive opposition, her legacy will still be far-reaching and long-lasting. This is not a result of what she made, but of what she broke: a bipartisan federal consensus around testing and charters that extended from the George H.W. Bush administration through the end of the Obama era.

For progressives, this shift hasn’t necessarily been bad news. In response to Ms. DeVos’s polarizing influence, moderate Democrats including President-elect Joe Biden recommitted to teachers unions and adopted more skeptical positions on school choice that were out of the question just a few years ago. Mr. Biden has pledged to exclude for-profit charter schools from federal funding, and he has proposed making larger investments in public education by using Title I statutes to double federal support for schools serving low-income students.

Yet Ms. DeVos has also elevated the education policy agenda of the far right, giving voice and legitimacy to a campaign to fundamentally dismantle public education. That campaign, pursued for the past few decades only in deep-red states, and often perceived as belonging to the libertarian fringe, has become the de facto agenda of the Republican Party.

So, while it is true that the Biden administration will swiftly reverse President Trump’s executive orders and administrative guidance from the Department of Education, Mr. Biden’s education secretary will still have to contend with extreme ideas that have suddenly entered the mainstream.

More than three decades ago, conventional Republicans and centrist Democrats signed on to an unwritten treaty. Conservatives agreed to mute their push for private school vouchers, their preference for religious schools and their desire to slash spending on public school systems. In return, Democrats effectively gave up the push for school integration and embraced policies that reined in teachers unions.

Together, led by federal policy elites, Republicans and Democrats espoused the logic of markets in the public sphere, expanding school choice through publicly funded charter schools. Competition, both sides agreed, would strengthen schools. And the introduction of charters, this contingent believed, would empower parents as consumers by even further untethering school enrollment from family residence.

The bipartisan consensus also elevated the role of student tests in evaluating schools. The first President Bush ushered in curricular standards in 1989 when he gathered the nation’s governors, including Bill Clinton of Arkansas, for a meeting in Charlottesville, Va. In a decade, George W. Bush’s No Child Left Behind legislation mandated accountability testing nationwide, tied to the standards that his father and Mr. Clinton had promoted.

The law was then modified under the Obama administration; still, the core logic of test-based accountability as a solution to closing the achievement gap was preserved. Arne Duncan, Mr. Obama’s education secretary, who was cool to teachers unions and spoke the language of markets, even threatened to withhold federal funds from California in 2013 if it didn’t test all its students.

Ms. DeVos, a critic of what she calls “the overreach of the federal government in education,” displayed no interest in this neoliberal compromise. Instead, she spent much of her time crusading for religious schools.

Curiously, the only time during her tenure that she prominently supported standardized testing was during the pandemic — a move seemingly intended to make public schools, which would obviously struggle to manage the task, look bad. And she surprised many last spring by backing a budget proposal with significant cuts in federal funding for public charters. To careful observers, this all made perfect sense, as Ms. DeVos’s chief aim has always been to move families out of the public system and to defund it.

Although Congress never took up her radical measures, such as a $5 billion annual tax credit for private school tuition, Ms. DeVos and her allies have made tremendous inroads at the state level. In Arizona and Florida funding for school choice programs has ballooned, with Florida taxpayers now spending more than $1 billion annually to send students to private schools.

And this past summer, the Supreme Court in Espinoza v. Montana declared that states could not bar religious schools from participating in state programs that provide scholarships to students attending private schools, clearing the way for further private expansion.

The blowback against the Republican Party’s rightward shift on education, however, is creating an opportunity for Democrats to move in new directions. In 2018, voters in purple states like Arizona, Michigan and Texas, and in red states like Kentucky, punished Republican candidates perceived as hostile to public education. And this fall, Arizona voters approved a measure to raise taxes on wealthy residents in order to increase funding for public schools and teachers — a move antithetical to the school privatization agenda that arguably helped turn the state blue.

To capitalize on voter dissatisfaction with education policies in the coming years, Democrats can no longer lean on maligning Ms. DeVos. As Republicans continue to work to defund and privatize school systems, both Democratic governors and the incoming Biden administration can draw a sharp policy distinction, boldly defending public education in a way that resonates with voters.

And while Mr. Biden’s expansive (and expensive) education plans will confront the harsh reality of partisan division in Congress, he is guaranteed a powerful megaphone — one that he’ll share, not just with the next secretary of education, but with a former high-school teacher and current community-college professor, Jill Biden.

Through her attention-attracting assault on the public education system, Betsy DeVos has actually given the next secretary of education an opportunity — to recommit to public education as a public good, and a cornerstone of our democracy.

Jack Schneider, an assistant professor of education at the University of Massachusetts, Lowell, and Jennifer Berkshire are the authors of “A Wolf at the Schoolhouse Door” and the co-hosts of the education podcast “Have You Heard.”