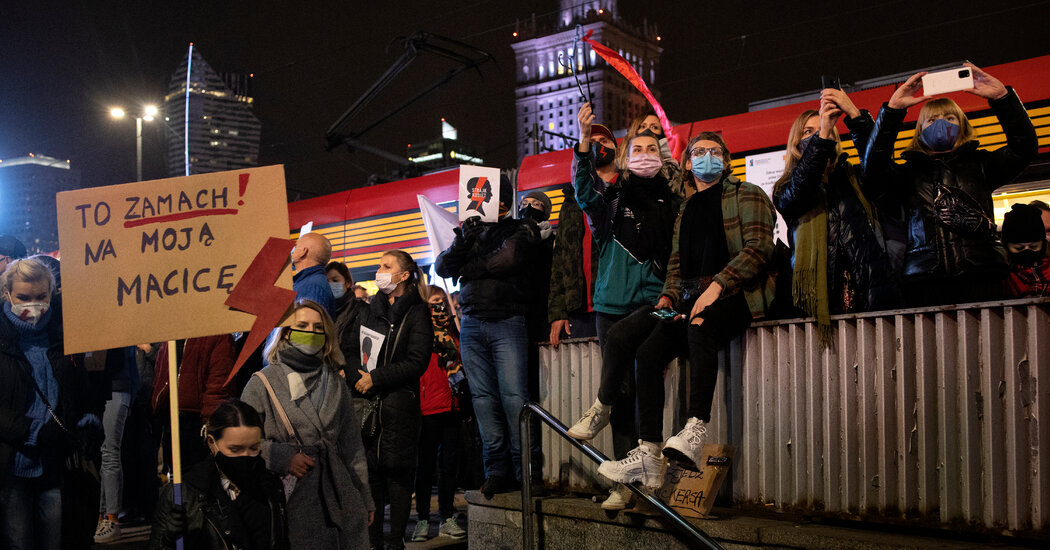 Outraged by a court decision to ban nearly all abortions, tens of thousands of women took to the streets of Poland’s capital on Friday, culminating a week of big protests across the country.

Thousands of protesters marched through Warsaw on Friday in a demonstration against Poland’s new abortion restrictions.Credit…Maciek Nabrdalik for The New York Times

WARSAW — Ignoring the threat of prosecution and the dangers posed by a surge of coronavirus cases, tens of thousands of women outraged by a court decision to ban nearly all abortions in Poland converged in Warsaw on Friday, intensifying what have been the largest demonstrations in the country since the fall of communism in 1989.

With a musical medley that included Darth Vader’s theme from Star Wars, in a poke at the government, and techno music blaring over loudspeakers, crowds of women flooded the streets of the capital. Many of the women had the red lightning bolt that has become the iconic image of the movement emblazoned on their clothes, as the police and military security officers flanked them as they marched.

They were joined by thousands of men and a wide array of groups who believe that the hard-won freedoms of the post-communist era are slipping away under the rule of the increasingly autocratic Law and Justice Party.

Friday’s protests were the culmination of a week of large-scale demonstrations, with the police estimating that 430,000 people attended more than 400 demonstrations around the country on Wednesday. 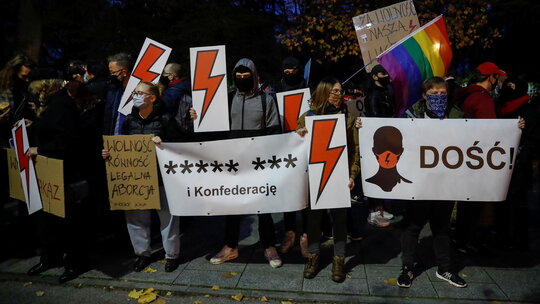 Outraged by a court decision to ban nearly all abortions, thousands of people took to the streets on Friday in the largest demonstration yet.CreditCredit…Kacper Pempel/Reuters

While the protests have been overwhelmingly peaceful, Friday’s march brought a major police presence to the streets of Warsaw amid concerns that violence could break out with right-wing activists.

Bartosz Bekier, head of the extreme right group Falanga, in an interview with a Polish news portal Onet, estimated that several thousand nationalists would be going to the protests, noting they were “trained in combat tactics.”

The police said Friday that some “soccer hooligans” had attacked protesters by throwing flares at them, prompting officers to intervene with force. About a dozen people were arrested, they said. There were scores of other reports from local news media of clashes between nationalists and demonstrators.

Protests of this scale have not been seen in the country since the Solidarity movement in the 1980s that led to the collapse of the Communist government, according to analysts, a measure of the discontent felt by many Poles over the high court decision on Oct. 22 to virtually ban abortion.

For many of those protesting this week, the ban on abortion fits what they see as a pattern of policies chipping away at basic human rights.

Image A red lightning bolt has become an iconic image of the protest movement.Credit…Maciek Nabrdalik for The New York Times

“I’m here because my sense of helplessness has reached its peak,” said Anna Rabczuk, a graphic designer who attended with her boyfriend and held a banner saying “People before embryos.” She added: “I feel unimportant, I feel less and less like a Pole and I feel really sad about that.”

She said the ruling on abortion was part of a broader erosion of the individual freedoms that she believes come with being a part of the European Union.

The court’s decision halted pregnancy terminations for severe fetal abnormalities, effectively the only type of abortion currently performed in Poland. Abortions of pregnancies resulting from rape and those threatening the life of women are still formally legal.

In the deeply religious country — where 33 million of the 38 million citizens are registered as Roman Catholic — the anger directed at the clergy has been one of the most striking aspects of the protests.

“I feel a lot of hatred toward the church,” said Zuza Rawa, who was heading for a protest in the city’s center. Baptized a Catholic, she said she no longer feels part of an institution that was in dire need of reform.

“I am terrified and this is the main reason why I’m here,” Ms. Rawa said. “I don’t want to see my country in such condition.”

The governing party has used the attacks on the church to rally its own supporters. And some nationalist extremists have seized on the moment to form a self-proclaimed “national guard.”

Young men clad in black and armed with pepper spray — many with shaved heads — have become a nightly presence outside churches and cathedrals. They have confronted protesters, and a number of brawls have been reported near churches in Warsaw and elsewhere. Two female reporters from the nation’s largest daily newspaper, Gazeta Wyborcza, reported they had been attacked.

Security forces stood between far-right supporters, left, and protesters outside the Holy Cross church in Warsaw.Credit…Maciek Nabrdalik for The New York Times

The mass gatherings have been held despite a surge in coronavirus cases in Poland, with more than 20,000 new infections now reported daily and hospitals struggling to deal with the influx of patients.

Prime Minister Mateusz Morawiecki, speaking to the country Friday morning from a hastily constructed hospital on the grounds of the National Stadium on the banks of the Vistula river in Warsaw, sought to redirect attention to the pandemic and urged people to stay home.

“Let your anger focus on me, on politicians, let it touch me but not those whom it can touch in two weeks,” he said. “Protesting ladies and gentlemen, you will get in touch with elderly people on the bus, at home or during a meeting. This may result in dramatic consequences.”

But many viewed his pleas with skepticism, with critics suggesting the abortion ruling was timed to distract the public from the government’s failure to prepare for the wave of infection now washing over the country.

The fact that the virus did little to deter the crowds underlined the depth of the divisions that have been tearing the country apart since the Law and Justice party gained control of the government in 2015 promoting a vision of a nation that needed to “rise from its knees.”

At that time, migrants were the focus of the party’s most vitriolic rhetoric. But as that issue has faded, the party has cast gay people as an existential threat to the nation, prompting dozens of localities to pass legislation declaring their regions free from “L.G.B.T. ideology.”

The decision on abortion by Poland’s top court cannot be appealed, but since the opinion has yet to be published it is not yet technically legally binding.

President Andrzej Duda, who was diagnosed with coronavirus last week and is still recovering, suggested Friday that he was open to some form of compromise.

Friday’s protests were the culmination of a week of large-scale demonstrations across Poland.Credit…Maciek Nabrdalik for The New York Times

After consulting with women and experts, he submitted “a proposal of changes” to Parliament on Friday.

But the effective leader of the government, Deputy Prime Minister Jaroslaw Kaczynski, who is the head of the Law and Justice party, has struck an increasingly defiant and often confrontational pose.

Mr. Kaczynski said this week that the aim of the protests was to “destroy Poland and end the history of the Polish nation,” in what critics described as a call to action by his right-wing supporters.

Following Mr. Kaczynski’s denunciation of politicians who support the protests as “criminals,” the Justice Ministry sent a notice to prosecutors around the country ordering them to target the organizers of the “illegal gatherings” for endangering public health during the pandemic.

At the same time, the education and science minister, Przemysław Czarnek, threatened to cut funding for universities deemed to be facilitating or encouraging protesters.

After some universities canceled classes to allow students to attend rallies earlier in the week, the minister said their behavior was “scandalous.”

“Young people are in a period of rebellion. We went through this too,” he told the state television broadcaster, TVP. “The difference is that we were brought up in the spirit of authority. Teachers were authorities. We must return to that.”

2,596 Trades in One Term: Inside Senator Perdue’s Stock Portfolio

As wildfires flare up across West, research highlights risk of ecological change