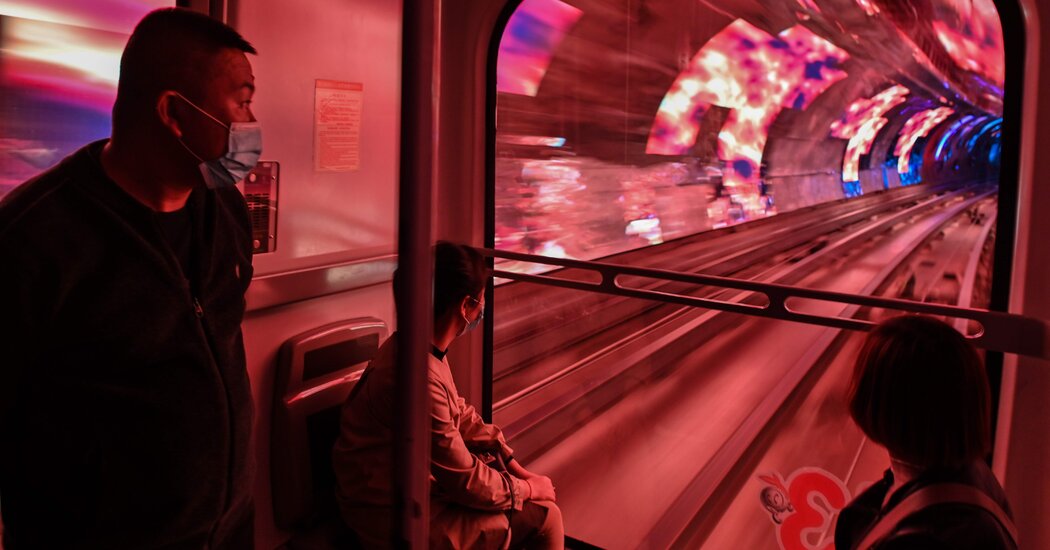 China’s approach to keep Covid-19 at bay has helped restore confidence and allowed businesses to reopen. But it is a strategy steeped in authoritarianism.

People traveling through a sightseeing tunnel which crosses below the Huangpu River in Shanghai. Residents are once again flocking to malls, bars, concert halls and hair salons, and schools, subways and offices are crowded.Credit…Hector Retamal/Agence France-Presse — Getty Images

The United States is hitting records in daily coronavirus cases. But China, the country first afflicted with the scourge, is having a different experience.

Unlike the Trump administration, which has said it is prioritizing opening the economy while essentially giving up on controlling the pandemic, China moved aggressively to stop the virus. The result: China’s economy is growing and life there is returning to a semblance of normal, while the United States is struggling with a third wave of infections and the prospect of new restrictions.

Economic growth in China has surged, hitting 4.9 percent in the latest quarter, and consumer spending has slowly started to recover. Residents are once again flocking into malls, bars, concert halls and hair salons, while schools, subways and offices are crowded.

China has effectively sealed off its borders from the outside world and doubled down on efforts to eradicate the virus. When a crop of cases emerge, the government swiftly shuts down vast areas and quickly tests millions of people, to help keep local transmissions near zero.

China’s authoritarian government has the ability to act in a way that democracies that must be accountable to the public cannot. But it has demonstrated that the way to open the economy is to first safeguard public health.

While Mark Meadows, the White House chief of staff, has said the United States is “not going to control the pandemic” but will focus on getting vaccines and therapeutic treatments to combat the disease, China’s approach has helped to restore confidence and allow businesses to reopen.

During a recent national holiday in China, when hundreds of millions of people went on trips nationwide, tourists crammed shoulder to shoulder to celebrate along the banks of the Huangpu River in Shanghai, some without masks. At Yellow Mountain, in the eastern province of Anhui, thousands of people squeezed into narrow hiking trails, bumping into each other as they passed by granite peaks and pine trees.

“People aren’t panicked anymore,” said Eric Xie, who works at an internet company in the eastern Chinese city of Hangzhou. “You can eat at restaurants, go to movies and play sports. Life has basically returned to normal.”

As with much in the Covid era, the normalcy comes with an asterisk. Mr. Xie said he rarely goes on work trips anymore, instead speaking with clients by video. He said people had largely grown accustomed to wearing masks on subways and buses, even though Hangzhou has not had a coronavirus case in months.

“It has become a habit,” he said. “It’s just part of life. People accept it.”

China’s success would have seemed improbable when the virus emerged in the central city of Wuhan late last year.

The Chinese government was denounced for trying to initially cover up the virus and to silence those who tried to warn about the outbreak. The decision to lock down Wuhan, a city of 11 million, for 76 days was widely criticized as inhumane and damaging to the livelihoods of ordinary families.

For months, President Trump has been one of Beijing’s fiercest opponents. He has railed against the “China virus” on Twitter and has made attacks on the Chinese Communist Party a centerpiece of his campaign.

But China now represents the extreme, Communist version of a highly managed, scientifically backed approach that has worked in South Korea, Japan, New Zealand, Taiwan and other democracies. To varying degrees, they are emphasizing the collective good over personal freedoms, a formula that has allowed them to keep cases relatively low.

In these places, people take heed when officials mandate masks and impose social distancing restrictions, even if sometimes begrudgingly. They put up with mandatory quarantines and invasive government tracking efforts. They support closing the borders and limiting entry, in most cases, to residents only.

By contrast, the pandemic has become highly politicized in the United States, where there have been more than nine million cases and 228,000 deaths. Wearing masks has become a divisive issue, and many Americans have resisted government limits on their movements.

As with much in China, the government leaves little room for dissent or debate over its authoritarian approach to combating the virus, and the population is forced to acquiesce to the party’s demands. Yet many people in China say they are relieved that the pandemic seems to be under control, especially as the United States and countries in Europe confront a crush of new cases.

“People don’t feel the restrictions are too severe,” said Vivian Gao, 26, who works at a cultural tourism company in Shanghai. “The results are good.”

When tourism came to a halt amid the outbreak, Ms. Gao’s company cut her salary for several months by two-thirds, to about $300 a month, straining her budget. Now she says the firm’s employees have all returned to the office and customers are once again lining up to shop and dine.

“Life is back on track,” said Ms. Gao, whose salary has been restored.

Ms. Gao said she believed China’s top-down model was better equipped to handle the pandemic than the American political system, which she said placed too much emphasis on individual freedom.

Tourists lined up to enter the Forbidden City in Beijing on Sunday.Credit…Andy Wong/Associated Press

“In China, a word from a superior can be heard immediately and implemented quickly,” Ms. Gao said. “It’s the difference between individualism and collectivism.”

The distinction between the two countries has fueled a propaganda frenzy, with officials highlighting the surge in cases in the United States to tout the strength of China’s authoritarian system and deflect attention from domestic problems.

The Chinese foreign ministry has said the pandemic has “torn the emperor’s new clothes” off American democracy. A recent commentary in Global Times, a brash tabloid controlled by the party, called the situation in the United States a “huge human rights tragedy,” echoing language that American politicians often use against China.

The failure of many western countries to contain the pandemic has helped Mr. Xi bolster the party, which came under attack for its early missteps in handling the crisis.

“The message is, ‘Look at the way the United States and Europe are dealing with a simple matter of life and death — and look at how your government under the Communist Party and Xi Jinping have dealt with the exact same issue,’” said Steve Tsang, director of the China Institute at the School of Oriental and African Studies in London.

Mr. Tsang said the party’s success in handling the pandemic would strengthen Mr. Xi’s grip on power, especially if the Chinese economy continues to outperform other countries. “It will simply reinvigorate him in his efforts to tighten up control of society,” he said.

The economy remains in a precarious position, and its strength depends in large part on whether the party can maintain a sense of confidence among the public. With a vaccine still many months away, business owners worry the virus could resurface and once again bring life in China to a standstill.

Jane Shao, president of Lumière Pavilions, a Chinese movie theater chain, said sales had largely recovered since last year because customers believe they can be safe in public. The widespread use of apps in China that verify people’s health has helped reduce fears about the virus, she said.

Even so, Ms. Shao said there was a “long way to go” and that she was worried about the possibility of scattered outbreaks.

“I can’t expect we will live in a panic-free society before vaccines are introduced,” she said.

The country is also navigating a fine line between encouraging people to be vigilant about the virus and fueling paranoia.

When a single asymptomatic case of the coronavirus was detected last week in Kashgar, in the western region of Xinjiang, the authorities rushed to lock down the city. Officials demanded that more than four million people undergo tests for the virus, eventually finding nearly 200 cases, largely asymptomatic.

The mass testing effort followed similar drives in the cities of Wuhan, Beijing, Qingdao, and Urumqi, after clusters of cases emerged.

China’s authoritarian hammer has been a staple of its strategy from the outset, helping it move quickly and bluntly to vanquish resurgences of the virus. But the government’s tactics also provoked anger among residents, who say the authorities have at times reacted too harshly.

Yibulayinaji, a 38-year-old owner of a pilaf stand in Kashgar, said shops had been ordered to close and residents were staying indoors.

“We don’t know when they’ll allow us to reopen, but right now, we can’t do any business,” he said in a telephone interview. “We can’t go out. We can’t go anywhere.”