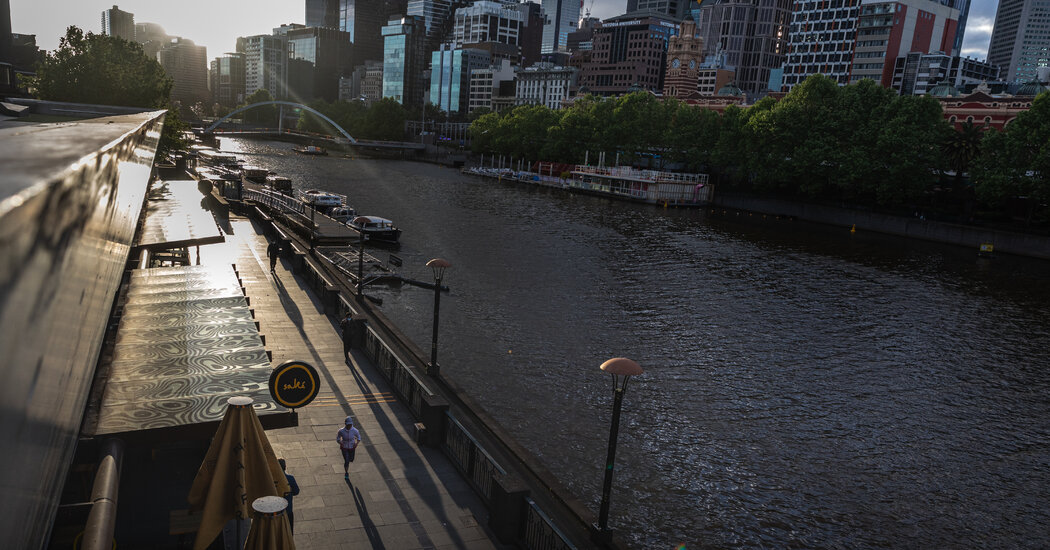 After chafing against their isolation for so long, Australians these days are finding island life a privilege when pestilence lies beyond.

A lone runner along the banks of the Yarra River in Melbourne, Australia, this month.Credit…Asanka Brendon Ratnayake for The New York Times

SYDNEY, Australia — They used to call it “the tyranny of distance.” Australia’s remoteness was something to escape, and for generations, the country that hates being referred to as “down under” has been rushing toward the world. Trade and immigration made Australians richer than the Swiss, creating a culture where life can be complete only with overseas trips and imported purchases.

Until the pandemic. The virus has turned this outgoing nation into a hermit. Australia’s borders are closed, internationally and between several states. Its economy is smaller, and its population growth has fallen to its lowest rate in more than 100 years.

Rather than chafing against isolation, though, Australians these days are more willing to smile in the mirror. Island living looks like a privilege when the world is pestilent. Those gnawing questions about travel, recession and the loss of global experience are being shoved down, below a more immediate appreciation for home and a search for silver linings.

In dozens of interviews, Australians have said they’re quite happy with their country’s response to the pandemic. Even with travel rules so strict they seem like something out of China or North Korea. Even with a 111-day lockdown in Australia’s second-largest city of Melbourne, which just finally ended. Even when the people kept away are grandparents longing to see new grandchildren.

That’s the case for Jane Harper, a best-selling novelist in Melbourne, who has traded getting to know every building in her neighborhood for seeing her parents in Britain.

“I had my second child in November, and they would have come out at least once and possibly twice by now,” she said. “Not knowing when that will lift — I guess it gives us more appreciation for how lucky we are to be able to visit in normal times, and it makes you realize how far away Australia really is.”

Not that she would have it any other way. After so much isolation, she added, “there is a real sense among Australians that we can dig deep and help each other deal with whatever is facing us.”

Many other countries have also cut themselves off from their neighbors, and other island nations (Singapore, Japan, New Zealand) have also kept the virus in check. But in Australia, the ever-smaller circle is more intertwined with the pursuit of safety.

Coronavirus deaths remain under 1,000. Schools and restaurants are open, sports are being played, and friends are gathering for dinner parties. But people stick to where they can drive and what they know, and a lot of work still occurs from home.

If many of its citizens are still stranded abroad by border restrictions, Australians argue, so be it; if states like Western Australia seem determined to keep out everyone from Sydney and Melbourne for as long as possible, well, at least the virus has been brought into submission.

Forced into a bell jar existence, many Australians are focusing on what they love about their country. The collectivist spirit. The fresh food. The beaches and small towns that equal or supersede the beauty of anywhere else in the world.

“It’s been kind of fun to see domestic travel go crazy again,” said Fred Siggins, 39, the brand manager for Sullivans Cove, a whiskey distillery in Tasmania. “That’s how it was in the ’90s before everyone started hiking off to Bali or whatever.”

Australia’s mood also seems to be benefiting from another reversal — many of those who had taken their ambitions to New York, London or Los Angeles have returned.

Edwina Throsby, the head of Talks and Ideas for the Sydney Opera House, said she knew several academics and creative types who had come home and now intended to stay. Like many others, she wondered if an Australian cultural renaissance might follow.

At the very least, self-reflection seems to be blooming.

In one small sign among many, Australia’s most prestigious portrait prize in contemporary art was awarded this year, for the first time, to an Aboriginal artist, Vincent Namatjira.

On a recent morning at the Art Gallery of New South Wales, his large-scale self-portrait with a well-known Indigenous Australian football player drew a cluster of avid fans, young and old.

Each exhibit hall had a plaque outside showing the maximum number of people allowed in because of coronavirus restrictions. Masks were not required (Sydney is mostly virus free) and visitors respected the rules. They booked a time in advance and stayed socially distanced.

Michael Brand, the museum’s director, who previously ran the J. Paul Getty Museum in Los Angeles, said it pointed to how the pandemic was making people more thoughtful users of time and space.

Maybe fewer options and more planning will “liberate our minds,” he said.

Technology, he added, will save Australia from fully retreating into itself. He said he had been frequenting museum collections online, while also using the time gained from a lack of travel to explore new realms — such as Nordic crime dramas.

Ms. Harper, who published a new novel, “The Survivors,” last month, said she had also been encouraged by larger-than-usual audiences for her readings online.

“There are so many people there who would never come to an in-person book event,” she said.

Some surprising businesses are adapting, too. Frank Theodore, a fishmonger at the Sydney Fish Market, upgraded his Get Fish website after a bleak April and said total sales were up this month compared with last October.

And yet the virtual has its limits. Ms. Harper’s parents can’t hug their grandchildren over Zoom. Mr. Brand has started posting photos to Instagram of past trips with the phrase “museums I’m missing during the pandemic.”

Social norms are also under strain. Mr. Siggins, a chatty former bartender, recently ordered a cocktail delivered to his home in Melbourne from a local bar and met an acquaintance at the door. He said it felt like an awkward date.

“It’s such a strange interaction,” he said, “because you can’t just tell them to come in and have a beer, and you are just really out of practice, reacting to conversation, even facial expressions.”

Could something similar happen for Australia’s relationship with the world?

Former Prime Minister Malcolm Turnbull, sitting in his Sydney office above quiet streets missing both tourists and workers, scoffed at the idea of Australia giving up on globalism.

“I think there is broad agreement on both sides of the political fence,” he said. “Free trade and open markets are keys to our success.”

Still, there are signs of a narrowing perspective. Incidents of racism have been increasing, with anyone who looks Chinese bearing the brunt of the abuse. Australian universities have had to slash their budgets and research ambitions because of a lack of foreign students.

“We’re going to be more insular,” said Geoff Raby, an economist and a former ambassador to China. “We’re sleepwalking right into that.”

Hermetically sealed safety seems likely to exact a toll for as long as it lingers. Silver linings hide on dark clouds. Australians are only just starting to wonder about long-term costs and what to do with their isolation.

“We’ve all worked so hard to keep our cases down, and that’s such a fragile, precious thing that I can completely understand the strong urge to protect it,” Ms. Harper said. “My desire to see my parents, does that outweigh my desire to never go into lockdown again?”

“It’s not my decision to make,” she said. “But nationally that’s the question we are all asking ourselves.”

Manly Beach in Sydney this month.Credit…Matthew Abbott for The New York TimesContinue reading the main story