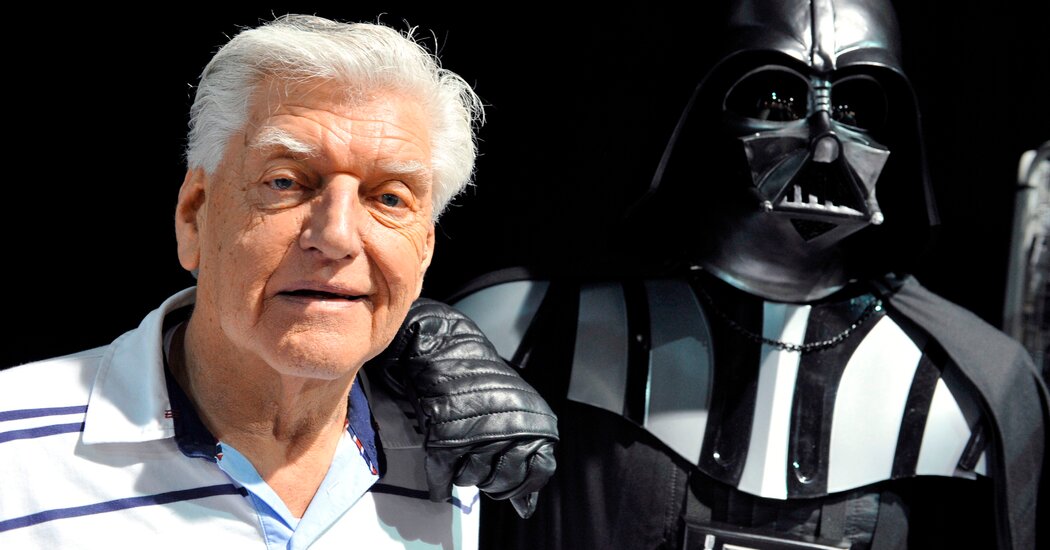 Mr. Prowse went from being a weight lifting champion in Britain to helping portray one of the most memorable villains in movie history. But his voice did not make the edit.

Dave Prowse, the British actor who gave the imposing physical presence — but not the voice — to Darth Vader in the original “Star Wars” trilogy, died on Saturday in a hospital in London. He was 85.

Mr. Prowse’s death was confirmed by Thomas Bowington, his agent. Mr. Prowse’s family did not release a cause of death, but he retired in 2016 because of ill health, Mr. Bowington said.

Standing 6-foot-6 and with a physique honed by years of weight lifting (he was once the British heavyweight champion), Mr. Prowse had the perfect presence for the role of Darth Vader, whom he played in 1977’s “Star Wars,” in “The Empire Strikes Back” in 1980 and in “Return of the Jedi” in 1983.

Image Mr. Prowse, left, in 1978. He was the British heavyweight champion in weight lifting in the 1960s.Credit…Colin Davey/Evening Standard, via Getty Images

He was scouted for the role by George Lucas, the franchise’s creator, who had seen Mr. Prowse play a bodyguard in Stanley Kubrick’s “A Clockwork Orange.”

Mr. Lucas actually offered Mr. Prowse a choice of roles for the original “Star Wars”: Chewbacca, the hairy, gentle giant and a hero in the franchise; or Darth Vader, the arch-villain. Mr. Prowse told the BBC in a 2013 interview that the choice had been simple. “I said, ‘Well, don’t say any more, George, I’ll have the villain’s part,’” Mr. Prowse recalled. “You always remember the bad guy.”

There was another reason he turned down Chewbacca, he added: “I thought, ‘Oh, God no, three months in a gorilla skin, no thank you very much.’”

Mr. Prowse’s voice had the distinctive agricultural tones of someone born in Bristol, in southwest England, and many believe that is why he did not get to voice Darth Vader. His lines were instead overdubbed by James Earl Jones after filming had finished.

In the BBC interview, Mr. Prowse said that it was not actually his accent that had led to the change. Wearing Darth Vader’s mask had caused his lines to come out muffled during filming, he said, and Mr. Lucas did not have time to fly him out to America to overdub the lines afterward.

Mr. Prowse only learned that his voice was missing from the film at its premiere. “I’m watching the film and all of a sudden this strange voice comes over,” he told the BBC in the 2013 interview. “I thought, ‘Oh, goodness me, that’s not me.’” But he said that Mr. Jones had been “a great choice” for the part and the pair became friends.

But some said the change was inevitable because of his accent. “They always knew they were not going to use that voice,” Carrie Fisher, who played Princess Leia in the films, said in a 2016 BBC interview. “We called him Darth Farmer.”

Mr. Prowse’s face and voice could have finally made an appearance in the franchise in “The Return of the Jedi” when Luke Skywalker (played by Mark Hamill) removes Darth Vader’s mask so that the pair can look at each other. But Mr. Lucas instead decided to use the actor Sebastian Shaw to play the character in that moment.

In some fight scenes, Darth Vader was also played by Bob Anderson, a fencer and stunt double.

Regardless of the changes, Mr. Prowse was always a favorite of “Star Wars” fans and spent much of his life afterward attending conventions and dealing with fan mail — some of it of a salacious nature from women who found his suit sexy, he told Jackie Collins in a 1980 interview.

David Charles Prowse was born in Bristol, England, on July 1, 1935. His first passion was not acting but bodybuilding and he won the British heavyweight championship in weight lifting in the 1960s. Once he moved into acting, his first roles were mainly as monsters in horror movies.

In Britain, he became more widely known when he got the part of the Green Cross Code Man, a superhero who promoted road safety. He appeared as the character in a government television campaign and also toured schools to encourage children to stop, look and listen before crossing the street.

The British government almost fired him from that role after “Star Wars” came out, Mr. Prowse told Ms. Collins in the 1980 interview, because they felt Darth Vader’s image could clash with a road safety campaign.

That campaign ran until 1990, and Mr. Prowse wrote in a 2014 piece for The Guardian that it was “the best job I’ve ever had, including my Star Wars role, and by far my proudest achievement.” But even in Britain, Mr. Prowse will most likely be remembered more for being the man behind the suit in “Star Wars” than anything else.

He is survived by his wife, Norma Scammell, and three children, Mr. Bowington said.