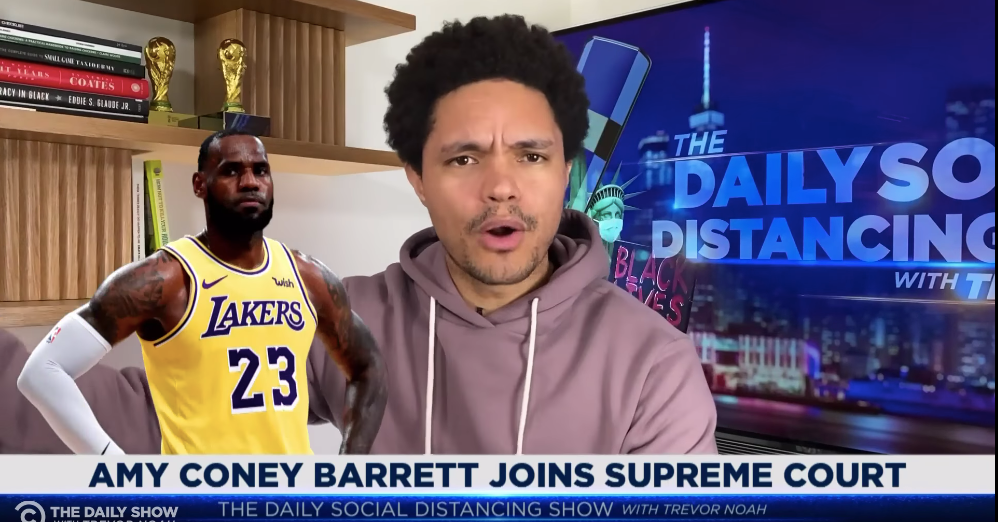 “Technically, yes, they’re swapping one Black man for another, but good luck on making the playoffs next season,” Noah joked on Tuesday’s “Daily Show.”

“Technically, yes, they’re swapping one Black man for another, but good luck on making the playoffs next season,” Noah joked on Tuesday’s “Daily Show.”Credit…Comedy Central

“And I don’t know about you, but I was shocked to see the Senate move this quick. I mean, normally they take months to do anything but here they moved so fast it was disorienting. It was like when you call customer service and immediately speak to a human being.” — TREVOR NOAH

“I mean, they just hustled Amy Coney Barrett straight from the confirmation to a midnight ceremony. [Expletive] looked like the basic cable version of ‘Eyes Wide Shut.’” — TREVOR NOAH

“And just think, someday you’ll tell your children about this, whether you wanted children or not.” — SETH MEYERS

“During a swearing-in ceremony for Judge Amy Coney Barrett last night at the White House, President Trump said, quote, ‘This is a momentous day for America, for the United States Constitution, and for the fair and impartial rule of law.’ Momentous in that it’s the last day for all of those things.” — SETH MEYERS

“Huge day for the inevitable: We can project water is wet, death comes for us all, and last night, Judge Amy Coney Barrett was confirmed 52 to 48, which means Donald Trump now has as many Supreme Court appointments as he’s had wives. And unlike ‘Trump wife,’ these positions last a lifetime.” — STEPHEN COLBERT

“And you gotta admit, Trump’s comment about Barrett being the perfect replacement for RBG is grade A trolling. He knows what he’s doing because yes, RBG and Barrett are both women, but Barrett is going to dismantle all of RBG’s good work. So this would be like if the Lakers replaced LeBron with Ben Carson. Technically, yes, they’re swapping one Black man for another, but good luck on making the playoffs next season.” — TREVOR NOAH

“Now, not everything about Barrett’s confirmation had to happen the way it happened, because after the Senate vote, Barrett went to the White House for a hastily thrown-together swearing-in ceremony and baldly political photo op with President Trump, which is not normal. A member of the Supreme Court hasn’t behaved this inappropriately since Justice Kennedy appeared on the bench wearing a T-shirt that read, ‘It’s not a gavel, it’s a chick hammer.’” — STEPHEN COLBERT

“And on top of everything else, last night Trump hosted another event for Judge Amy Coney Barrett at the White House. The first one everybody got sick. What is he thinking? This is like if in the ‘Game of Thrones,’ the Starks decided to have a second Red Wedding.” — JIMMY KIMMEL

“Judge Barrett was sworn in at the White House last night, which means the guy who owned the Miss Teen USA pageant has now appointed a full one-third of the Supreme Court.” — JAMES CORDEN

“And old habits die hard. At the very end of the swearing-in ceremony, Trump instinctively placed a crown and sash on her.” — JAMES CORDEN

“There’s just one week until Election Day and whatever happens, it’ll be nice when my email inbox doesn’t look like I just broke up with it.” — SETH MEYERS

“I feel like I’m waiting for the results of a biopsy right now, that’s the mood I’m in.” — JIMMY KIMMEL

“I can’t believe it’s that soon. I mean, it feels like the last four years have just really flown by. Seriously, every morning since 2016, Democrats have been carving the days into the walls like they’re doing time at Rikers Island.” — JIMMY FALLON

“Most of the early voting has gone to the Democrats. And on the other side, Trump has spent months warning his supporters against voting by mail, so the G.O.P. is essentially betting all of its chips on a strong Election Day. He’s taking all of his chips and putting it all on Black people not voting — but they have already in massive numbers, and the disparity in early voting means that Trump needs a huge turnout on Election Day in the middle of a surging pandemic. It’s the last act of Trump’s death cult.” — STEPHEN COLBERT

“That’s right, over 65 million have already voted, and thanks to the Supreme Court, almost three million of those will be counted.” — JIMMY FALLON

“Late Night” writers Amber Ruffin and Jenny Hagel returned for another round of their regular segment “Jokes Seth Can’t Tell.”