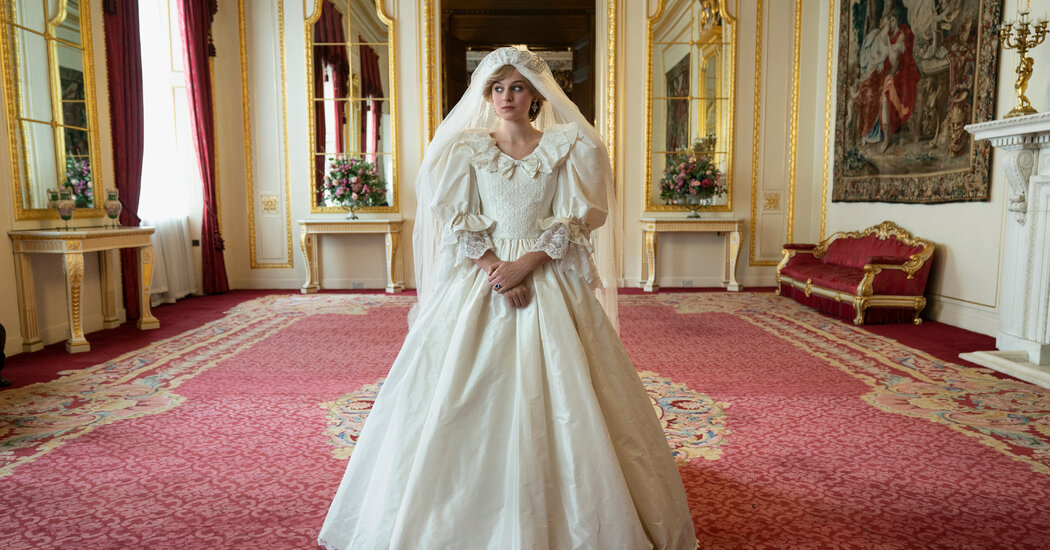 Our pop culture editor in London talks about the popularity of “The Crown” on both sides of the Atlantic, and giving the people what they want.

Emma Corrin as Princess Diana in Season 4 of “The Crown.” The Times has published more than a dozen articles about the show recently.Credit…Des Willie/Netflix

Once again, viewers on both sides of the Atlantic are riveted by royals.

Since the fourth season of “The Crown,” the opulent Netflix series about the life and times of Queen Elizabeth II, dropped on Nov. 15, more than three million readers have devoured more than a dozen pieces in The New York Times about the show, including a fact check of the series; a conversation with the season’s breakout star, Josh O’Connor; and a meditation on why we care so much about Princess Diana’s dresses.

Eleanor Stanford, a London-based senior editor on the Culture desk who oversees The Times’s “Crown” coverage, weighed in on why the royals continue to captivate viewers, Gillian Anderson’s polarizing take on Margaret Thatcher and the role of the lockdown in the show’s success.

Millions of people have read the dozen stories you’ve published about the show over the past few weeks. Did you anticipate that much interest?

“The Crown” has become a television juggernaut in the style of “Game of Thrones,” albeit on a smaller scale. And we’re all desperate for counterprogramming about anything not related to the election or the pandemic. This is also a really juicy season and, since it covers the 1980s, most of the people involved are still alive. It’s this escapist show that’s also true — you can Google things afterward to see what actually happened.

Americans are obsessed with the royals — and this series. Is that also true in Britain?

If you asked the average American and the average Brit about the series, you’d get a more favorable reaction from the American. I think it’s a lot easier for Americans to love the monarchy because they don’t have the edge of having to pay for them through taxes.

Why do the royals have such a hold on us?

It’s this weird old school institution that still exists — the royal family has all the drama of reality TV stars, but played out much more behind closed doors. You can live vicariously through them a bit.

Image The fourth season, described by the senior editor Eleanor Stanford as “really juicy,” takes viewers into the 1980s, with (from left) Emma Corrin as Diana and Josh O’Connor as Charles, Olivia Colman as Queen Elizabeth II, and Gillian Anderson as Margaret Thatcher.Credit…Alex Bailey/Netflix; Des Willie/Netflix

The show isn’t a documentary, of course, but is it generally a good guide to British history?

It does give viewers quite a good grounding in elements of 20th century British history, like the I.R.A. and the Falklands War. I’ve talked to a lot of people in England who’ve watched it and then been like, “Oh, shoot, I should’ve known that.”

What do you think of Gillian Anderson’s portrayal of Margaret Thatcher, the first female prime minister of Britain?

If you’re not super familiar with Margaret Thatcher, it reads really strangely and is a bit of a caricature. But if you watch Thatcher’s speeches and look at the way she talked in public, it’s remarkably accurate. She was a very strange — to my mind, unpleasant — woman, and Gillian Anderson does a good job of capturing that.

How far ahead did you start planning your coverage?

The Netflix team sent out screeners at the end of September, which was helpful because we had some lead time to work on our story about the historical accuracy of the series. It was very much a cross-desk effort — it takes a village to pull off coverage like this.

What are some of the more offbeat stories you tackled?

We talked to Gillian Anderson for a piece that included all the people who have played Thatcher in England over the decades. And people kept mentioning the music in the season to me, so we have a piece on the ’80s pop music that went up. And we have a story about how African women of Diana’s generation and older have this strong emotional bond with her, and what it’s been like for them to watch her on this season.

What will you be watching for in the fifth season, which is slated for a 2022 release?

They haven’t disclosed the exact period the season will cover, but I imagine it will probably be the next 10 years, so the 1990s. We’ll get to see William and Harry as boys, as well as Diana’s death, so it feels more interesting in terms of connections with the present-day royal family.

How are things going in the television world in England right now?

We’re in a second national lockdown that’s supposed to end Dec. 2 — we’ll see whether that happens. A lot of shows were going back over the summer with social distancing and bubbling. “The Great British Baking Show” managed to film a season. But it’s been a monthlong lockdown right now, and things are kind of on hold again.

Would people still be going crazy for streaming series like “The Crown” if we weren’t all stuck at home?

“The Crown”? Yes. It’s a well-produced, beautiful, engaging show. “Tiger King” and “Emily in Paris?” I don’t think so.