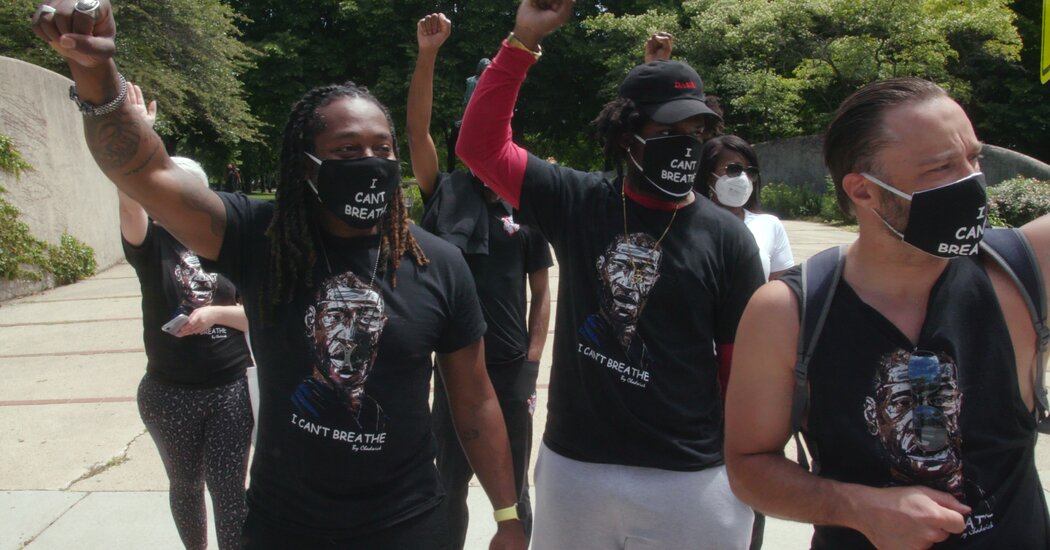 The director Steve James talked about his new docu-series, which uses the 2019 mayoral race and its tumultuous aftermath as the thread to stitch a larger American story.

Part 5 of “City So Real,” shot after the first four debuted at Sundance, followed up on the 2019 Chicago mayoral election to look at how the city has managed amid the pandemic and Black Lives Matter protests.Credit…Chicago Story Film, LLC/National Geographic

CHICAGO — When Rahm Emanuel opted against running for a third term as Chicago mayor, the 2019 election became the political equivalent to “It’s a Mad, Mad, Mad, Mad World,” with a colorful cast of characters barreling through a calamitous race for the prize. For the first round of voting, Chicagoans faced a ballot of 14 candidates, whittled down after many others had withdrawn or had their petitions rejected. The eventual winner, Lori Lightfoot, had never held elected office. A classic plot twist.

“It was an election in which you could almost make the case that every demographic of Chicago had a candidate in the hunt,” said Steve James, the director of “City So Real,” a five-part docu-series that will air in full on the National Geographic Channel Thursday night and arrive on Hulu the next day. “Now, one that could win? Different story.”

For years, James had wanted to make a documentary about Chicago, a city of neighborhoods that have distinct ethnic and racial identities, sharp class divisions and competing political constituencies. The election gave James the opening he needed. Whoever won would have to make sense of this mosaic of a city. So would he.

As perhaps the city’s most celebrated documentary filmmaker, James had already laid out pieces in this mosaic. His landmark 1994 documentary “Hoop Dreams” followed two African-American basketball prospects as they trekked from inner-city Chicago to the suburban private school attended by the N.B.A. Hall of Famer Isiah Thomas. More recently, James’s “The Interrupters” (2011) detailed a bold strategy to curb the city’s gun violence, and his 10-part Starz series, “America to Me,” spent a year at a multiracial Oak Park high school that doesn’t always live up to its ideals.

When “City So Real” premiered at the Sundance Film Festival in January, it had four parts, covering the mayoral election and a swirl of issues surrounding it, including the police killing of Laquan McDonald and the multibillion dollar Lincoln Yards project, which had become the center of a fight over gentrification. James and his producing partner, Zak Piper, also followed an array of long-shot candidates, listened in on barbershop debates and observed elite political dinners. They interviewed local business owners and toured the city’s board of elections, a sausage factory where petitions are subject to byzantine legal challenges.

Image “It rankles me that the city has become the poster child for urban violence,” the director Steve James said of Chicago, which has been central to his previous documentary work like “Hoop Dreams” and “The Interrupters.”Credit…An Rong Xu for The New York Times

Then the pandemic happened. Then the Black Lives Matter protests erupted. And suddenly Mayor Lightfoot’s first term was livelier than anyone could have expected. So James and his crew masked up and took to the streets for Part 5, an 80-minute postscript that has never been screened publicly.

On a Skype call from his home in Oak Park, James talked about a city that had changed dramatically before his camera but in certain ways may never change at all. These are edited excerpts from the conversation.

You made “City So Real” and “America to Me” as docu-series. But aside from Ken Burns’s documentaries, the docu-series as a form hasn’t been that common until recently. Has that changed your thinking about what types of films you want to make?

I think I’ve been trying to make docu-series all along by making really long films. [Laughs.] My favorite thing about television, period, is when you’re fully engrossed in a multipart story and living inside of it. And I have that feeling often as a filmmaker out in the field. I feel like I’m living inside this story, and so it appeals to me to be able to translate that to the screen in a more expansive way.

Did that change your approach in terms of perspective, too? Would there have been an inclination to, say, follow this story from one angle if you had only two or three hours to tell it?

One of the things we were clear about going into this is that we didn’t want to do a more traditional political campaign documentary. I’ve seen many of them, and I’ve loved many of them, but in those films you usually are aligned with one candidate. We wanted this to be more expansive in its point of view — looking at the political process in Chicago through this election, not looking at a specific candidate and their attempt to become mayor. And I didn’t want it to just be about politics or the Laquan McDonald trial. I wanted it to be a portrait of Chicago. I loved the idea of a kind of kitchen-sink approach to telling the story of a city where everything is fair game.

How would you describe the dynamics of this particular mayoral election?

There was a huge cross section of people who decided they wanted to be the mayor of this city, which is a daunting job. The range of people that were passionate about wanting to lead this city was really fascinating to me.

Chicagoans love to brag about how tough it is politically here. And I think that that’s in some ways a virtue, and in other ways it’s part of the problem. The politics here in Chicago are weighted down by corruption and hardball politics, and we don’t always focus on what’s really important. And I think in that way we’re very much like America as a whole.

Willie Wilson was one of 14 mayoral candidates on the first-round mayoral ballot of 2019 after many others had already dropped out or been disqualified.Credit…Chicago Story Film, LLC/National Geographic

Chicago is experiencing, like other cities, the opposite of a great migration in terms of Black populations getting pushed out. How do you see “City So Real” telling that story?

Chicago is arguably the most segregated large city in America. Even the way gentrification is working here is very different than, say, New York City. In Chicago there are large swaths of the South and West sides that are not in any real danger of gentrification in the immediate future. If anything, they’re in danger of becoming ghost towns. And yet, you have other parts of the city where the gentrification is full on, like what’s gone on in other big cities.

You identify and map out the neighborhoods for each scene. Was this your way of getting non-Chicagoans not to think so monolithically about the city?

Chicago is known as the city of neighborhoods. That’s been historically true, and I think there’s still a lot of truth to that. One of the things I love about the series is that we could do things like be with trick-or-treaters on the northwest side, in a largely white community, and then go to Hyde Park and see a largely Black community of trick-or-treaters and then go to a Day of the Dead parade in Pilsen. We could start at the Bears’ playoff game at a South Side bar and then finish it in a North Side bar, and those are two very different worlds, although they are all rabid Bears fans.

Amara Enyia drew early star power and money to her campaign with an endorsement and a six-figure financial contribution from her fellow Chicagoan Chance the Rapper. Credit…Chicago Story Film, LLC/National Geographic

Is there a particular criticism or a point of view that outsiders have of Chicago that especially rankles you?

It rankles me that the city has become the poster child for urban violence. Yeah, we have a really serious problem in Chicago. We absolutely have a serious problem in Chicago, and the city has been struggling with how to deal with that for a long time now. But when Trump uses Chicago as a poster child for murder and mayhem, it’s not true and it’s so reductive. The violence in this city is confined largely to about 10 percent of the city. And that’s unfortunate because there’s a lot of violence.

At what point did you kind of come to the decision do a fifth episode?

When the pandemic hit, I said to my colleagues and then Diane Weyermann at Participant Media, which funded this series, “I really think we should do some kind of postscript that deals with the pandemic.” Diane, because she knows my proclivities for length, said: “OK. Like 15 minutes you’re thinking?” And I was like: “Sure. 15 minutes. Maybe 20.” And we just thought it would be valuable to whoever ultimately buys this series to have that.

And when George Floyd happened, it was like, We’re not doing a postscript anymore. We have got to be out there getting this story because it’s the story of America. It’s the story of this city. It’s also the story of the Lightfoot mayoral [administration] and how she was trying to grapple with and be the mayor of this city at this very difficult time.

What do you expect the city to look like when the pandemic is over?

I think that’s above my pay grade to give a really intelligent answer. I can tell you what I worry about is what a lot of people worry about. I worry that a lot of small businesses are going to go under. That if they’re hanging on at all, they’re hanging on with some federal support and they’re just sort of hoping and wishing that they’ll get through this and things will get back to normal. And then of course, the massive debt that is being racked up by the city to just deal with this and try to keep everyone’s head above water.

It was already daunting before the pandemic hit. I do think there’s a will and determination here and a spirit that we will prevail. We’re not going to turn into Detroit a few years ago. But it ain’t going to be easy.

September breaks global and European records for hottest ever

A Bride Changes Her Mind