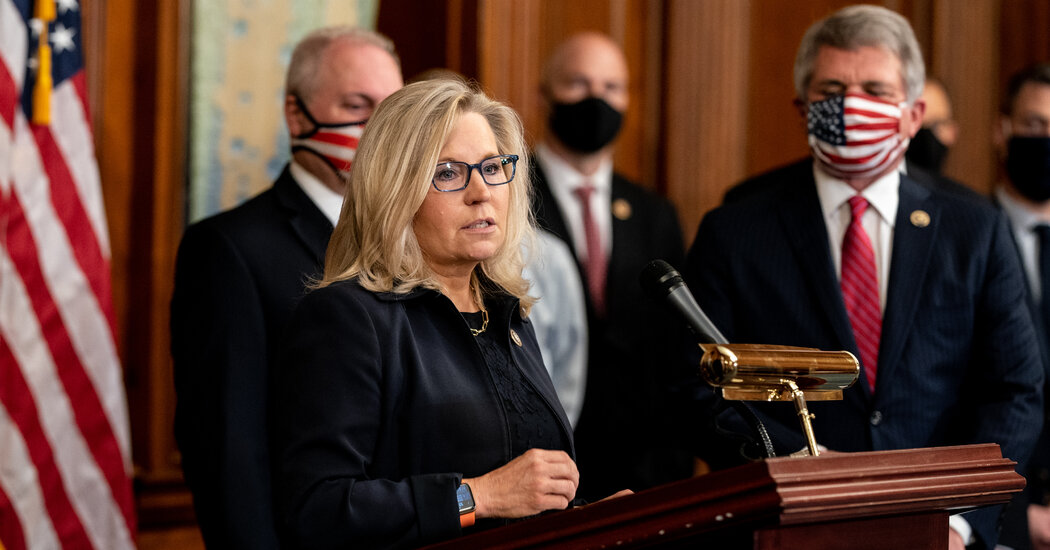 Many of the most vocal Republicans denouncing President Trump’s refusal to concede are out of office or retiring, but some others have started to join them on urging the transition to officially begin.

Representative Liz Cheney of Wyoming, the No. 3 House Republican, has called on President Trump to begin “respecting the sanctity of our electoral process.”Credit…Anna Moneymaker for The New York Times

WASHINGTON — As President-elect Joseph R. Biden Jr. prepares to name his first slate of cabinet appointees, more Republicans are starting to push for the transition to officially begin and calling on their conservative colleagues to openly acknowledge his victory.

Chris Christie, the Republican former governor of New Jersey, called the conduct of President Trump’s legal team, which has indulged in a web of conspiracy theories about voter fraud, “a national embarrassment,” given the blistering dismissals of their lawsuits in court and their failure to produce evidence of widespread improprieties.

“They allege fraud outside the courtroom, but when they go inside the courtroom, they don’t plead fraud and they don’t argue fraud,” Mr. Christie, a longtime Trump ally, said on ABC’s “This Week” on Sunday. “Elections have consequences, and we cannot continue to act as if something happened here that didn’t happen.”

The Trump campaign on Sunday disavowed Sidney Powell, one of the lawyers who had floated many of those baseless claims, even though she had appeared at a news conference alongside Trump lawyers and campaign officials and been embraced by allies.

Senator Patrick J. Toomey, Republican of Pennsylvania, on Saturday congratulated Mr. Biden and Vice President-elect Kamala Harris on their victory, saying that the president had “exhausted all plausible legal options to challenge” the state’s result after a federal judge dismissed a Trump campaign lawsuit challenging the election outcome there.

Many of the strongest denunciations of the president’s refusal to concede have come from Republicans like Mr. Christie and Mr. Toomey, who are no longer in office or have announced their retirement. But as Mr. Trump has continued to deny the results of the election in an unflinching assault on the democratic process, a few more sitting lawmakers have tiptoed up to join them in subtly urging the president to at least begin the transition process.

Representative Liz Cheney of Wyoming, the No. 3 Republican in the House, on Friday became the most senior Republican to urge Mr. Trump in a statement to begin “respecting the sanctity of our electoral process” should the nation’s courts continue to reject his legal team’s challenges to the outcome.

Still, most Republican lawmakers have not challenged Mr. Trump, in part because they fear that a public acknowledgment of Mr. Biden’s victory could undercut support from their conservative base before two critical Senate runoff elections in Georgia in January.

In a nod to those concerns, Mr. Christie suggested that Mr. Trump would better spend his time supporting the Republican candidates in Georgia “rather than looking in the rearview mirror.” (The president spent much of his weekend at his golf course in Virginia and deriding Republicans, including Ms. Cheney, Mr. Toomey and Gov. Larry Hogan of Maryland, who publicly undercut his barrage of false claims.)

The few Republicans who made their own ascertainment in the 15 days since Mr. Biden won the election were increasingly blunt in their assessment of Mr. Trump’s prospects for overturning the results. Senator Lisa Murkowski, Republican of Alaska, released a statement condemning the president’s pressure campaign on state legislatures as “not only unprecedented but inconsistent with our democratic process.” Mr. Hogan responded to Mr. Trump’s criticisms by suggesting that the president “stop golfing and concede.”

“Here again in Michigan, it’s not a razor-thin margin — it’s 154,000 votes,” Representative Fred Upton of Michigan, one of the first congressional Republicans to congratulate Mr. Biden and Ms. Harris, said in an appearance on CNN. Mr. Trump has made false charges of widespread fraud in Michigan and pressured state legislators to undo the results, but “154,000 votes is plenty to overcome,” Mr. Upton said. “I mean, it’s over.”

Other Republicans were more tentative on Sunday, but they edged toward recognizing Mr. Biden’s victory by amplifying calls for the Trump administration to allow the transition to begin, pushing for Mr. Biden to begin receiving intelligence briefings as part of that process. Senator John Cornyn, Republican of Texas, said on Twitter that “I agree briefings should occur” as he shared a clip of Ron Klain, the incoming White House chief of staff, warning of the consequences of withholding classified information and access to agency officials.

“It’s past time to start a transition, to at least cooperate with a transition,” Senator Kevin Cramer, Republican of North Dakota, said on Sunday, even as he insisted that Mr. Trump should have additional time to pursue legal challenges to the outcome of the election. “I’d rather have a president who has more than one day to prepare.”

Members of Mr. Biden’s transition team, even as they announced plans to unveil cabinet appointments on Tuesday, continued to warn that the new administration would be severely handicapped without advance intelligence briefings and updates on plans to develop and distribute a coronavirus vaccine.

Jennifer Psaki, a senior adviser to the transition team, said on CNN’s “State of the Union” that F.B.I. background checks, a key part of the confirmation of cabinet secretaries, could not be done until the General Services Administration “ascertained” Mr. Biden’s victory. The process would give Mr. Biden and his staff members access to federal resources, data and personnel.

The transition team wants to “talk to the people doing the job right now so that we can be ready,” Representative Cedric Richmond, a Louisiana Democrat who is set to leave his seat for a role in the Biden administration, said on NBC’s “Meet the Press.”

John R. Bolton, Mr. Trump’s former national security adviser, urged his party to speak out against the president’s behavior, calling on “senior Republican leaders to join those who have begun to come out and say, ‘Trump’s behavior is inexcusable.’”

“Look,” Mr. Bolton continued on “State of the Union,” “the Republican Party is not going to be saved by hiding in a spider hole. We need all of our leaders to come out and say, ‘The election is over.’”